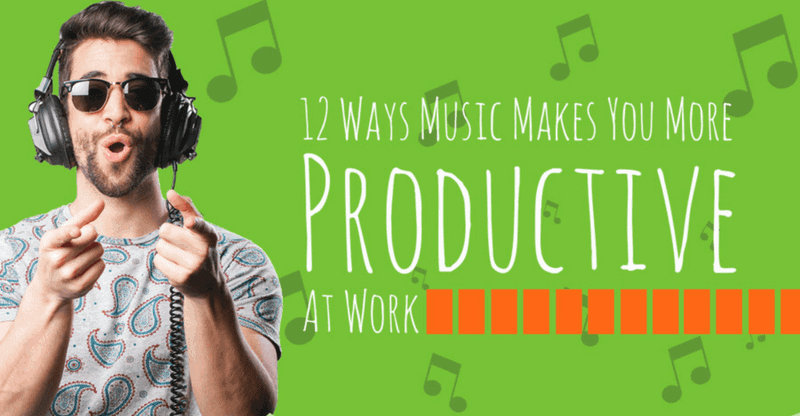 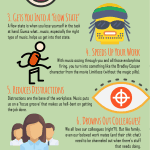 While sometimes it’s purely to block out irritating noises or people, or other times just to give us a welcome burst of energy, listening to music at work makes us more productive and helps with concentration and focus; it even makes us happier.

It’s proven that music has a variety of health benefits, but can music really make you more productive?

In a study by Lesiuk in 2005, the results found that it wasn’t the music itself but rather the mood elicited by certain songs that increased output (although certain types of music work better for particular tasks).

Jahncke et al studied the effects of workplace conversations as a negative influence on focus. 48% of participants noted intelligible talking as being the sound that distracted them most.

This highlights the negative effect lyrics could have. For tasks that don’t require verbal architecture, lyrics can have a positive or calming effect as found by Lesiuk.

Tze and Chou, 2010, found that music with a ‘higher intensity’ is more distracting and had a greater effect on participant’s concentration. They used classical, hip hop music, and silence as a control.

So hip-hop, rap, and dance music might be a no-no when trying to concentrate. In a study dissected by MetaFilter, 56 employees working on basic computer tasks were found to be more productive when no music was playing compared to another group listening to music.

The Effect of Music on the Brain

University of Illinois researchers found that listening to music in ‘all types of work’ increased work output up to 6.3% over a control group.

Another group of researchers (Ferreri et al, 2013) found that background music helped to activate the ‘encoding of verbal material’ in participant’s brains. This would be highly useful for anyone listening to music while repeating phrases to remember.

It’s generally accepted that learning to play a musical instrument helps to keep the brain young (and if you want to get really creative, try making your own homemade instrument).

If you’re coming to it late in life, you might be better off choosing a relatively simple instrument like the ukulele, as it’s one of the easiest instruments to learn with lots of simple ukulele songs you can learn without much effort.

1. Instant Mood Lifter
A great piece of music is an instant mood lifter. Plenty of scientific evidence backs this up – we’re happier bunnies when listening to music.

2. Makes Repetitive Tasks More Enjoyable
Oh, the drudgery of repetitive tasks! Music shakes a stick at those dull ‘copy-paste’ tasks and makes them even fun!

3. Gets You Into A ‘Flow State’
A flow state is when you lose yourself in the task at hand. Guess what…music, especially the right type of music, helps us get into that state.

4. Speeds Up Your Work
With music oozing through you and all those endorphins firing, you turn into something like the Bradley Cooper character from the movie Limitless (without the magic pills).

5. Reduces Distractions
Distractions are the bane of the workplace. Music puts us on a ‘focus groove’ that makes us hell-bent on getting the job done.

6. Drowns Out Colleagues!
We all love our colleagues (right?!). But like family, even our beloved workmates (and their chit-chat) need to be channeled out when there’s stuff that needs doing.

7. Provides Company In A Quiet Office
Not all workplaces are noisy places. Far from it. A workplace that’s too quiet can be just as big a  productivity suck. Music gives you a little oasis of company so you don’t go all lonely (just don’t go singing out loud).

8. Brings Out Your Creative Side
We are not cogs in a giant machine, we’re people. And people are inherently creative (they just may not know it). Music is creativity personified, and listening to it rubs off on you too.

9. Makes You Wanna Move
The ‘office chair slump’ is a symptom of spending too long staring at your screen. With some Papa’s Got a Brand New Bag pumping into your eardrums it would be humanly impossible not to have a little wiggle in your chair.

10. Adds A Virtual ‘Do Not Disturb’ Sign
The office equivalent of the ‘do not disturb’ sign, the headphones on head pose (the bigger the headphones the better) says loud and clear ‘I’m busy doing deep work, don’t pester me’. Throw those pesky earplugs in the bin and get some cans.

11. Makes You More Sociable
Come again, more sociable listening to music? Yup. You may be locked away behind a set of head cans while you’re doing your work, but when you take off those muffs you’re almost brimming with conversation you want to unleash.

12. Stops The Clock Watching
Too much clock watching is a dangerous thing. Music helps you find that flow state and before you know it, you’re immersed in the task and the day is over.