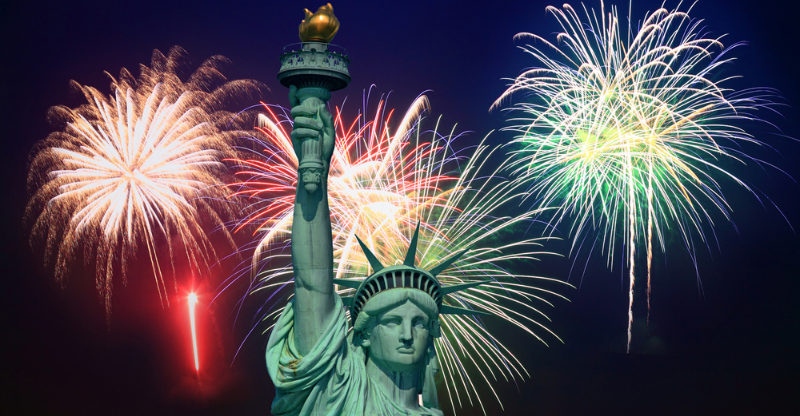 Patriotic anthems can be found throughout America’s diverse musical genres. Country hits like ‘Only in America’ celebrate the American dream. Bruce Springsteen’s introspective ballad, known simply as ‘Sandy,’ reflects on the American culture he grew up around. Thomas Rhett’s dedication to his fans, ‘American Spirit,’ is an ode to small towns across the nation.

All of these songs encompass what the celebration of the 4th of July represents: freedom, independence, and family traditions. Add these celebratory tracks to your playlist of 4th of July songs.

One of Bruce Springsteen’s early efforts, this emotive ballad continues to be a favorite among fans of The Boss despite its ’73 release. The songwriter often refers to the tune as ‘Sandy,’ and he wrote it while trying to describe the culture surrounding New Jersey’s boardwalk area when asked about it. The “Sandy” character referenced in the lyrics represents several different women Springsteen loved while he lived in Jersey.

The son of a veteran, Toby Keith, has released many patriotic singles over the years. His more recent tune, ‘Happy Birthday America,’ takes a more sobering approach than his previous hits like ‘Courtesy of the Red, White, and Blue (The Angry American).’ With this number, despite still celebrating the freedom he lives under in the US, he’s pondering where the country is headed and reflecting on hard times endured by citizens.

Related: Celebrating a birthday? Check out these good birthday songs.

A patriot at heart, Lee Greenwood’s love of his home country often reveals itself within his works. His signature song, ‘God Bless the U.S.A.,’ was one he had wanted to write for a long time. He finally got his chance in ’83 when he sat down to work on new material. With a focus on unity across the nation, he played the newly written tune in the middle of a set for an unsuspecting audience, and they loved it. The enduring single originally appeared on his album, If There’s Any Justice.

Related: This song features on our list of the best patriotic songs.

One of Blake Shelton’s many top 20 singles, ‘God’s Country’ takes a heavier instrumental approach due to the songwriters’ backgrounds but maintains traditional country values within its lyrics. Devin Dawson and Hardy wrote the track, and they both come from heavy metal backgrounds. With driving guitars and a hard rock beat backing the hit, Shelton sings about the unwavering spirituality in rural areas of America. His own inspiration while recording the track came from his upbringing in the central state of Oklahoma.

Festive and fun, it’s hard not to bop along to Miley Cyrus’ breakout solo hit, ‘Party in the U.S.A.’ The infectious tune is autobiographical, with lyrics documenting her nervous journey from small-town Tennessee to Los Angeles as a pop star in the making.

Related: Find this song on our playlist of prom music.

Country singer Thomas Rhett (son of fellow country singer Rhett Atkins) uses moving imagery to paint a beautiful picture of small-town America with this song. From riding down dirt roads to lyrical snapshots of children running through sprinklers in the summer, Rhett dedicated the classic country release to his fans as a way to thank them for their longtime support.

Originating as a poem, the patriotic song ‘America the Beautiful’ has been around since 1926. In ’72, Ray Charles released his own version, notably rearranging the structure and singing the second verse first. His rendition was released in conjunction with the celebration of America’s Bicentennial anniversary of declaring independence from Great Britain.

Related: Check out these popular songs about America.

Only in America – Brooks & Dunn

The wide-ranging individual dreams of Americans from all walks of life are celebrated with country duo Brooks & Dunn’s ‘Only in America.’ As Ronnie Dunn sings about dreaming “in red, white, and blue,” he focuses on a message of equality with everyone getting a chance to live out their own unique version of the American dream.

With his album American Saturday Night, Brad Paisley wanted to move away from his more comedic hits like ‘I’m Gonna Miss Her,’ which hilariously features a man having to choose between his love of fishing and his wife. For the album’s title song, writers Ashley Gorley and Kelley Lovelace helped him pen a more moving single focused on all the diverse ways Americans spend their weekends, from “French kissing” to “eating Italian ice.”

Related: Need more things to do this weekend? Here are some songs about Saturday night.

While doing charity work for the Military Warriors Support Foundation, country singer Coffey Anderson met veteran Craig Carp while helping him find a home. Anderson was so moved by Carp’s story that he wrote the song ‘Mr. Red, White, and Blue’ in honor of him. After its debut, the single expanded into a dedication to all military members who have served and are currently serving America.

Related: Pay your respects with our soldier songs list.

“You can’t break an American heart.’ Faith Hill uses her powerful vocals and commanding stage presence to tell stories with a lot of grit and grace. This duality is especially poignant in this single. The lyrics tell the story of a determined woman who, despite facing hard times, valiantly overcomes them because she believes in the American dream.

Fourth of July – Fall Out Boy

“You and I were fire.” Fall Out Boy bassist and songwriter Pete Wentz uses the intensity of Independence Day celebratory fireworks to convey the beauty of a former flame with ‘Fourth of July.’ Though their love faded quickly, he couldn’t forget about her. He compares her allure to “Versailles at night.”

A perfect party song, Kelis’ ‘4th of July (Fireworks)’ is a great addition to your Independence Day celebration playlist. While the title eludes to the holiday celebrating freedom, Kelis focuses on a love that sets her free in the lyrics. The club beat spurring the song along will have party-goers dancing in no time.

Related: Celebrate freedom with the best songs about breaking free.

This Land is Your Land – Woody Guthrie

Songwriter Irving Berlin penned one of America’s most treasured patriotic songs, ‘God Bless America.’ Folk songwriter Woody Guthrie wanted to write a song in response to Berlin’s hit, and eventually, he wrote ‘This Land is Your Land.’ While many often associate the mid-’40s single as a patriotic track celebrating America, at the time of writing it, Guthrie actually intended to take a critical stance against the US regarding workers’ rights. Despite this, the song has become one of the country’s unofficial anthems.

Related: You can hear this song on our list of good folk songs.

Though country and western songwriter Johnny Cash made a name for himself with his baritone voice and catchy lyrics, his bassy pipes lent themselves well to another genre, the spoken word. The poetic track ‘Ragged Old Flag’ features spoken word material by the country crooner as he converses with an old man in a town square as they gaze upon a tattered but resilient American flag, still maintaining its glory despite wear and tear.

An upbeat, celebratory track great for an Independence Day bonfire in the country, this song finds Shooter Jennings embarking on a cross-country road trip with the fireworks-fueled holiday surrounding him and his girl along for the ride. He originally wrote the tune satirically, mimicking the bands taking advantage of the Red Dirt Country movement cropping up at the time. Ironically, the song ended up being one of his most popular requests.

What started as a smear term for American troops became a rallying cry for soldiers during the Revolutionary War. British troops used the term “Yankee” in a derogatory manner regarding American patriots fighting for freedom. When America started winning the war, they adopted the word and rebranded it as an empowering term. The song ‘Yankee Doodle,’ written by Chorale, became one of the troops’ favorite songs to sing after hard-won battles fighting British forces.

This military march tune dates back to 1906. Composer and playwright George Cohan wrote ‘You’re a Grand Old Flag’ for a musical he was producing at the time, George Washington, Jr. The marching band song is an ode to America’s flag and her brave military.

Written for the ’80s movie he starred in, The Jazz Singer, Neil Diamond pays tribute to the US tradition of welcoming immigrants to the country with this song. Raised in New York, Diamond was exposed to many different cultures. His own family, on both the paternal and maternal sides, immigrated to America from Poland and Russia. This single celebrates the nation’s “melting pot” atmosphere.

Country music produces many patriotic tunes with freedom as its main theme. Country songwriter Phil Vassar’s 2002 effort, ‘American Child,’ explores the time-honored rags-to-riches American tale. Partly autobiographical, the song begins with a child playing baseball in “Nowhere, Virginia.” As he grows up, he lives out his version of the “American dream” by taking his place in the limelight, then starting a family of his own.

Where the Stars and Stripes and the Eagle Fly – Aaron Tippin

After the 9/11 attacks in 2001, the top two subsequently released country songs on the country chart were Alan Jackson’s gentle ‘Where Were You (When the World Stop Turning)’ and Aaron Tippin’s powerful ‘Where the Stars and Stripes and the Eagle Fly.’ Tippin’s moving single proved to be a warmly embraced anthem for Americans at the time. The hit stands for the nation’s unwavering bravery and pride amid tragedy.

This soothing love song by songwriter Aidan Gallagher uses the 4th of July as the backdrop of a passionate romance. Fireworks and night sky stars set the stage for the two young lovers’ relationship to blossom into a lifelong partnership. Before embarking on a music career, Gallagher got his start on the Nickelodeon show Nicky, Ricky, Dicky & Dawn.

More Than a Flag – Brandon Davis

Released on his 2021 album by the same name, Brandon Davis’ ‘More Than a Flag’ emphasizes the importance of learning what the American flag stands for from a young age. At the song’s heart are the principles the flag represents, from honor and sacrifice to grace and truth.

Am I the Only One – Aaron Lewis

After Aaron Lewis headed up the popular rock duo Staind for many years, he decided to strike out on his own and try his hand at a solo career. After the release of his swampy single ‘Country Boy’ did so well, he followed up the release with other tunes like ‘Am I the Only One.’ The patriotic anthem quickly climbed the country charts to number one. Fans related to the single, which asks the question if he’s the only one willing to stand up for what’s right in America.

“It’s a kid with a chance. It’s a rock n roll band.” Country crooner Rodney Atkins scored another top hit with his inspiring track ‘It’s America,’ a song that focuses on Americans’ triumph over struggle and adversity. At the time of the single release, country band Old Dominion was just starting out. Atkins helped get their name out there by giving them a cameo in the music video at the part when he sings about a rock and roll band.