Alternate Picking – 8 Exercises to Speed Up Your Playing 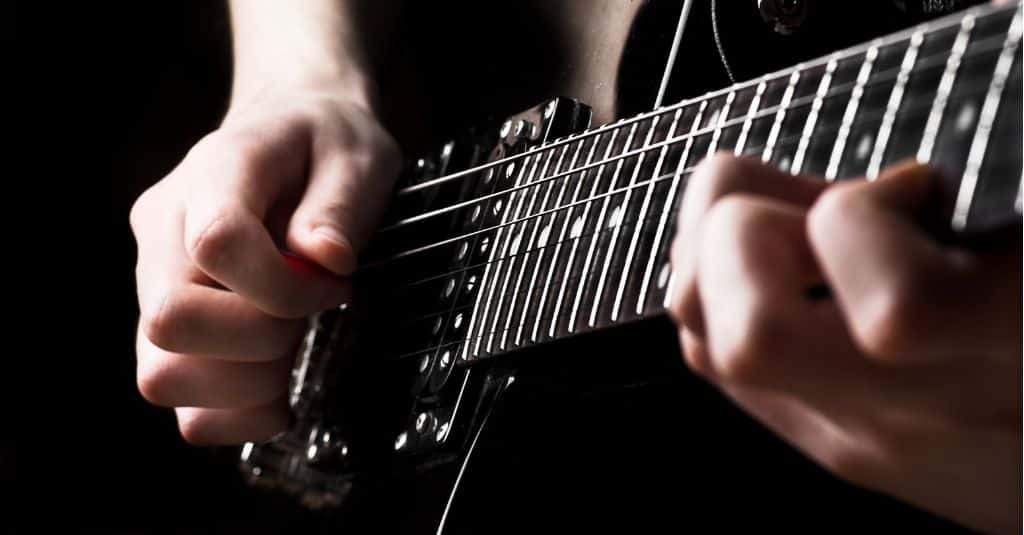 If you’re a beginner learning to play the guitar, it might feel natural to downpick (striking down from the top of the string) everything you play.

This movement feels natural to do, to start with. However, pretty soon, you’ll be frustrated by how limiting it is.

The secret to increasing speed is simple: pick upwards after each downstroke. This is what’s known as ‘alternate picking’ which improves speed, timing, and accuracy (and is required learning for another technique common in shred metal called economy picking).

In this article, we’re going to take you through some exercises to help you improve your picking technique. We’ll start very simply, then progress onto some tasty licks that, as well as improving your playing, will impress your friends.

What is Alternate Picking?

Alternate picking is one of the most common picking techniques that, in contrast to other styles such as sweep or hybrid picking, follows the pattern down-up-down-up-down-up.

To get started in good habits with, try putting on a metronome – at 60bpm to begin with – then with a guitar pick (any type of guitar pick will do, but preferably a firm one for more attack) play a downstroke on your low E string with each beat, like this:

When you’re used to that, try adding an ‘up’ in between each beat. Your hand already needs to go up, to get into the position to downstroke again. This just involves hitting the string as you go up.

Got it? Cool! Now, try it on the rest of your strings. When you master that, you’re ready to move on to our selection of exercises. We have 8 to take you through, so grab yourself a drink, pick up your guitar and get comfortable.

Time to look at some exercises that sound a bit more melodic than your rhythmic warm-up on each open string. First, we’re going to play one that uses all the notes.

Note: we’ll be using tab in the following exercises, check out this guide on how to read tabs if you need a quick refresher.

The chromatic scale is an excellent exercise to stretch your fretting fingers out and get them used to playing small intervals, as well as a superb way to work on this technique.

This scale, which ascends chromatically, using every single note, can be played using four notes per string, as is shown in the diagram below.

Play the scale slowly, making sure that your pattern is down-up, down-up. Also, take care to ensure both hands are completely synchronized, so it doesn’t sound messy. Playing using a metronome will help to encourage this.

Now it’s time to apply it to one of your scales. We’re going to use the B natural minor scale, as it is suited to heavy metal, neo-classical and dark rock genres that often require speedy playing.

Even though it’s just a scale, it sounds pretty cool, doesn’t it? Cooler still is using that scale in our next exercise – sequencing.

3) Sequencing in the Minor Scale

Sequencing involves taking the scale and creating a playing pattern within it. These patterns are created by going forward several steps, then back a few, then forward the same amount again, then back by the same amount. There’s an example of sequencing below, which goes forward 4 steps, back 1, then keeps going through the scale.

If you practice this exercise, you’ll find that you’re shredding neo-classical sounds akin to Yngwie Malmsteen in no time. In case you’re wondering why it already sounds familiar, this sequencing pattern is heavily inspired by Bach’s ‘Toccata and Fugue.’

In our very first sequencing exercise, we looked at playing down-strokes on the beat and up-strokes in between. It’s possible that, as you’ve progressed since then, you’ve already been playing notes that are faster than your initial attempts.

This exercise does that very consciously, as you play four notes per beat. Accenting the first of each four will help you to stay in time, as we’ve marked on the TAB below.

As always, practicing with a metronome is the key to success here. Start off with a slow, steady tempo, and don’t speed it up until you know you’re ready. When you nail this, congratulations. You’re shredding :).

Mixing quavers and semiquavers up with some triplet rhythms can be a way of really making your lead playing interesting. It’s also quite a challenge. Again, we’ve made it clearer for you by writing the timing underneath the tab.

The trick here is to accent the first of each three notes that you strike, then make sure it coincides with each tick of your metronome. Try to resist the urge to play D-U-D, D-U-D, D-U-D. That picking pattern has its place, but it’s not what we’re learning here. Using alternate picking instead of D-U-D, however unnatural it feels to start with, will make it easier to play triplet rhythms with more speed and to move between the strings smoothly.

Talking of moving between the strings smoothly, it’s time to start skipping them. Until this point, all of our exercises have moved between strings one at a time. String skipping involves jumping over one or more strings mid-pattern. This is used a lot in heavy metal and shred genres and can produce some fast, varied and exciting sounds. 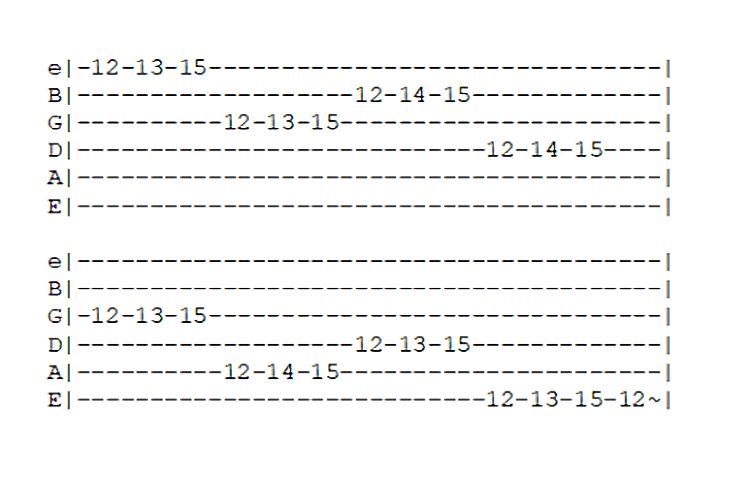 This dark-sounding, diminished exercise might feel tricky to start with, and you might be tempted to slip into old habits of downward picking. However, as with all the other activities, it’s important to persevere if you want your speed and skills to develop.

Intervals can take any form, from harmonic fifths to melodic octaves. Here, we’re going to look at melodic fifths. These are pretty easy to play and give you a dancey, uplifting kind of sound that can work well to build anticipation in verses or pre-choruses and also sounds easy on the ear for a practice routine.

When you get used to pattern one, try this interval pattern, which covers more strings. 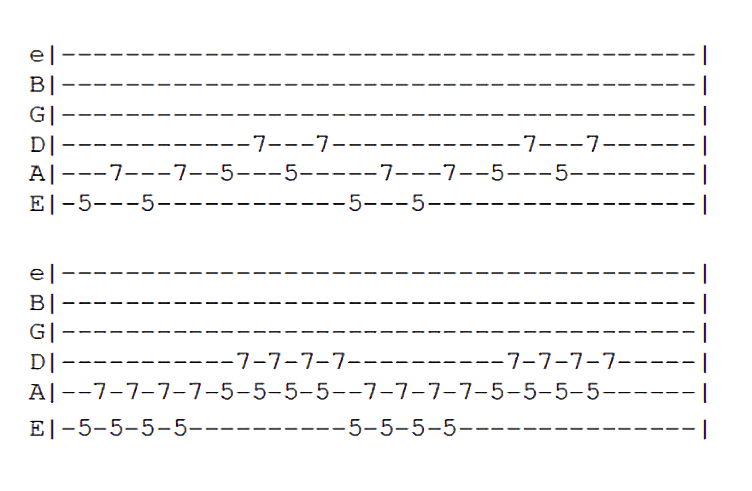 You can then try including some ‘inside pivots’ in the example below.

As you can see in the third and fourth notes, the down-up pattern requires you to play down on the string furthest from you, followed by an upstroke on the one closest to you. Buono’s video speeds up from crotchets to quavers after the first four bars, making it an effective and progressive workout. It also sounds great.

If you’ve made it this far, well done!  For our final exercise, we will look at building picking control even further as you get creative with your dynamics.

Placing accents (louder notes) in unusual places, rather than always on the start of the bar or beat, is an excellent way of developing your control and picking strength. As well as this, it can increase your technical understanding of how beats are divided.

In this fun, pentatonic exercise, the accents are broken up so that some are at the start of each pattern, while some are in the middle and some at the end. This dynamic variation gives an extra layer to your lead guitar playing and works to make it shapely and intriguing.

Alternate picking is an essential technique for lead guitarists, especially in rock and heavy metal genres. There are many places this can be used, from single-string patterns to melodic intervals to string skipping exercises. Each of these demands slightly different techniques.

Picking with an ‘outside pivot’ is most common, as it feels natural and fits in with a lot of patterns. However, sometimes a lick will require what is called ‘inside picking,’ which involves striking down on the one furthest from you and up on the one closest. When you get used to this, this technique actually has the potential to be even faster than ‘outside pivot’ picking, as the distance between your strikes is closer.

Working through the exercises above, you should start slowly and build your speed only when your accuracy is achieved. Using a metronome is the only way to be sure that you’re staying in time and will also help you to measure your progress.

Embracing this technique will make playing so much easier, in the long run, than going down on every note. Good luck and let us know how you get on.

If you liked the three video examples, we have some good news. These lessons with Chris Buono were taken from a course called ’Guitar Gym: Alternate Picking Workouts’ from the superb online guitar school TrueFire. In the course, they cover a heap more than we’ve had time to cover, with an emphasis on improving precision, timing, endurance, and speed. For our readers, TrueFire has offered us a 25% discount on the price of the course. Check it out here, and use the promo code ‘ZING25’ to get your discount. Enjoy ?