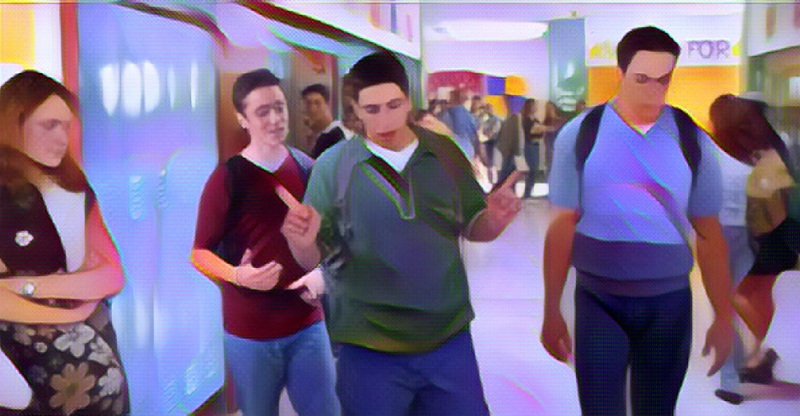 “This one time, at band camp…”

American Pie is a comedy film released in 1999 that gained a huge following among young people and eventually had three sequels. If you grew up in the late ’90s and ’00s, you’re probably familiar with the American Pie movies!

In addition to an original score by David Lawrence, the film and its accompanying soundtrack album contained several interesting songs. Keep reading to learn about the music from the American Pie soundtrack.

This track plays while the American Pie opening credits start, and audiences see the high school for the first time. It’s about a lonely, emotionally tortured guy who wishes to meet a new girl who will add excitement and passion to his life. The song highlights the naivety of high schoolers and helps introduce viewers to the characters.

Related: School is in session on our playlist of songs about school.

We see the guys getting what they want in various scenes while this song plays. It’s about someone who loses their sense of self and good judgment while in a relationship they can’t let go of. It highlights the emotional side of the characters, while most of the film’s featured tracks don’t.

Related: Need help moving on? Listen to our list of letting go songs.

This song plays as Heather appears at Oz’s workplace and is served a hot dog. It’s about someone struggling with life and “an overload of information” who hopes to keep getting by each day. The protagonist is also spurred on by love for a romantic partner. It’s a gentler offering compared to many other songs on the soundtrack album and in the film.

The guys are talking about their pact at Dog Years when this plays. As the title suggests, it’s about a narrator who feels down, lost, and confused about life in general. It’s often considered an anthem of its generation that still holds up well enough for modern listeners to appreciate.

Related: If you’re feeling “super down,” check out these really sad songs.

Michelle says a line about “this one time, at band camp” when this begins to play. It is often remembered for highlighting this famous quote. It’s a late ’90s rock ballad about someone who can’t give a romantic partner everything they want out of a relationship. It’s one of the most well-known tracks on the album that is still popular today.

Find Your Way Back Home – Dishwalla

While traveling to Stifler’s lake, Michelle tells Jim a story as this Dishwalla track plays. The lyrics tell a third-person narrative where the narrator sings to and about a lost, lonely protagonist and trying to get back home to a place in life that makes sense.

Related: You’re not the only one feeling alone. Here’s our lonely songs list.

Stranger by the Day – Shades Apart

This plays as the guys are talking and see Sherman with a girl. The song highlights heightened and overly dramatic teen emotions and breakup anguish, with lyrics highlighting the protagonist’s frantic feelings and deep confusion with life as his relationship with the girl he loves fall apart.

Related: Maybe you need to let go, but here’s our playlist of ex songs.

‘Summertime’ is used to start the end credits of American Pie. It’s about enjoying all summer has to offer by allowing oneself to be carefree and let go of past worries. The song is unique in that the protagonist is summertime itself, asking the listener to escape into the sunny weather.

This Ska song by The Loose Nuts appears on the American Pie soundtrack album. It also appears on The Loose Nuts’ own album, Oh God Help Our Fans, from 1998. The track was written by Ben Brewer.

This Sugar Ray track is playing when Stifler teases Oz about his girl troubles. It seems to be about a protagonist being driven crazy by someone else’s disrespect and lies—most likely a romantic partner or serious love interest who is playing games with his heart and mind.

Related: Feeling disrespected? Check out these classic songs about respect.

This song plays at Stifler’s party in the background. Sherman is telling Kevin and Jim about his plan. The protagonist sings of a girl who thinks she’s special and deserves everything she wants but lies about her true feelings and seems to have emotional baggage to unpack.

Man with the Hex – The Atomic Fireballs

Vicky reveals something personal to Jesica when this song plays. It’s a swing-style track with unusual lyrics about a powerful and likely evil man who wants to bring harm to others; whether it’s meant to be pure fantasy or speaks to a more realistic situation is unclear.