8 Classic Tracks from the Back to the Future Soundtrack 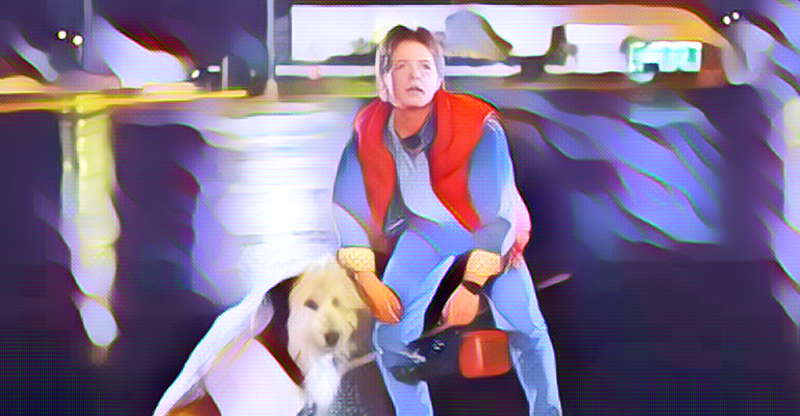 Actor Michael J. Fox starred as Marty McFly in the hit movie Back to the Future in 1985.

The sci-fi classic features him working overtime, saving his parents’ relationship (and his own skin) by inadvertently going back in time to 1985 and pulling double-duty by trying to save his eccentric scientist friend, Doc Brown.

Travel back in time with this diverse ’80s-inspired Back to the Future soundtrack album. Great Scott!

The Power of Love – Huey Lewis and the News

Huey Lewis was hired to write a song for the movie, and in true artistic fashion, Huey had trouble adhering to deadlines. By the time the song was completed, filming had already wrapped. The only scene ‘The Power of Love’ would fit was a transitional one featuring the main character Marty riding his skateboard from his friend Doc’s house to school.

Related: Find this song on our playlist of love songs of the 80s.

Fleetwood Mac co-founder Lindsey Buckingham went solo for this tune specifically written for the Back to the Future soundtrack. The eclectic tune plays through protagonist Marty McFly’s radio in a scene right before he gets a call from the eccentric “Doc Brown.” The song’s lyrics give life to Marty’s future struggles involving loneliness and desperation in the movie’s storyline.

Related: Listen to more songs about being alone and sad.

Heaven is One Step Away – Eric Clapton

The street bum known as “Red” witnesses Marty’s chaotic return to the present when he reappears in 1985 with his famous DeLorean car. In the movie, Red was known to listen to music all night long on a small radio he kept with him at all times. Eric Clapton’s ‘Heaven Is One Step Away’ is one of the songs played on Red’s radio as Marty successfully navigates his way “back to the future.”

The Wallflower (Dance with Me, Henry) – Etta James

Etta James co-wrote this romantic number, and it plays on a jukebox in Back to the Future’s famous eatery, Lou’s Diner, as the movie goes back in time to 1955. During the scene featuring the song, a boy and girl dance to it by the jukebox as it plays in the diner. The song was first released on James’ 1961 album, Good Rockin’ Mama.

Related: Dance with someone special with this list of dancing music.

This instrumental tune featuring saxophone dates back to the 1940s when Jimmy Forrest first wrote it while he was part of the Duke Ellington Band. Though lyrics were ultimately put to it, the movie went with The Starlighters’ instrumental version. It is featured during a flashback scene in 1955 at a school dance when the main character Marty is about to get into a fistfight.

Earth Angel (Will You Be Mine) – Marvin Berry & The Starlighters

Marty McFly has to go back in time to keep his parents together, so he doesn’t get snuffed out of existence. Marvin Berry & The Starlighters, a band comprised of fictional characters, have several songs featured in the film, with ‘Earth Angel (Will You Be Mine)’ being one of them. The song plays as Marty’s parents, George and Lorraine, kiss back in time in 1955.

Related: Feel the romance with this playlist of kissing songs.

“I guess you guys aren’t ready for that. But your kids are gonna love it.” Marty McFly utters these famous words in a scene towards the end of the movie after having just played the song ‘Johnny B. Goode’ with the famous Starlighters band at a dance while still stuck in 1955. Chuck Berry originally wrote this rock ‘n roll classic in the mid-1950s.

Related: This one appears on our playlist of the best rock ‘n roll songs, of course.

Back in Time – Huey Lewis and the News

Huey Lewis and The News were all the rage in the mid-80s, hence why the band got another song included. This one plays during the end credits.

Related: Don’t waste any time—listen to these time songs.