Banjo Anatomy – The Parts of a Banjo Explained 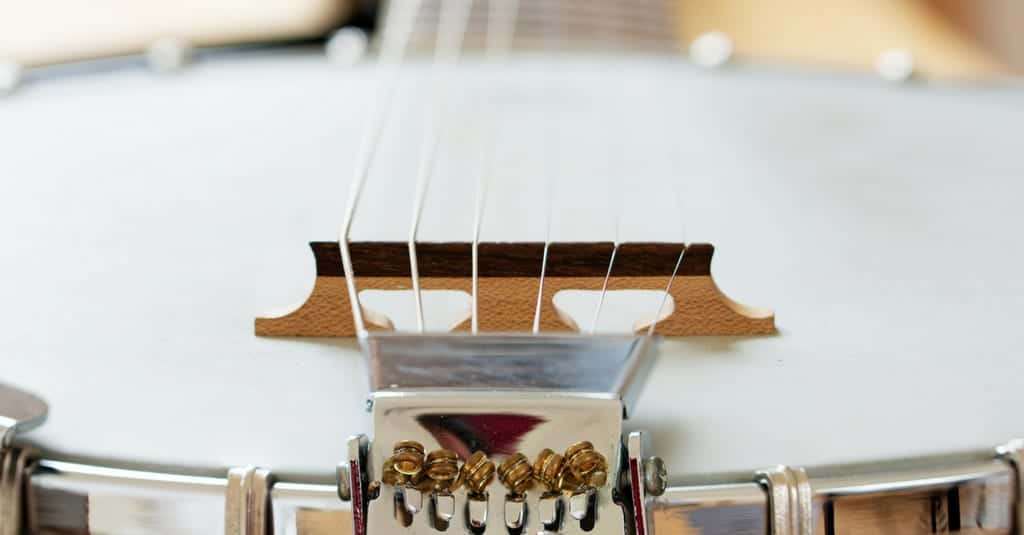 If you’re just starting out with the banjo, it’s good to know what the parts of a banjo are called and what they do.

While there are many types of banjo, the parts are broadly the same.

In this article, we take a closer look at the main components and explain what they all do.

First, take a look at this banjo parts diagram: 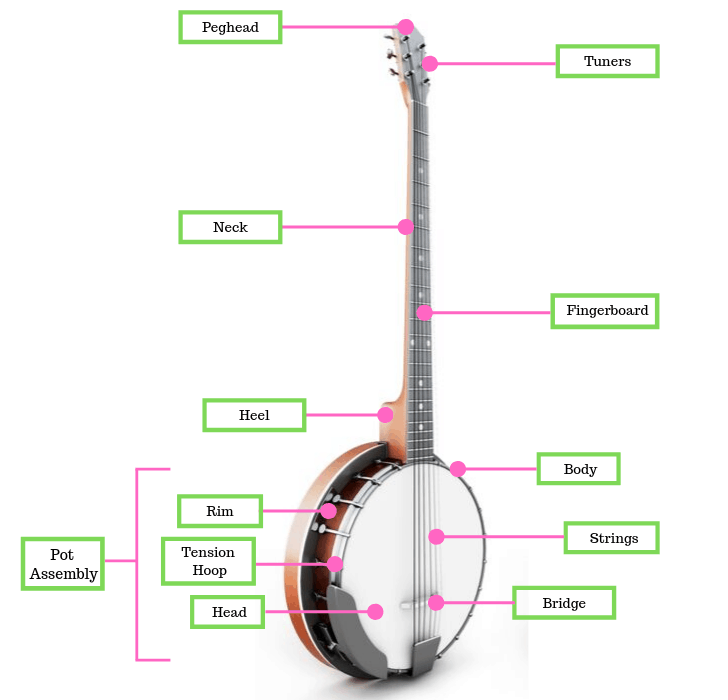 The peghead is another name for the headstock, which contains the instrument’s tuning pegs. It is found at the very end of the neck, at the most faraway point from the body of the instrument. If you take a closer look at a peghead, you can expect it to have an overlay, which joins it to the neck, a thin sheet of material known as the truss rod cover and a nut comprised of either wood, plastic, or bone.

Banjo tuners come in two different designs. The first type is similar to those found on a guitar, which stick out the sides of the headstock, whereas the others are known as planetary style and point outwards from the back of the neck. There are also geared and friction-based models available. Most musicians seem to favor geared versions as they are more efficient at holding strings in tune, than friction varieties. Friction tuners are lighter than geared tuners and can be slightly more pleasing to look at too.

The neck itself is made out of wood, however, its length can differ depending on the model of banjo and the scale. For example, tenor and baritone designs will include a longer neck than a soprano banjo, which is the smallest of the latter.

Between the neck and the fingerboard, you’ll find a metal truss rod, which gives the instrument some extra stability and flexibility by allowing you to adjust the string height and tension across the fretboard. This means you can tailor the string positioning to make them more comfortable to play.

The fingerboard is a piece of solid hardwood, such as ebony or maple, that sits on top of the instrument’s neck. This area takes a beating from your fingers as you play, so manufacturers often incorporate a piece of high quality, durable wood here. To help you play in key, there are usually inlays which mark the frets along the entire length of the fingerboard.

Several types of tonewood can be used in banjo design.

The heel overhangs the end of the neck at the body end and the pot, so it can secure both together with metal bolts. The heel is often made from a type of sturdy, engraved metal for a touch of extra class, or can be a plain cut which looks a little simpler.

Banjos have a floating bridge, meaning it is not actually attached to the head but is instead held in place thanks to tension in the strings. The best thing to look for in a bridge is a heavier, sturdy design as this produces an overall better sound from the instrument. With that in mind, if you’re buying your first banjo, don’t get too concerned about bridges, there’s always the option of replacing it for a higher quality version further down the line.

This is sometimes called the ‘pot’ and is tambourine shaped, consisting of a rounded, wooden or metal rim and a head (or vellum), similar to a drum skin. The head is held under tension which can be adjusted to produce different tones. The body has a hoop and screw mechanism that secures the vellum into a frame to keep it stable.

These are usually made from steel or brass and are designed to keep the banjo head tight using hooks and adjustable screws. Being adjustable means that the head’s tension can be altered to achieve the tone and response you prefer.

The banjo head produces the music you hear after strumming. The head is basically a membrane that vibrates to create soundwaves, which are then amplified and projected towards either the musician or the audience depending on the model being played. There are several different types of heads out there, all of which have different sounds depending on their thickness, material, and coating.

Banjo heads are can be slackened or tightened to vary the instrument’s sound using the tension hoop we talked about above. Tighter heads make for a sharper, bright sound, while loose ones have greater depth.

These are the main types you need to know about:

By far the most popular material used in banjo heads is mylar plastic. This can be coated in different finishes to give the instrument a different overall tone. Clear mylar is uncoated and gives out a bright sound with good sustain, these heads can sound a little thin though, so avoid these if you need something with plenty of beef.

Some mylar heads come with either a frosted top and a smooth underside or vice versa. A smooth top and coated bottom head design is quieter and more bassy sounding and doesn’t scratch your hands up as much when you strum. For this reason, they’re a fantastic option for players that want to strum hard with a pick.

Banjo heads with coated tops and a smooth underside are great options for 5-string bluegrass players, as the top coating gives the instrument a crisper tone with plenty of note separation. These heads can feel a bit rough and grainy on your fingers though so you may have to sand the coating down a little to get it feeling comfortable.

Then you have fiberskyn banjo heads, which have a coating of tiny fibers sprayed onto the top of the head. The extra layer creates a warm, rich tone that’s slightly muted compared to plastic versions, which is great if you’re looking to play old-time clawhammer style. The fiber coating also means that these heads resemble traditional animal skin models, for an authentic banjo look.

If you’re trying to sound as authentic as possible, you’ll be happy to know that it is possible to buy a traditional animal skin head. These are usually made from calf or goat skin vellum and produce the warmest, full-bodied sound of all the models we’ve mentioned so far; the only downside is that they tend to warp in different environments. For example, on a hot day, the skin will tighten, then on a cold day it’ll loosen, this is bad news if you like your action to stay consistent or don’t want to be continually adjusting your instrument.

Finally, there’re even heads that are made to recreate a Renaissance period vibe! These are honey-colored, with an opaque top. The overall sound renaissance heads produce is clear and bright, but with increased depth and sustain, making them great all-rounders for playing most banjo music.

Tone rings give your banjo a touch of extra voicing, which is a critical part of their overall sound. They come in different materials including bell bronze, grenadillo wood, and steel. Bronze is loud and powerful, whereas grenadillo wood is warm and well-balanced. Steel, on the other hand, produces a bright and clear chime.

The rim of a banjo is basically a base for the components of the pot assembly we mentioned above. They are usually made from a circle of type of 3-ply wood, such as maple, to amplify the vibration produced by the tone ring. This extra vibration works to give the instrument a full, rich tone.

These are often long thin pieces of steel that stabilize the rim.

The flange is designed to separate all the components of the banjo body so that they ring out strongly as one unit. It can also attach a resonator to the pot via thumbscrews or clips built into pop-on resonators.

We previously mentioned the components that make up the bulk of a banjo’s body, but we didn’t explain how are they arranged. So, to go into a little more detail, the rim and head are joined together by the tension hoop, which hooks onto the banjo head and can be adjusted by tightening or loosening the screws. Then there’s the tailpiece and the bridge. The tailpiece sits at the bottom of the banjo’s body and is used to anchor the strings into place. The strings at this end then run across the bridge, which can be adjusted in terms of height to alter the instrument’s action.

It’s worth mentioning that resonator banjos have a couple of extra features, including a flange and resonator back. The flange basically supports the resonator and adds weight to the instrument. Whereas the resonator itself is a wooden bowl attached to the back of the banjo which adds depth and volume to the sound the instrument produces. Additionally, some banjos feature a tone ring built into the body, between the rim and the head. These are usually made from brass and are used to give the instrument different tones, depending on your preference.

We hope you’ve enjoyed this article and you feel you’ve learned something new about banjo anatomy.

Now it’s just a case of learning how to play one. On that note, make sure you check out our guide to playing the banjo which gives you the basic steps involved in learning to play this awesome instrument.