The Benefits of Music Education for Children 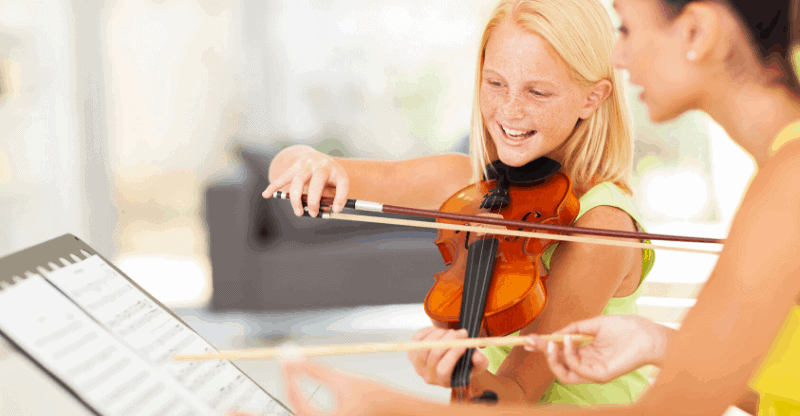 When Greek philosopher Plato said that music gives “wings to the mind”, he may have had a point.

There is a growing body of evidence suggesting that music education can have a transformative effect on youngsters, from improving communication, attention, and memory skills to making children more emotional and behaviorally mature.

It might even, as written about in The Atlantic, close the academic gap between rich and poor students.

We’ve already written about the health benefits of playing piano (for any age), but in this article, we look at seven ways that music education specifically helps child development.

In a fascinating study called The Harmony Project, neurobiologist Dr. Kraus ran a series of experiments with 2nd and 3rd graders. She found conclusive evidence that music enhances sound processing and cognitive skills (memory and attention).

According to The Children’s Music Workshop, music helps children with the development of language in general as it helps to develop the left side of the brain, the side known for processing language. It can even wire the brain’s circuits in specific ways, they claim.

Mary Luehrisen, executive director of The National Association of Music Merchants (NAMM) and an advocate dedicated to music education, also states that growing up in a musically rich environment is often advantageous for children’s language development.

Language competence “is the root of social competence” so it helps kids socially, according to Yale professor of child psychiatry, Dr. Kyle Pruett. He claims “musical experience strengthens the capacity to be verbally competent”.

Does studying an instrument raise a child’s intelligence? According to research, it looks that way.

E. Glenn Schellenberg at The University of Toronto at Mississauga conducted an interesting experiment published in a 2004 issue of Psychological Science. Over the course of nine months, three separate groups of twelve six-year-olds were given:

Before the experiment was begun, the children’s IQs were tested before and after.

The results? The children who were given music lessons tested on average three IQ points higher than the other groups.

According to research carried out by Harvard University’s Center on the Developing Child, the experiences children have early in life, and the environments in which they have them, strongly affect whether they grow up to be healthy, productive members of society.

Those experiences in early childhood impact the development of an infant’s brain architecture.

During early childhood, the brain is extremely malleable and adaptable to its environment – a term known as ‘neuroplasticity’ – due to there being an overproduction of neurons and synapses.

It’s crucial these neurons and synapses are strengthened. If they’re not exercised, they weaken and are eventually lost (a condition known as ‘pruning’).

How are they strengthened? Neurological development is stimulated through ‘purposeful touch’ and is particularly effective when accompanied by responsive interactions, ideally face-to-face.

It turns out that the tactile and multi-sensory experience of playing an instrument is an effective way to strengthen these synapses.

You don’t need to spend a fortune on an instrument either. There are many drum types available that will do the trick (kids love to hit things!) or even a homemade musical instrument.

Brain scans also back up the evidence. A fascinating study by The Dana Foundation found changes in the brain images of children who had 15 months of weekly music lessons had enhanced sound discrimination and better developed fine motor skills.

The final word goes to Dr. Eric Rasmussen, a specialist in music education from The Johns Hopkins University who has devised a specialized music curriculum that teaches children aged two months to nine years. “You have to be using more of your brain when you’re playing an instrument”, he says.

Who would think that learning an instrument would help with architecture, engineering, or math?

Well, it does! It turns out that music education develops a ‘spatial intelligence’ that helps children visualize how various elements should go together.

This kind of intelligence is critical to the sort of thinking needed for solving advanced mathematics problems to relatively simple endeavors that children struggle with, such as managing to pack a book-bag with everything that will be needed for the day.

“We have some pretty good data that music instruction does reliably improve spatial-temporal skills in children over time,” says Kyle Pruett, professor of child psychiatry at Yale School of Medicine.

According to Christopher Johnson, the professor of music education who undertook the study, “there were significant differences between good programs and bad in both reading and math scores.”

Mary Luehrisen from NAMM points out that schools with high-quality music and art teachers create an exciting environment where creative, smart, and joyful things can happen, which rubs off on everyone, even people who aren’t naturally engaged “have a tendency to go up and do better.”

The first time I saw my 8-year-old daughter successfully play every note of ‘Mary Had a Little Lamb’ on the guitar, as well as feeling a massive sense of pride, I saw a twinkle in her eye and a feeling of pride radiating through her.

In our world of consumerism and short attention spans, there is something very special about a child learning to persevere with something. Let’s face it, compared to the average app played on a smartphone, an instrument appears to be incredibly hard.

But if they stick with it they learn a lesson that will stay with them for life: nothing good comes easy. The more difficult something is at the outset, the bigger the prize at the end. They’ll get to see the fruits of their labor by the end of it.

Music education increases your child’s confidence and helps them grow their self-expression.

There are many ways to grow a child’s confidence levels. Encouraging them to problem solve and find their own solution is one of the best ways to go about it, as kids crave independence and like to feel in control.

Becoming competent at something helps to grow confidence and reaffirms in the child that they can do something on their own.

The habit of practice is also important here. Harmony Shu, a piano prodigy who started at the age of 3, says “Practice invests effort in the confident expectation that improvement will follow,”

The evidence is rather compelling, isn’t it.

What’s just as impressive is that the positive impact on the brain goes on having a lasting impact long into adulthood. Even if you or your child ends up quitting the instrument after a few years, your brain is irrevocably changed for the better.

If you want to find out more, here’s a great webinar that touches on all this from Dr. Kraus, the woman behind The Harmony Project.

Finally, here’s a great of playlist of songs about children that celebrates just how wonderful they are.