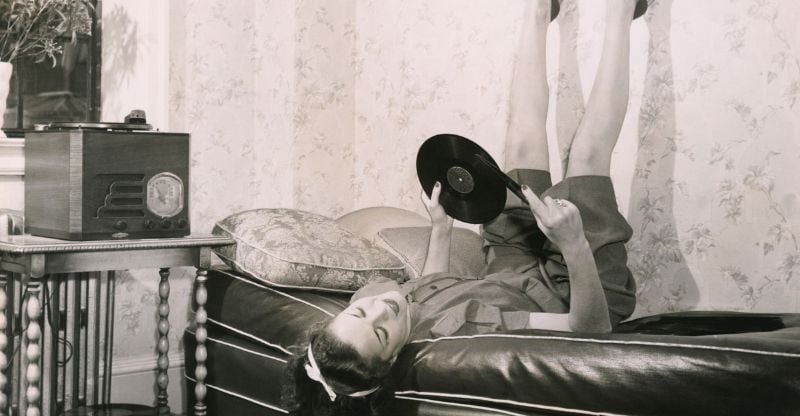 By the 1940s, recorded music was widely available to listeners, opening the door for a wide array of new artists, subgenres, and an output of new hits like never before.

Let’s get lost in a riveting musical renaissance with the best 1940s songs.

Swinging on a Star – Bing Crosby

Singer and actor Bing Crosby was hosting composer Jimmy Van Heusen for dinner one night at his home when Crosby sang an off-the-cuff line to one of his kids who didn’t want to go to school the next day. “If you don’t go to school, you might grow up to be a mule. Do you wanna do that?” Van Heusen paired up with lyricist Johnny Burke and this fun string of lines made it into ‘Swinging on a Star,’ which Crosby sang in his film Going My Way.

Related: Listen to more songs with the word stars in them.

“I’d rather have a paper doll to call my own than have a fickle-minded real live girl.” After being heartbroken over a girl who left him, ‘Dardanella’ lyricist Johnny Black wrote ‘Paper Doll’ to express his pained emotions. When The Mills Brothers recorded it, the single became a top hit for twelve weeks and sold more than 10 million copies worldwide.

Spanish for ‘frenzy,’ this tune was originally written on the percussion instrument known as the marimba. After it was made into a jazz standard by musician Leonard Whitcup, Artie Shaw’s version became a huge success. Other artists who have covered the song include Bing Crosby, Ray Charles, and Anita O’Day.

“Chestnuts roasting on an open fire. Jack Frost nipping at your nose.” This peaceful, feel-good Christmas song was first released by Nat King Cole and his band in 1946. The song ended up being a huge hit for them as listeners searched for more holiday-themed music. It was inducted in 1974 into the Grammy Hall of Fame.

Related: Bundle up and enjoy even more cold weather music.

I’ve Heard That Song Before – Harry James and His Orchestra

A widely recorded hit by artists such as Frank Sinatra, Paul Anka, and Pat Boone, Harry James and his band’s ‘I’ve Heard That Song Before’ was one of the most popular pop songs in 1942. A vintage tune with hints of early R&B stylings, Woody Allen included James’ version of the song in his film Hannah and Her Sisters in 1986.

The Gypsy – The Ink Spots

While The Ink Spots made this mystic-focused tale a hit in the US, the version recorded by Billy Reid’s orchestra was the go-to rendition in the UK. The song tells the story of a man who visits a fortune-teller to find out if his wife is being faithful. Even though the mystic assures him she is, they both know she’s lying. He continues to return to her because he’s afraid to face the truth.

Related: Sneak over to our playlist of affair songs.

This big band tune just so happened to be recorded as America entered World War II after the attack on Pearl Harbor in 1941. ‘Moonlight Cocktail’ became a top hit, and though the nostalgic nature of the track made it popular among soldiers, BBC Radio banned it in favor of numbers that would “boost troop morale” for the war.

Related: Grab a cocktail and listen to these liquor songs.

Pop music began to garner a large audience in the 1940s. It would be another ten years before the advent of rock and roll, which took over the airwaves and ousted pop as the dominating radio genre. In 1940, Tommy Dorsey, along with his band and vocalist Frank Sinatra, released the most successful version of the pop standard ‘I’ll Never Smile Again.’ It remained the number-one song on the recording industry’s first-ever Billboard chart from July to October.

Recorded in 1938, Ted Weems never saw much success with ‘Heartaches’ because right after its release, his band split up to fight in WWII. However, in 1947 a radio DJ named Kurt Webster revived the song by making it a part of his regular rotation. It gained so much attention that when Weems returned from the war, he reunited with his band to capitalize on the success of their single.

Related: Dealing with heartache? Here are some songs about a broken heart.

Riders in the Sky – Vaughn Monroe

First penned by Stan Jones, this cowboy anthem has seen many versions, including a successful release by Vaughn Monroe in the late ’40s and another version released by The Outlaws in the ’80s. The legend in the song follows riders who are doomed to chase after demonic cattle in “cowboy hell.”

Related: Ride over to our cowboy songs playlist.

Near You – Bob Lamm and Francis Craig

Spending 17 weeks at the number one spot on the charts, Bob Lamm and Francis Craig’s ‘Near You’ was voted by Billboard Magazine as their top song of 1947. The traditional pop song also became a country hit when George Jones covered it with Tammy Wynette in 1977.

“Amapola, my pretty little poppy.” Though the wistful song has been covered by greats like Doris Day and Benny Goodman, Jimmy Dorsey’s 1941 version captures the tune’s essence like no other, thanks to his dynamic orchestra. Originally a Spanish number, it was written by Joseph La Calle in 1924.

After Jimmy Dorsey recorded ‘Ballerina’ and missed the mark, publisher Redd Evans contacted Vaughn Monroe despite a previous falling out because he knew he was the right musician for the job. A heartbreaking story about a dancer who trades in love for fame written by Bob Russell and Carl Sigman, Monroe’s version quickly hit number one on the charts.

Related: Greedy for fame or money? Here are the best songs about selfishness.

I’ve Got a Girl in Kalamazoo – Glenn Miller Orchestra

A song about a man’s lover who resides in Kalamazoo, Michigan, this Glen Miller Orchestra pop standard was widely successful in 1942. Not only was the song nominated for an Academy Award, but Billboard Magazine said it “was the year’s best-selling recording in the United States.”

Related: Check out these songs with states in the lyrics.

Featured in the film Three Cheers for the Boys, The Andrews Sisters made this mid-1940s hit their signature song. ‘Shoo-Shoo Baby’ sports a fun, jazzy-pop instrumental theme with a boisterous horn section.

Cool Water – Sons of the Pioneers

Grammy award-winning hit ‘Cool Water’ finds a parched cowboy in the desert with his mule trying to outsmart a powerful mirage. Country western songwriter Bob Nolan, also a member of Sons of the Pioneers, wrote the tune in 1936 before releasing it with his group in 1941. Both Vaughn Monroe and, later on, Johnny Cash would record successful covers of this folksy fable.

Poet Robert Burns restored this old Scottish standard. Starting in the 1930s, Guy Lombardo made it a tradition to sing ‘Auld Lang Syne’ when the clock struck midnight on January 1st every year. He released his popular version in 1947 but continued the tradition he started with public performances of the song well into the next decade.

Related: Start off the new year with these songs about starting a new chapter in life.

Songwriter Jimmie Davis was serving in the military when he wrote the catchy tune ‘Lover Man.’ When he got together with fellow writers Roger Ramirez and James Sherman to finish it, they all had Billie Holiday in mind as their preferred vocalist. She released the pop/R&B track in 1945.

Themed songs became a popular trend in the 1940s, with audiences wanting more patriotic tunes and original holiday music. Lyricist Irving Berlin contributed to both categories, and his ‘White Christmas’ tune was a Bing Crosby favorite. He sang it in his 1942 film Holiday Inn where he portrays a businessman stuck in California, unable to get home to New York for the holidays.

Related: This song features on our playlist of whistling music.

Latin musician Xavier Cugat had his biggest hit with his 1942 release of ‘Brazil.’ During the 1940s, he acted as an orchestral leader at New York’s premier hotel, the Waldorf Astoria. He was instrumental in helping Spanish music gain popularity in the mid-1900s.

Related: Take a trip with these songs about countries around the world.

Not only did WWII significantly influence artists during the 1940s, but a two-year musician’s strike starting in 1942 made it temporarily impossible to record. Songwriters Les Brown and Ben Homer were finally able to record ‘Sentimental Journey’ in 1944 and hired famed vocalist Doris Day to tackle the lyrics.

1930s pop song ‘That’s My Desire’ saw a revival in the mid-1940s when artists Frankie Laine and Sammy Kaye both released their own versions of the track. Though Kaye’s version charted a bit higher, Laine’s rendition would become one of his signature songs, with fans still playing his release years later.

Singing cowboy and actor, Dick Thomas sang ‘Jingle, Jangle, Jingle’ in the movie Forest Rangers. Originally written by Joseph J. Lilley and Frank Loesser in 1942, the song saw the most success with Kay Kyser’s version. Since its first release, it has been recognized as one of the best western songs of all time by the Western Writers of America.

You Are My Sunshine – Jimmie Davis

Aspiring diplomats take note of this campaign strategy. When Jimmie Davis first recorded ‘You Are My Sunshine’ in 1940, he used it as part of his marketing efforts while running for office. The gimmick worked, with the song helping to get him elected several times. During his campaign stops, he’d sing the song with an accompanying guitarist while riding his horse, appropriately named Sunshine.

Related: Find this song on our songs about sunshine playlist.

You Always Hurt the One You Love – Mills Brothers

Jazz-pop vocal group, the Mills Brothers, topped the charts with their song ‘You Always Hurt the One You Love.’ A popular number in the 1940s, many artists, like Fats Domino and Brenda Lee, released covers of their own, resulting in the original style of the tune getting lost in the fray. Despite this transformation, the Mills Brothers weren’t bothered by it. The infamous “Swing and Sway” Sammy Kaye released a very successful rendition in the ’40s, as well.

Related: See our playlist of songs about loving someone who hurt you.

Don’t Fence Me In – The Andrews Sisters and Bing Crosby

An early cowboy song written by revered country western songwriter Cole Porter, the tune follows the mythical horseman Wildcat Kelly who can’t be tied down by the law or by women. The Andrew Sisters, in partnership with Bing Crosby, released a well-received version in 1944. Singing cowboy star Gene Autry would also add to the recording tradition of ‘Don’t Fence Me in’ in the mid-1900s.

Cruising Down the River – Blue Barron and His Orchestra

Two women entered their lyrics and music to ‘Cruising Down the River’ in a songwriting competition in the UK in the early 1900s. Not only did they win the competition, but their entry became one of the most popular songs of the 1940s. It gained grassroots momentum by becoming a dinner party favorite in the ’30s. Once Blue Barron released his own big band recording, Billboard took notice, and it became a bestseller.

Related: Cruise down to our playlist of songs with rivers in the title.

Till the End of Time – Perry Como

“Till the end of time, long as roses bloom in May. My love for you will grow deeper with every passing day.” This moving, romantic ballad left women swooning after its debut in 1945. Known as “the singing barber,” Perry Como scored his first million-dollar seller with this hit and the “best-selling jazz record of 1945.”

Related: Prep your playlist with these songs for the end of the world.

“Don’t mess with Mr. In-between.” Johnny Mercer and Harold Arlen wrote this timeless traditional pop standard. The songwriters left it up to Bing Crosby to deliver their message on happiness when the movie star merrily sang it in the comedic film Here Come the Waves.