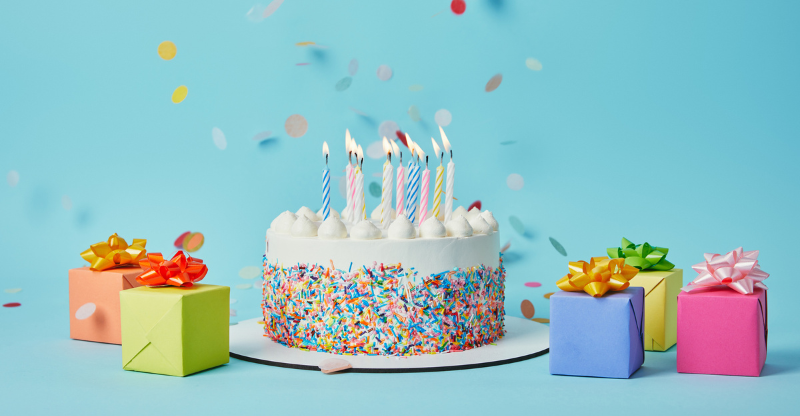 There’s just something exciting about birthdays! It’s always nice to celebrate birthdays with loved ones and reflect on all that has been achieved in a year.

If you are looking for new songs for birthdays or want to see how artists feel about the topic, this playlist has you covered! Here are the best birthday songs to enjoy while you eat some cake and ice cream.

This birthday song also celebrates unity and peace in the world. Stevie Wonder honors everyone in the past and present who has worked toward creating a better and more understanding world for the good of all.

Related: Feel the love with these songs about togetherness.

The Beatles celebrate birthdays and dancing at birthday parties in this fun-filled classic. The lyrics are simple for a reason many people can relate to—the band didn’t want to miss a movie and decided to keep the track simple! This was one of the last written collaborations between John Lennon and Paul McCartney.

Katy Perry vows to thrill a romantic interest on his birthday in this track, which is full of innuendo as she lets him know her plans for his party. Mariah Carey’s vocal style inspired Perry for this piece, where she sings higher than is typical for her songs.

The protagonist here wishes a person who is a cruel liar “an unhappy birthday.” The song goes so far as to say it would be okay if this individual weren’t alive anymore. This track differs from the upbeat vibes of most other birthday-related songs. It also highlights how badly a loss can hurt one’s feelings and psyche.

Rihanna uses birthday cake metaphors to allude to acts of passion in this piece. The 2011 version is quite short at 78 seconds. A full-length version was released in 2012 and featured Chris Brown, marking the first time Rihanna and Brown worked together since their breakup.

Loretta Lynn wishes a soon-to-be-former love interest, “Happy Birthday, Merry Christmas, and Happy New Year,” as he has been unfaithful, and she is getting away from him. She doesn’t think he’ll believe she’s going to leave him, but she plans to prove him wrong. The song was actually released around Christmas for the holiday music season.

Related: Here are the best songs about saying goodbye.

The narrator here says this is a “birthday song” near its end, but the lyrics aren’t really about a birthday. Instead, they are about a man falling in love and being surprised at how wonderful it is to have a special someone where both romance and passion are concerned.

Related: You’ll fall for our falling in love songs list.

Here’s a girl-power anthem that was actually released around Selena Gomez’s birthday. The lyrics are somewhat full of innuendo as Gomez says that her desire to party and find passion every night can be chalked up to the fact that she treats every day like her birthday. The trap, Hip-Hop, and synthesizer beats help to emphasize the lyrics.

This track seems to be about a young man who’s turning 20. This protagonist and his girlfriend have parted ways romantically. He hopes someone cares for her and wants her to know he will always be there if she needs him. He doesn’t seem to be handling the situation well.

Related: Check out the best songs about breakups.

St. Vincent continues her saga of Johnny with this track; she asked this love interest to marry her in the earlier track, ‘Marry Me,’ which was also the title of her first album. Here, Johnny is struggling with addiction and lives on the street. St. Vincent wishes him a happy birthday, but he feels she has left him suffering.

This is Marilyn Monroe’s iconic rendition of the traditional ‘Happy Birthday’ song. Monroe added “Mr. President” to the lyrics to celebrate U.S. President John F. Kennedy’s 45th birthday, which doubled as a fundraiser event for the Democratic Party. The song also included modified lyrics for ‘Thanks For The Memory.’ This event was one of Monroe’s last public appearances.

This song helped to celebrate the birth of John Legend’s daughter, Luna. It views the miracle of childbirth through the loving eyes of a proud father. Legend promises to be there for Luna, even if he can’t fix all the heartbreaks she will experience.

Related: Having a baby? Listen to these baby songs.

Sunday (The Day Before My Birthday) – Moby

Moby features samples from Sylvia Robinson’s ‘Sunday’ here. The song reflects how different the day before can be from the current day. The protagonist seems to have faced a significant loss right before their birthday. This was the sixth single from Moby’s sixth album.

Neil Sedaka sings as a protagonist who has watched a lifelong friend grow into a sixteen-year-old. He views her as a love interest now that she’s older and acts more like a “lady.” The song sounds similar to ‘One Fine Day’ by the Chiffons and Bobby Vee’s ‘Take Good Care of My Baby.’

Related: Celebrate your youth with the best teen songs.

The young male protagonist is helping his love interest celebrate her 16th birthday. He hopes she loves him as much as he loves her. The track charted on the Billboard R&B Chart and Hot 100 Chart after its release.

Happy Birthday to You – New Kids On The Block

This song presents a group of narrators who all plan to celebrate someone’s birthday joyfully. The track reminds listeners that it’s okay to let loose and have fun—and that you don’t always have to act your age.

Related: Improve your day with the best songs about having a good time.

Madonna is happy it’s her birthday in this song—mainly because she knows her romantic partner is going to thrill her throughout the day in a passionate way. Martin Solveig—known for the popular dance-fueled song ‘Hello’ with Dragonette—co-produced the track with Madonna.

The female protagonist should be happy, as today is her love interest’s birthday. However, she is spending the day reflecting on the loss of this man instead; he has a new romantic partner. Band member Margo Sylvia’s breakup inspired the lyrics, which Sylvia and Gilbert Lopez wrote.

Related: You won’t want to miss our missing someone songs playlist.

50 Cent tells a woman they can party like it’s her birthday in the club if she’s up to it. He makes it clear that he’s only looking to dance and have a good time and doesn’t want to start anything serious with her. The rapper namedrops five of his colleagues in the lyrics.

Related: Enhance your party with these fun dance songs.

This song’s narrator tells her man that they can celebrate his birthday any way he wants to, even if he wants to relax and have a simple celebration. She reminds him that he deserves to celebrate his special day. She also doesn’t want him to worry or work today.

Carly Simon has a sarcastic air in this song, which is more about getting older and the worries of life than about the briefly mentioned birthdays in particular. She sings of modern conveniences and annoyances and how they keep people from connecting with and loving one another.

Related: Grow old with these timeless songs about getting older.

Trip Around the Sun – Jimmy Buffet And Martina McBride

Here’s a track that views birthdays as events to reflect on life’s challenges and changes. It encourages listeners to celebrate the struggles they have overcome on their birthdays and not to take the unpredictability of life too seriously. The duet also highlights the regrets we often feel as time passes, and we wonder if we made the right choices in life.

Related: Ignore the clock and listen to this playlist of songs about time.

In this piece, Conway Twitty tells a love interest that he hopes to take some things from her rather than give her a birthday present this year. The meaning is that he wants to take her worries and lack of confidence away and make her believe in him and his love, even when she’s away from him.

This one’s about doing what you want and being frivolous and carefree on your birthday. The protagonist will party and spend too much money because today is his day. The tune is inspired by the sound of Bollywood hits and was based on Will.I.Am’s own feelings about birthdays.

Related: Spend some time with our money songs list.

Weird Al Yankovic delivers his signature humor in this backhanded birthday song. He sings about all the problems of the world and sarcastically wishes his friend a happy birthday anyway. The song takes pessimism to outrageously funny new heights.

Dethklok sings of the darkness of life in this track—the darkness being mortality and the suffering and injustice in the world. It reimagines a birthday as a “Deth-day” in a pessimistic reimagining of what birthdays are really all about.

Related: Head over to the best social justice songs.