19 Best Bluegrass Songs You Have to Hear 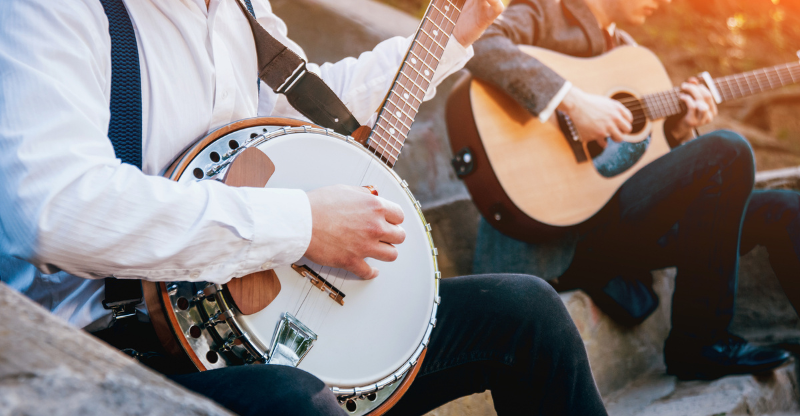 Though the bluegrass music genre was created in the 1930s by musicians wanting to highlight the struggles of rural southern communities, it didn’t gain ground until post-World War II. Many sections of society could relate to the lyrics and enjoyed the bluegrass approach to acoustic instrumentation.

The raw, often fast-paced genre is named after musician Bill Monroe and his band, The Bluegrass Boys.

Check out our list below for a riveting tour of some of the best bluegrass songs.

An all-instrumental bluegrass tune, musician Earl Scruggs wrote ‘Foggy Mountain Breakdown’ in 1949. The “breakdown” in the song’s title refers to the tune’s composition, which features several instrumental “breaks,” or solos. In Scruggs’ recording, he sports a five-string banjo. The dynamic song proved to be perfect for the chase scene in the 1967 film Bonnie & Clyde.

Initially written by Albert Brumley, ‘I’ll Fly Away’ has been a comforting tune for listeners for over 90 years. Known as a “country hymn,” the bluegrass-tinged song speaks of death in an empowering, joyous manner. It’s referred to as “the most recorded gospel song” and has been included in pivotal scenes in movies such as O’ Brother, Where Art Thou? and Greater.

Related: Listen to more songs from O Brother, Where Art Thou?

Written by songwriter Ervin T. Rouse in the 1930s, ‘Orange Blossom Special’ is a go-to fiddle song about a passenger train. The train ran the rails from 1925 to 1953 and transported passengers from New York City to Miami. Many artists have covered this bluegrass staple, including Chubby Wise, Johnny Cash, and Charlie Daniels.

Related: Head over to our songs about trains list.

“Rocky Top, you’ll always be home sweet home to me.” Tennessee Volunteers fans sing this tune at every home game during football season. Though the song’s location is technically fictional, “Rocky Top” is known as one of the peaks in the Great Smokey Mountains near Gatlinburg, Tennessee (the actual town that inspired the hit song). The tune follows a man who moved to the city and is reminiscing about his country home.

“Oh love, you fickle thing. Such pretty words and golden rings.” Country trio The Chicks are heavily influenced by the bluegrass genre. Many of their tunes feature their signature sound of flawless harmonies, fiddle, and banjo. In ‘Tortured Tangled Hearts,’ the musicians tell the classic tale of love-gone-wrong. This lesser-known Chicks pick is full of their tried-and-true sass and attitude.

An early bluegrass piece originally composed by Arthur Smith in 1954, the all-instrumental piece is meant to showcase one of the genre’s most prized sounds, the frolicking, rolling banjo. The tune reached international stardom in 1973 when it was featured in the movie Deliverance. Eric Weissberg played the banjo part, and Steve Mandell played the acoustic guitar part in the film.

I Am a Man of Constant Sorrow – Stanley Brothers

A blind fiddler hailing from the bluegrass state itself, Dick Burnett, wrote ‘I Am a Man of Constant Sorrow’ around 1913. Popular artists like The Stanley Brothers and Bob Dylan released well-received covers of the tune, originally titled ‘Farewell Song’ by Burnett. The song entered modern, mainstream consumer circles when it was featured in the hit film O’ Brother, Where Art Thou? and recorded by the movie’s fictional band, the Soggy Bottom Boys.

A 1927 bluegrass classic, Jim & Jesse and The Virginia Boys released a cover version of this track in 1963. The popular hit is a go-to song for both country and bluegrass artists. Artists ranging from Bill Monroe and Earl Scruggs to Chet Atkins have recorded the oldie but goodie. ‘Nine Pound Hammer’ is a song geared towards instrumental prowess, so many banjo players love trying their hand at it.

Blue Moon of Kentucky – Bill Monroe and The Bluegrass Boys

In an original written by Bill Monroe, the father of bluegrass, the glittery, high-pitched sound of a mandolin can be heard throughout the track. The bluegrass genre even derived its name partly from Bill Monroe, whose backing band was The Bluegrass Boys. Kentucky, nicknamed the bluegrass state, recognizes this tune as its official state song.

Related: You’ll be howling with these best songs about a full moon.

One of folk/bluegrass artists, Larry Sparks’ most popular recordings, ‘Tennessee 1949,’ finds Sparks reminiscing about his childhood home and wondering if the small town he grew up in still looks the same. Sparks’ career spans decades, and he’s won several Bluegrass Association Awards, including Best Male Vocalist of the Year.

Related: Thinking about home? Here are some songs about home and family.

A Hank Williams classic written in the late 1940s, this “country gospel standard” has endured the test of time with many different popular cover versions. Williams originally wrote the tune after a concert while driving his mom home to Alabama. For the signature country album Will the Circle Be Unbroken, which features collaborations by the country genre’s biggest names, The Nitty Gritty Dirt Band recorded the song with Roy Acuff (he was an instrumental figure early on in Williams’ career).

“No, nothing lasts forever.” Written by Nashville songwriters James Ellis and Steve Dukes, the reflective tune is about the reality of constant change. The “Kitty Hawk” reference in the song pays homage to where the music group Balsam Range is from, North Carolina, where the Wright Brothers took their famous “first flight” with their invention, the airplane.

Related: If things are changing, listen to the best songs about life changing.

First appearing in the late 1920s, the origins of the bluegrass standard ‘Mountain Dew’ came straight out of the Appalachian mountains. With lyrics focusing on a popular Appalachian product, homemade moonshine, the country/gospel artist Grandpa Jones covered the tune in the 1940s. Grandpa Jones made a name for himself as a gifted banjo player and was eventually inducted into the Country Music Hall of Fame.

Related: Climb over to our list of songs about mountains and valleys.

I Found a Hiding Place – Carl Story and His Ramblin Mountaineers

The bluegrass genre often contains faith elements within its songs’ stories. With Carl Story’s ‘I Found a Hiding Place,’ he sings about redemption and comfort heaven offers despite the long, bumpy road he has to travel. Story and his band, His Ramblin’ Mountaineers, often included gospel stylings in their music. Story’s bluegrass hymns inspired people to call him the “Father of Bluegrass Gospel Music.”

A widely regarded bluegrass band during the ’80s, The Johnson Mountain Boys included the classic tune ‘Walls of Time’ on their album by the same name. Before the bluegrass band enjoyed success with the tune, songwriters Bill Monroe and James Monroe wrote it in 1972. Other greats in the bluegrass genre, like Emmylou Harris and Ricky Skaggs, also recorded their own renditions.

Related: Hurry over to our list of songs about time passing too fast!

“The scaffold is high and eternity near.” Penned in 1959 by country songwriters Danny Dill and Marijohn Wilkin, singer Lefty Frizell originally made this folk-tinged ballad about a falsely accused man a hit. The tune is told in the first person, with the protagonist recounting his thoughts and story as he is wrongly convicted of murder and executed. John Duffey released his own rendition in 2000.

First recorded by John Hammond in 1925, bluegrass artist Wade Mainer released his own version of the traditional song in 1952. A love song in nature, ‘Little Birdie’ is told from the perspective of a pining lover who compares his one and only to a bird and hopes she never flies away from him. Other popular covers of the song include Pete Seeger and The Stanley Brothers.

Get Back to the Country – Neil Young

One of folk artist Neil Young’s lesser-known tunes, ‘Get Back to the Country,’ appears on his ’85 album Old Ways. The upbeat bluegrass-inspired song finds Young wistfully thinking about all the reasons he needs to embrace rural ways of living. He performed the track at Live Aid 2008 and has also performed the tune alongside country music outlaw Waylon Jennings.

Formerly known as Mandolin Orange, bluegrass duo Watchhouse tackles environmental issues with their tune ‘Echo.’ Appearing on their 2016 album Blindfaller, they remind people of the importance of protecting natural resources as communities across the world continue to expand. Watchhouse songwriter Andrew Marlin gained inspiration to write the tune after a chat with fellow songwriter Josh Moore.

Related: This song features on our playlist of classic folk songs.