24 Best Dance Songs to Get You Busting Some Moves 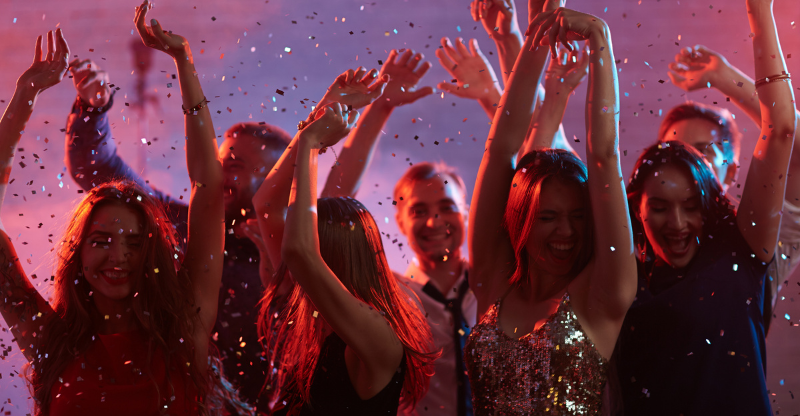 Dancing is a fantastic way to have fun and release pent-up energy – and you don’t even have to be good at it!

Just wiggling your body around will qualify as dancing here. These dance songs have a great beat to get you started and messages that remind us how important (and fun) letting loose can be.

Whether you’re prepping for a night out or having a celebratory night in, this playlist of the best dance songs that’ll get you moving! From pop music to electronic music, there’s sure to be something that will suit your next dance party.

This inescapable club tune has the perfect beat drops and melodies of timeless dance music. This song is an anthem for having a great night, saying, “everybody just have a good time.” Forget about everything, and use this moment to just dance around and have fun. It’s easy to lose yourself in the beat of this song and let it tell you what to do. “Get up, get down, put your hands up to the sound.”

Related: Find this song on our list of party songs.

The stripped-back beat and hypnotizing melodies of ‘Work’ provide a song you can just really feel yourself to. Rihanna and Drake duet about a rocky relationship, trying to decide if it’s worth it to put in the work to make it a success. The repetitive lyrics make for a catchy song, which led to its success at the top of the charts.

Related: Here are some more songs about hard times.

You are almost guaranteed to hear this song at any club on a night out. It’s cathartic, it’s singable, and its driving beat makes dancing iirresistible The song is about having an absolute meltdown after a breakup—in a good way. It’s a release of all the pain and chaos this relationship caused, and it feels good to scream, “I don’t care!”

Related: Feel free with our songs about freedom playlist.

This iconic R&B song is groovy and captivating and rightfully took home a Grammy Award for Best R&B Performance in 1998. The steady beat makes for relaxed dancing and good times. The track talks about being infatuated with someone else’s dancing and movements, singing, “I like the way you work it, no diggity.” “No diggity” is a way to say “for sure” and takes on suggestive undertones here.

‘On the Floor’ features a chorus with the line “dance the night away, live your life and stay young on the floor,” to summarize its message: let go and live free. It’s the perfect pop song, with catchy electronic elements and verses from Pitbull. You can get lost in the music and experience the night as it is—an opportunity to have fun and let go of self-consciousness.

‘SexyBack’ is a flawless dance song for many reasons. Its risqué subject matter, seductive refrains, and interactive call-and-response sections invite so much fun. It brings out the flirtatiousness in everyone, creating laughter between friends and connection between partners. This song shows that Justin Timberlake sure knows how to “bring sexy back.”

Avicii was probably one of the most well-known DJs of the 2010s, and his tracks are still pretty popular club tunes. ‘Levels’ is lyrically sparse, but the verses are universally recognizable. That line, “oh, oh, sometimes, I get a good feeling,” is impossible not to scream along to, and the freeing beat is an awesome one to dance out all of your tension.

Sean Paul instructs the party people in the club to “get busy” in this classic dance hit. According to Paul, there’s no rest for the club-goers—”let’s get it on ’til the early morn.” The lively beat creates the excitement of a night out. You don’t know what’s going to happen, but you know you’re there for a good time! And even if it takes all night, you’re going to get it.

In this song about Cuba’s capital, Camila Cabello connects with her Cuban heritage, saying that no guy can match up to her love for her home—”half of my heart is in Havana.” A steady beat, alluring horns, and catchy “na na nas” make this a great dance song.

Related: Head over to our list of the best songs about places.

‘Uptown Funk’ was inescapable in late 2014 and the beginning of 2015. It was on every radio station, every pop playlist, and playing in every club. Bruno Mars’ satisfying vocals, the horn section, and the immensely catchy verses leave no mystery as to why the song was so successful. This song is guaranteed to put you in a good mood!

Related: Listen to more songs to make you dance.

‘Go’ makes it obvious how important instrumentals are in dance tracks (and also how lyrics can be not quite as important). Even though this song has practically no lyrics, it remains captivating and danceable the whole time. It has a steady techno beat but adds elements like piano and synth to keep you on your toes.

Despite the upbeat disco feel, and the snappy melodies of this song, the backstory behind it is a bit dark. Michael Jackson sings about a woman who was dangerously obsessed with him, even claiming he was the father of her son. Jackson tries to face this strange situation with ‘Billie Jean,’ clarifying that “Billie Jean is not my lover, she’s just a girl who claims that I am the one.”

Get Me Bodied – Beyoncé

With a bouncy beat and continuous “heys” in the background, ‘Get Me Bodied’ is a super energizing song. Beyoncé sings about letting go of her worries and inhibitions. She wants to dance and spend the night with someone and is not planning to hold back because “a little sweat ain’t never hurt nobody.”

‘Push It’ is a classic hip hop song of the 80s, and its sensual vibe and recognizable riffs have helped its popularity stand the test of time. It’s a lyrically simplistic song about getting intimate with someone and will have you confidently anticipate the event: “this dance ain’t for everybody, only the sexy people.”

Related: This song features on our playlist of workout songs.

‘We Found Love’ has a great instrumental section after an even better buildup and seems to describe the meeting of two strangers on the dance floor. It feels like that movie moment where two people lock eyes and start to make their way toward each other. “As your shadow crosses mine,” they discover that their anticipation over touching each other is “what it takes to come alive.”

Related: You’ll fall for our songs about falling in love playlist.

‘Let Me Clear My Throat’ is a brilliant dance song due to its pulsing beat and riffing saxophone, but many people probably recognize it from sports games. “Jump” is chanted many times at the beginning of the song, and this section is used during breaks in gameplay to get fans riled up, and it is very effective!

Groove is in the Heart – Deee-Lite

Sometimes we feel hesitant to dance because we feel like we’re not “good” at it. But dancing to have fun is much different from dancing with talent—you don’t have to look good! And to hold yourself back is to betray yourself because “groove is in the heart.” You can practice getting comfortable dancing to this lively song’s funky sounds.

Got to Give It Up – Marvin Gaye

Marvin Gaye works to let go of his party anxiety in this jam. The background sounds of people chattering make it feel like we’re actually hearing his inner monologue while he’s at a party. He says parties used to make him nervous, but eventually, his “body yearned to be free,” and he couldn’t hold back anymore. He just had to dance!

Exhaustion can kick in at the end of a long night out, but you don’t want the fun to end! This song is a prime example of French house music that will surely reinvigorate you, pushing you through your fatigue to “celebrate and dance so free” at least “one more time.” Autotuned and distorted vocals add a really cool effect to the song and are sure to get you feeling free.

Related: Hear a cover of this song on our playlist of Trolls songs.

Usher sings about being in the club with his friends and spotting a girl he felt he needed to talk to. The aggressive and excited “yeahs” repeated throughout the track make this a fun song through and through. The exhilaration of spotting a stranger you’re interested in through the haze of drunkenness only grows when you realize they’re interested in you too.

Related: This one is on our list of songs in The Hangover.

It is pretty much a requirement to play this song at any event with dancing and it’s probably already on your list of party songs! The song exclaims, “everybody dance now,” leaving no room for argument. Dancing feels good, even when you get sweaty and gross. You can “let the rhythm move you” and be completely free from embarrassment.

‘Kiss’ is a soulful pop song about being infatuated with someone. Prince doesn’t have many requirements for someone to be considered desirable. He doesn’t place much importance on wealth, looks, or coolness. Prince says, “I just want your extra time and your kiss.” He just wants a good time, something we can all try to learn from!

Related: Go to our playlist of the best kissing love songs.

Ini Kamoze compares the power of his lyrical talent to murder in this reggae-pop song, saying, “I’m the lyrical gangster.” It’s an interesting metaphor but a fun one that drives home the unmatched skill that Kamoze has. It works to make you feel prideful and untouchable—an optimal mindset for dancing.

This awesome hip-hop song has an addictive beat and super fun melodies to sing along to. Rob Base raps about the pride he has for himself and his attitude towards life. He is confident in his ideas and accomplishments and says to anyone who judges him: “you don’t like it? So what? I don’t care.” It’s a great mentality for letting loose on a night out.