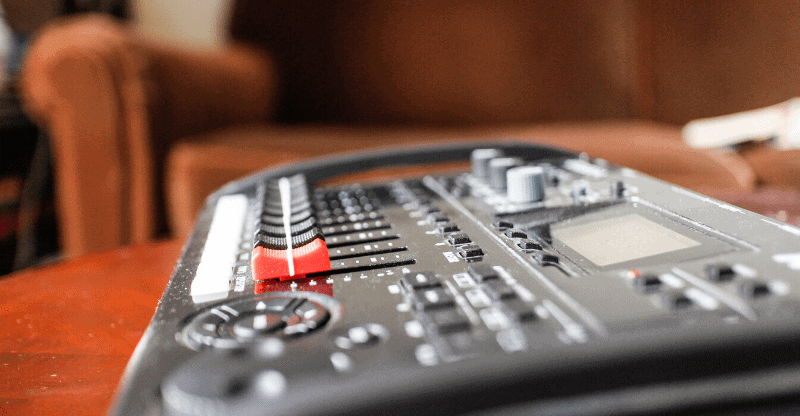 Before computers and software-based music production came along, analog multi-track recorders were how people made music.

Because they’re so portable, you can capture ideas on the fly (often the best ideas don’t happen when you’re sat in front of your computer). They’re perfect for practicing in general as well, as you can lay down a backing track and jam over the top.

In this article, we’re going to look at the best on the market. 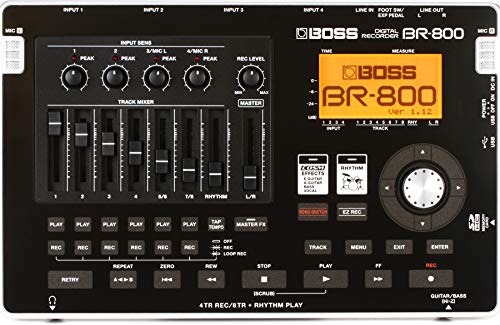 The BR-800 is the ultimate songwriter’s on-the-go multitrack recorder. It not only looks great with its sleek touch-sensor switches, but it also packs a lot of punch too.

Despite it being an advanced bit of kit, the built in ‘EZ Recording’ feature interactively guides you through the recording process.

It also functions as an audio interface and can be connected to software via a USB. The USB also provides bus power, saving you from using the six AA batteries required to power it on the go.

In addition, there’s a built-in rhythm generator and the software includes loops and backing tracks. 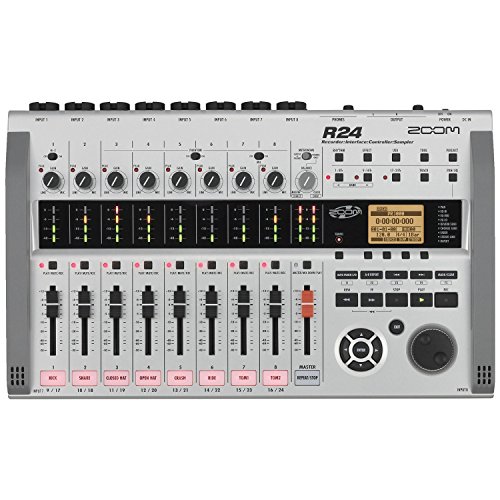 The Zoom R24 has twenty-four tracks that are able to be played back, giving it the potential to hold some much fuller sounds. This makes it a real option for bands with full drum kits.

There’s even a drum machine included, as well as an array of built-in effects including modeling amps. There are independent pan, level, and EQ controls, as well as faders to control the volume and a separate master fader. The Zoom R24 also has the Mackie emulation that makes it well suited to professional sequencing software, and it comes with a download of Cubase LE.

The R24 will suit musicians who already know their way around a mixer, and are keen to work in combination with software such as Cubase or Logic. Although it can be used without a computer, it’s designed as a part of a package.

It might not be the right product for those looking for something petite and portable (for rough demos or songwriting ideas). 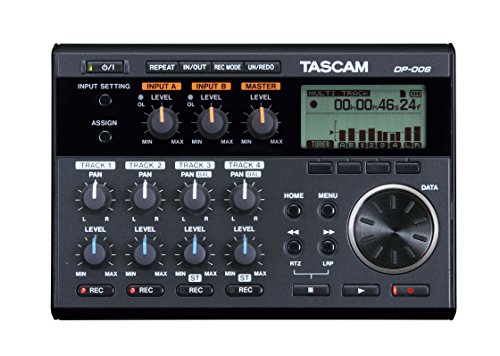 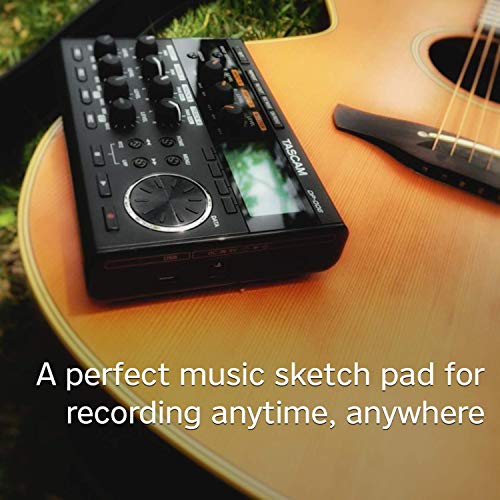 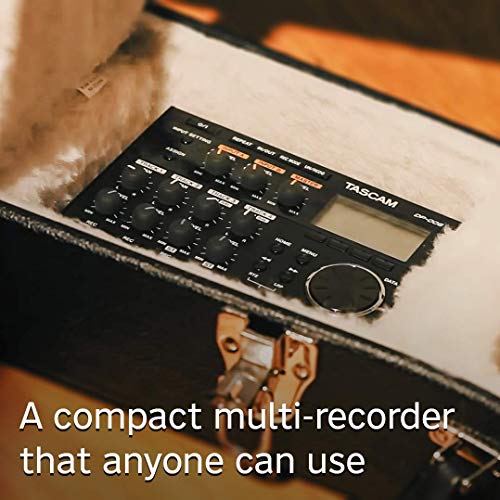 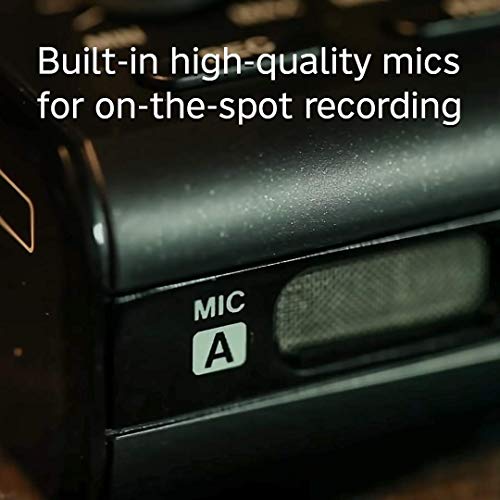 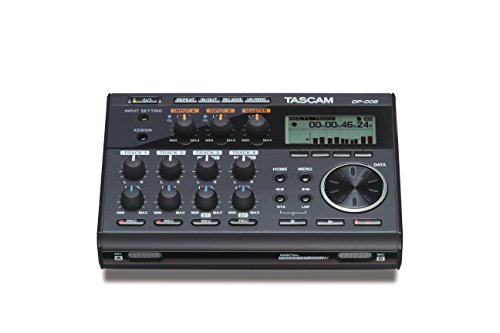 The Tascam DP-006 is a budget-friendly, 6 track recorder that has been designed for ‘on-the-spot’ recording.

It has two inputs with 1/4″ jacks that allow you to connect an external microphone, a guitar, or a line-level device like a synthesizer.

The ‘instant undo’ function lets you try new ideas without worrying about erasing your last take.

What I love about the DP-006 is it’s like a shrunken down version of a full-size multi-track recorder, with dedicated knobs per track, that make using it far more enjoyable to use (and less tedious) than having to scroll the digital menus you find on many of its competitors.

It’s super compact and light too, so great for traveling. 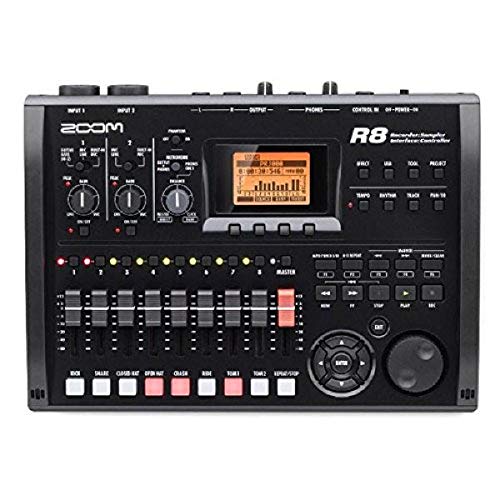 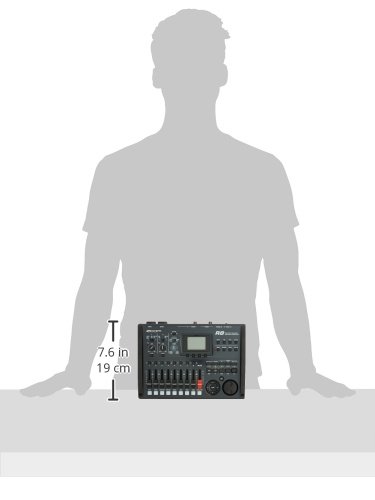 The Zoom R8 is an eight-track machine that can record two simultaneously. It has faders for each, as well as a master fader, making it easy to mix what you’ve captured. The R8 doubles up as an audio interface, although it doesn’t have bus power. It can be powered off 4 AA batteries or via the included AC adapter.

There’s a built-in drum machine, making it easy to get creative and there are also several effects included in the hardware, enabling a professional sounding outcome.

The drum machine part is easy to use with intuitive, light-up buttons and the knobs on this device are easier to navigate through than on some other devices. It does cost a little more, though.

The Zoom R8 will suit songwriters who want to get their ideas down either for reference or to export for sharing with others. The drum machine and built-in effects add to the creative options and the faders make it easy to use. It won’t be suited to musicians looking for something that can record more than 2 sounds at once. 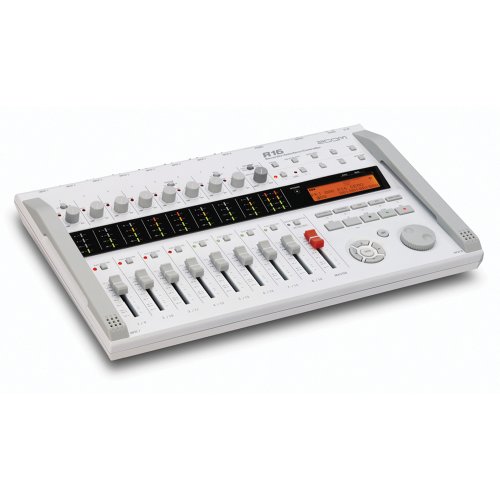 The Zoom R16 is step up from the R8. It can capture eight tracks simultaneously and will playback sixteen. When used as an audio interface, it can input eight and output them as two. This device has a ‘Mackie emulation’ mode, making it great to use with Cubase or Logic, and it even comes with a download code for Cubase LE8. There are built-in effects for vocals, guitars and bass included, as well as a large collection of amp simulators.

The Zoom R16 will suit musicians who are already familiar with music production and want something portable to use as they travel. Less so if you just want something simple. 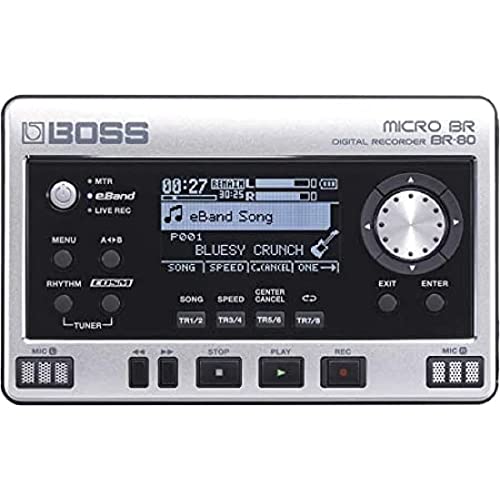 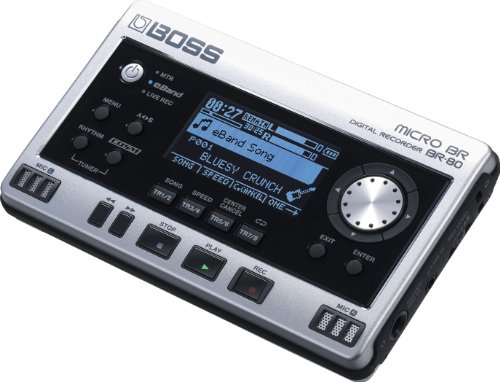 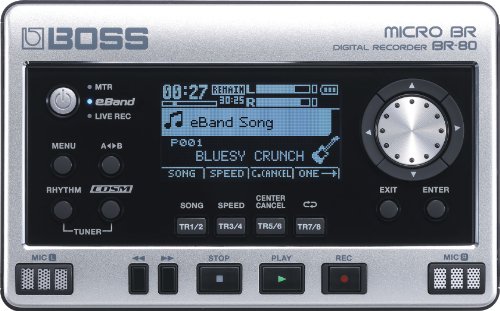 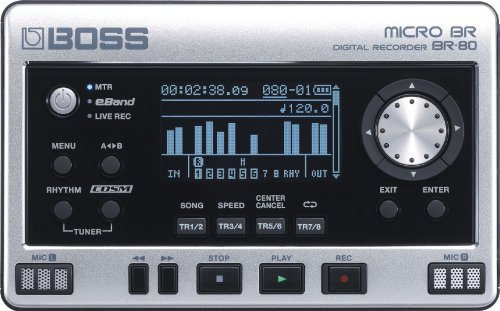 The Boss Micro BR-80 is a small, portable eight-track machine that won’t make too big of a dent in your bank account. It has easy-to-navigate buttons as well as a wheel to take you through your saved songs and to navigate through different features. Only two tracks can be laid down simultaneously, and eight can be played back.

The Micro BR-80 also has built-in effects suited to guitar, bass, and vocals. There are backing tracks and rhythm backings included, too, so you can jam with this little machine.

It comes with editing software that you can use with the device connected via USB and this machine also works as a USB audio interface. To power it, you’ll need either 4 AA batteries or to use the included DC adapter.

The Micro BR-80 will suit songwriters who like to grab their ideas as they become inspired. It will be less suited to those who are looking to create a more professional end product, as its small size makes advanced recording difficult to achieve (there are only eight tracks). 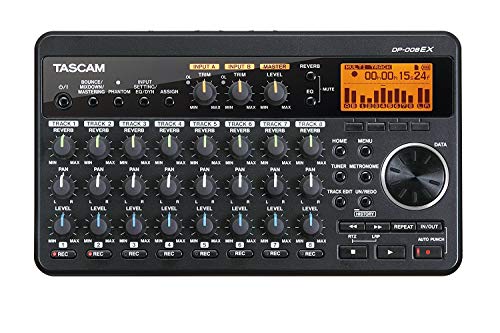 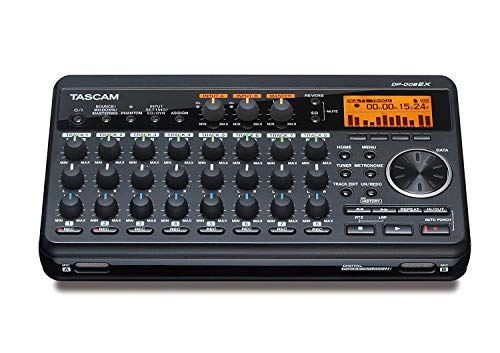 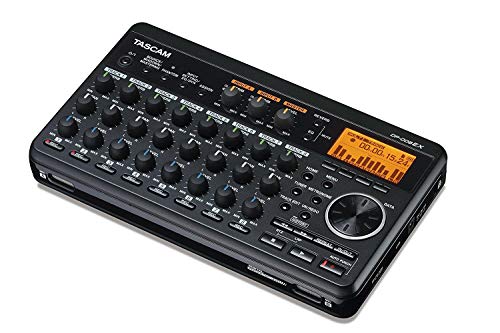 The DP-008X takes things a bit further than the 006. As the name suggests, it can playback eight tracks simultaneously. Still, just two can be recorded at the same time, but it gives you more creative options if you’re a songwriter looking to add layers to a piece of your music.

The DP-008X also works well as an audio interface, but still needs to be powered via batteries or an adaptor. There are a built-in tuner and metronome and the condenser microphones are of surprisingly high quality. Each of the tracks has panning, level, and reverb controls, giving it the edge on the 06 which lacks the reverb.

The Tascam DP-008X will suit songwriters who are looking for a portable device with which to capture quality-sounding demos, to submit to labels or to share with others. It will be less suited to musicians looking for something that works like a full-on studio, due to its limitations in terms of effects and simultaneous recording. 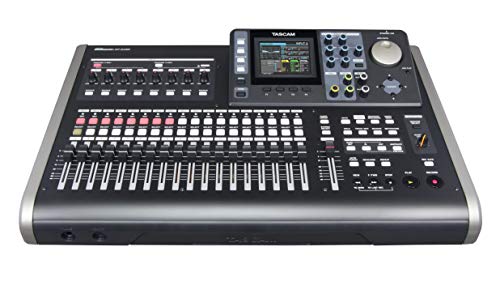 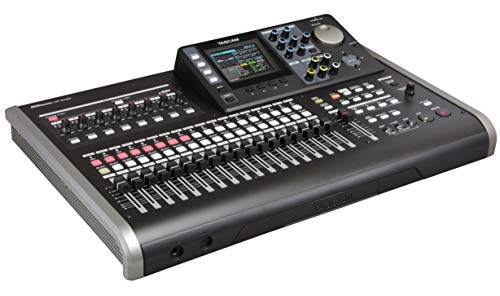 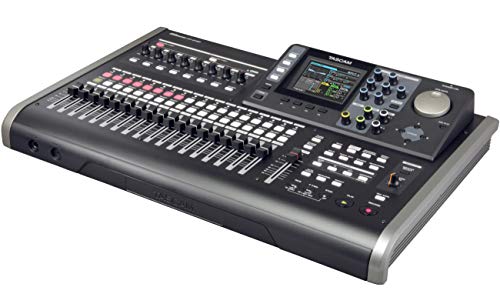 The Tascam DP-24D is a twenty-four track device that works just like a traditional mixing desk and software combined. It’s big, bulky, and substantial, making it a serious buy for any musician, with a price tag to match. The design itself is intuitive, with faders, LED buttons, wheels, and knobs. There’s a small screen to help you to navigate your activity and there’s a USB output for when you’re ready to export.

The DP-24SD has a lot of built-in effects and can record eight tracks at once, making it suitable for capturing drum kits.

It will be well suited to bands who want to make a full recording of studio quality. It will be less suited to those looking for something cheap, small and portable.

What is a Digital Multitrack Recorder?

A digital multitrack recorder is basically a recorder, the same as you have on your smartphone, only they have multiple channels (or ‘tracks’) that can be played recorded on top of one another, and played back together.

They typically have built-in condenser mics (often stereo condensers, some even have XLR inputs) that not only let you record, they also let you mix ‘on the fly’ too.

Many also include drum machines, samplers, and simple mastering effects.

You’ll often see numbers four, eight, sixteen, or twenty-four in the title. These numbers refer to how many tracks can be simultaneously played back (devices vary in the number of how many can be recorded together). If you’re considering laying down several instruments at once, the higher the number the better, but the greater the number the more complexity you add, which can be counterproductive to the creative process.

Many have some built-in effects. If you already have some decent effects pedals, look for a recorder with a loop/send option that will allow you to include those effects. If you just want a machine for getting your rough ideas down, effects won’t necessarily be a requirement.

Some of these machines include ‘virtual track’ features. This is excellent if you’re looking to ‘mixdown’ several tracks into one. This feature allows you to record over a part several times, without erasing what you had previously. It also means that everything is recoverable, a bit like pressing ‘undo’ on your computer.

Many have USB or micro-card export functions. Some export only a finished audio file, while others let you export editable ‘works in progress’, which can then be mixed in music production software. If you would like the option of exporting an editable project, look for one that’s designed to be used in combination with computer software. Many machines are also equipped to take SD cards for this reason.

So, Which Should You Buy?

Our top prize goes to the BOSS BR-800, a powerhouse of a machine that not only looks great, but packs one hell of a punch. It’s the perfect songwriter’s companion, basically.

Want to spend the minimum possible? Then check out the Tascam DP-006, a compact, 6 track recorder with dedicated knobs per track that produces ‘CD quality’ recordings.

If you want more tracks, this beast of a recorder has 24, with the ability to record 8 tracks simultaneously. It has built-in stereo condenser microphones too.