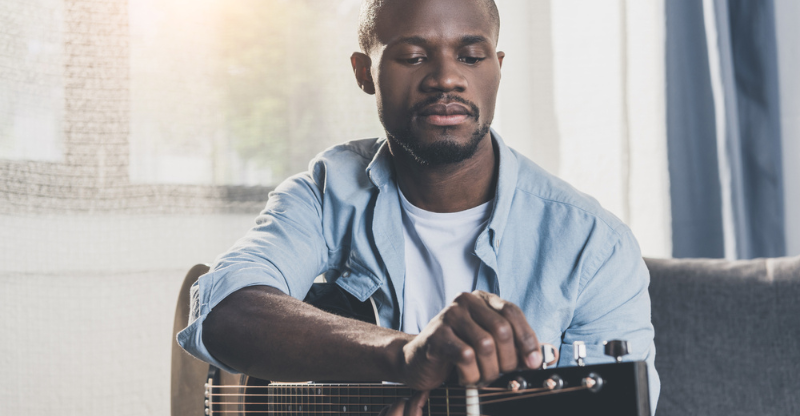 Drop D tuning refers to tuning the low E string on a guitar a whole step down to the note D. Alternate tunings like drop D give the instrument a haunting, empowering sound and offer more flexibility to play power chords and chord voicings while songwriting.

Spanning a wide range of genres, including folk, rock, pop, and metal songs, check out some of the best drop D songs below.

Folk legend Neil Young is known for his songwriting featuring alternate tunings. His various unique chord voicings give rise to music that often feels dreamy and nostalgic. In his single ‘Harvest Moon,’ he pays homage to one of his favorite forces of nature, the moon, as he describes two lovers dancing under it and celebrating life.

Related: This song features on our list of good slow dance songs.

At its core, one of the Foo Fighters’ biggest hits, ‘Everlong,’ is about true love that lasts. The uplifting rock song, heavy on electric guitar and frontman Dave Grohl’s commanding voice, is one of talk show host David Letterman’s favorite tunes. He even once said the song helped save his life. Despite its enduring quality, it only took Grohl about 45 minutes to write it.

Beatle member John Lennon wrote ‘Dear Prudence’ while on a meditation retreat in India. Several others joined him, including actress Mia Farrow’s sister, Prudence. She was suffering from depression and attended in hopes a guru could help guide her out of it. Lennon was so struck by her and her state of mind while on the trip that he wrote this great song to help her feel better.

Released in 1969 on the Led Zeppelin II album, ‘Moby Dick’ is a rare instrument-only track. Meant to feature the stunning skillset of drummer John Bonham, he would often take a long guitar riff solo when playing the song on tour. The solos were so exhaustive the rest of the band had time to step off-stage and take a smoke break.

Related: Find this song on our playlist of the best drumming songs.

Band member Lindsay Buckingham wrote ‘Never Going Back Again,’ among many other songs, after his complicated breakup with fellow Fleetwood Mac star Stevie Nicks. This tune would end up on their famous Rumours album. The song has been described as “bubbly” and “SoCal,” with idealistic views of relationships. The acoustically driven song features Buckingham accompanying himself on guitar with a flawless Travis picking technique.

Written during a long cross-country road trip with friends, Bob Dylan penned ‘Mr. Tamourine Man’ in honor of fellow musician Bruce Langhorne. For many of Dylan’s early recordings, Langhorne was often in the studio helping with production. On one track, in particular, he played a gigantic tambourine that left a lasting impression on Dylan, eventually giving way to this international hit.

Appearing in the 2008 film Twilight based on Stephanie Meyer’s first book in the series for teens, Paramore’s ‘Decode’ acts as a symbol for the tension and confusion in main characters Bella and Edward’s relationship. In the story, Bella is the only one who has thoughts the vampire Edward can’t read, and Paramore frontwoman Hayley Williams uses this plot twist as the main focus for their single.

Related: Check out more songs from the Twilight soundtrack.

Kurt Cobain’s gritty, guttural vocals and open-ended gothic lyrics make ‘Heart Shaped Box’ classic Nirvana. A song exploring the meaning of life, the pain of love, and emotion within art and creation, it is rumored the late artist’s tune was first titled ‘Heart Shaped Coffin.’ Many speculate the song is partly about his troubled relationship with girlfriend Courtney Love.

Inspired to write this philosophical song after a camping trip along Lake Superior, frontman Dave Matthews tackles the world’s complicated history in ‘Don’t Drink the Water.’ The complex tune brings light to civilizations in America, South Africa, and beyond before modern-day colonization took place. Matthews mentioned in interviews after the song’s recording he was better able to formulate the tune after reading the work of activist Noam Chomsky.

Related: You can find this song on our list of popular songs about nature.

Greg Allman penned this outlaw tune in 1970 and released it on the Allman Brothers Band album Idlewild South. The anthemic, southern rock tune follows a man in trouble trying to evade the law. The often covered track speaks to people who live life on the road, floating from place to place and never really being able to make plans for the future.

The first single released on their studio album King of Limbs, the meaning behind Radiohead’s ‘Lotus Flower’ remains open to interpretation. It could be viewed as a coming-of-age story or one about the complexities of young romantic relationships. In many Asian cultures, the lotus flower represents the feminine divine, purity, and fertility. This song was nominated for a Best Rock Song Grammy in 2012.

Related: Find more flowery tunes on our list of songs about blooming.

UK songwriter Ed Sheeran initially released ‘One’ as an acoustic song. He also included it on his 2nd album, x. He wrote the tune while performing for a series of dates in Australia. The song centers around a former romantic relationship from his teenage years. It was the last song he wrote for “Alice,” and it finds him saying he’ll treasure their time together even though their romance ended.

Related: Get your hopes up with the best songs about second chances in love.

One of Soundgarden’s biggest hit singles that solidified their legacy in the Seattle grunge scene, ‘Black Hole Sun’ received significant radio play despite its depressing tone and lyrics. Late frontman and songwriter Chris Cornell previously mentioned in interviews getting his dark thoughts out in music helped him feel better. The musician tragically took his own life in 2017.

Featured on the soundtrack to the sci-fi film Transformers, songwriter and Linkin Park frontman Chester Bennington wrote the tune about facing one’s regrets and trying to move forward and become a better person because of them. The singer tragically took his own life in 2017 after a long battle with depression.