It Takes Two. There are the 23 Best Duet Karaoke Songs 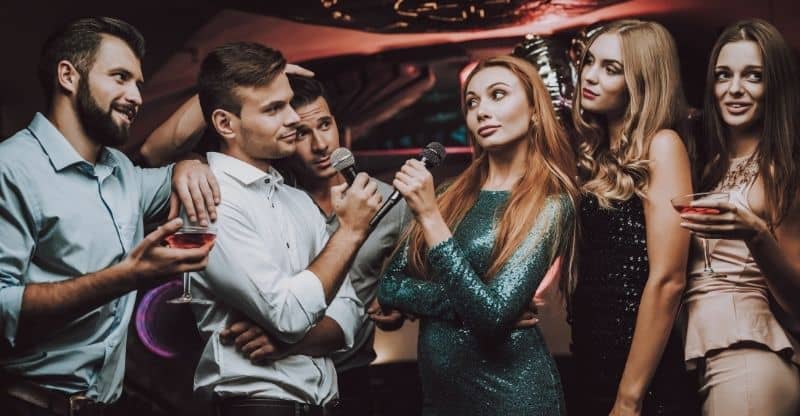 It takes two baby, just me and you!

One of the best things you can do on a karaoke night is sing a duet. They’re a lot of fun and take the pressure off a little if you’re not so confident a singer.

Plus, as you’re about to see, there are some flippin’ amazing songs to sing!

So here are the best duet karaoke songs to wow your friends. Enjoy.

‘Shallow (from A Star is Born)’ – Lady Gaga and Bradley Cooper

This country-tinged Lady Gaga/Bradley Cooper duet appears in the movie A Star is Born and has become a modern-day karaoke duetting classic! Legendary producer Mark Ronson co-wrote it, so it has his masterly touch too.

Related: hear more songs from the star is born soundtrack.

If you’re out with friends who love a bit of ’80s cheese, then this Bill Medley/Jennifer Warnes classic from the Patrick Swayze movie Dirty Dancing is a must-sing tune. It’s one of the best duets on the list.

‘I Knew You Were Waiting’ – George Michael and Aretha Franklin

This coming together of pop icon George Michael and soul legend Aretha Franklin took everyone by surprise when it came out, but it was a match made in heaven. It’s one of the sweetest ‘waiting for you‘ songs you’ll ever hear. I guarantee everyone will love it.

This one is another gold standard of karaoke duets. It’s back when Elton John has real hair (yep, it’s that old), but it’s sure to liven up any karaoke session. Pair it with ‘Cold Heart’ (see below) for an Elton John lovefest!

Ok, we’re really plumbing the depths of yesteryear with this one. This song was a coming together of two legends, so this is a perfect song for any Beatles or Motown fans out there.

‘Up Where We Belong’ – Joe Cocker and Jennifer Warnes

If you have a gravelly voice like Joe Cocker, you need to try this popular song. It’s appeared in the classic ’80s movie with Richard Gere, An Officer and a Gentleman (you know, the scene at the end when he rescues her from her job on the factory line.)

‘Islands in the Stream’ – Kenny Rogers and Dolly Parton

This is easily one of the best karaoke duets of all time, especially if you love a bit of the old country vibe. Pair it together with Parton’s work song ‘9 to 5’ from our list of best karaoke songs, and you have you’ll have the audience eating out your hands.

‘Fairytale of New York’ – The Pogues and Kirsty MacColl

If it’s a Christmas karaoke session, then ‘Fairytale of New York’ simply has to be sung. It won’t matter if you’re blind drunk when you try it. Singer Shane MacGowan almost definitely was when he sang the guy bit 🙂

If you’re a couple and want a love song to demonstrate your eternal love, then this one should be at the top of your list. Just check your audience is ready for this outpouring of love between the two of you. That, or provide some sick buckets in case it makes them feel queasy.

If singing karaoke duets is not your thing, but you feel the peer pressure, then ‘Empire State of Mind’ might get you out of trouble. It’s a great song that will keep your credibility intact, provided you can hit the high notes.

‘Under Pressure’ – Queen and David Bowie

Here is another perfect union of rock stars, with David Bowie and Freddy Mercury of Queen joining forces for this slamdunk of a tune. It’s one of the best duets in the rock genre.

Back on the soul train, Marvin Gaye and Tammi Terrell’s classic ‘Ain’t No Mountain High Enough’ has a speaking bit at the beginning to ease yourself in. Then it’s full-throttle on the chorus!

The minute that walking bassline starts, you should have everyone’s attention with this fun song. Follow it up with their other duet (‘Summer Nights’), and you’ll have yourself a Grease extravaganza!

‘Beauty and the Beast’ – Ariana Grande and John Legend

The theme song from the Disney movie Beauty and the Beast is a fairy story about a cursed prince-turned-beast who needs true love to get his dapper looks back.

Looking for a duet for two women? Then check out ‘Pretty Girls.’ Azalea said she was going after the Geena Davis look for the music video.

If you’re looking for a decent country song duet, then this might work. It’s a breakup song by pop icon Christina Aguilera and country star Blake Sheldon.

If you’re into rap, then this classic is one to try. It’s one of the best songs about betrayal of love. But beware, Eminem is no slouch on the microphone, so you’ll need some crazy good vocal skills to keep up.

‘Rewrite The Stars’ – Zac Efron and Zandaya (from The Greatest Showman)

Any fans of musicals out there? Then you’ll surely love The Greatest Showman (it seems that almost everyone does.) This duet between Zac Efron and Zandaya is one of the highlights and is definitely worth trying. It’s a catchy song, and the karaoke bar will thank you for it!

Here’s a sort of Elton John medley featuring some of his songs with a ‘club-ready beat.’ It starts with the lyrics from ‘Sacrifice,’ then the chorus from ‘Rocket Man,’ plus there’s a variety of other bits of songs (from the ’80s song ‘Kiss The Bride,’ for example.)

‘When You Believe’ – Whitney Houston and Mariah Carey

Here’s a song about faith from pop divas Whitney Houston and Mariah Carey. The message is that miracles can happen if you believe in God. It appeared as the theme for the movie, The Prince Of Egypt.

This duet between Phil Collins and Earth, Wind and Fire vocalist Phil Bailey proved to be a hit for the pair of them, doing exceptionally well in ’80s dance clubs.

Here’s a duet with Destiny’s Child’s Kelly Rowland and rap star Nelly. The ‘Dilemma’ is that she’s with her boyfriend (played by Nelly) but has feelings for another guy. That is a dilemma!

Here’s a song about life changing before your very eyes. It was written on a trampoline in Swift’s backyard while Sheeran was over at her house in LA. It will be the perfect karaoke duet for younger audiences.

Here’s a song about people who present a phony image of their lavish lifestyles and wealth (it’s directed primarily at some rappers).