Enjoy the Fluttery Feel of These 17 Best Flute Songs 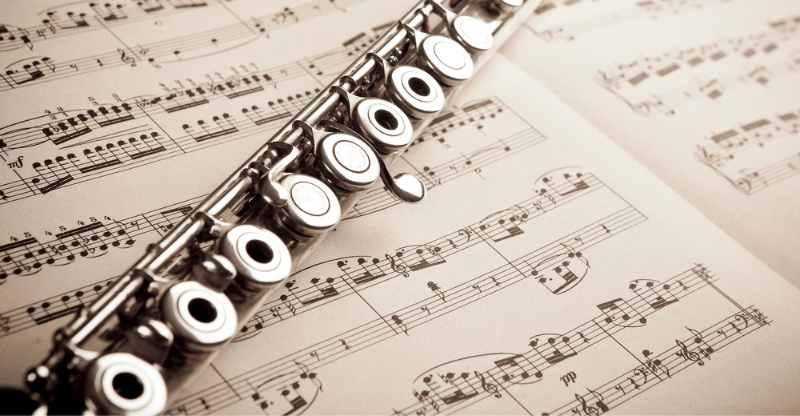 Flute music can give any song an earthy sound and vibe that are hard to resist. Many musicians of today and yesterday have used flutes to give their songs a unique quality—flutes aren’t limited to classical music!

Here are some of the best flute songs to show you how enduring these wind instruments have been. Flute players and casual listeners alike will love them!

California Dreamin’ – The Mamas & the Papas

This song is highly relatable to listeners who have ever dreamed about being somewhere they miss, especially if they are craving a different type of weather. Michelle Phillips was inspired to write the song by a winter in New York City that didn’t live up to her California standards.

Related: Check out our list of songs about California.

‘Sure Shot’ is rare in the rap genre in its use of flute music. The flute solo sample was lifted from Jeremy Steig’s performance in 1970’s ‘Howlin’ for Judy.’ The song finds the Beastie Boys apologizing for the questionable attitudes toward women at the height of their careers. If you’ve been playing flute and need something other than a flute concerto, this one is sure to spice it up.

You’ve Got to Hide Your Love Away – The Beatles

Some listeners have wondered if this was possibly the first track about hiding homosexual relationships. John Lennon is recorded as having said that this was one among many songs that he had written without putting his own emotions into it, but Bob Dylan inspired him in its style.

House of the King – Focus

This is an instrumental piece with a great flute part. It was released in September of 1970 on the album Focus Plays Focus by the Dutch band Focus. It is played in a style known as baroque pop and was based on an instrumental piece that the band improvised during a technical glitch at a concert in Mallorca.

Going Up the Country – Canned Heat

The narrator wants to escape, possibly with a love interest or other loved ones, such as friends. He hints that they might even leave their home in the United States. It seems he wants to find somewhere wonderful to go so they can feel carefree for a while.

Related: This song features on our playlist of songs about going places.

‘Mama’s Gun’ tackles the tough and controversial topic of mental health struggles—specifically those of a woman having problems with her husband, it would seem. She might be going stir-crazy: “In the summer silence, I was getting violent.” This piece samples the song ‘Mr. Guder’ performed by The Carpenters.

Randy Bachman was inspired to write this song from a line in Bob Dylan’s ‘Ballad in Plain D.’ It’s about a woman who crossed a line that she didn’t know would be so problematic for her. Now it’s too late to turn back, and she is living a kind of morally questionable and dark life.

Here’s a song that consists of one verse performed by Keith Howland. He sings to a love interest, asking her to promise to be with him and to make his life better. He finally realizes how much she means to him and wants to let her know while they are together.

I Talk to the Wind – King Crimson

This song was released as the second track on King Crimson’s first album. It’s an introspective piece about thoughts surrounding religion and the greater good, with God portrayed as the wind—powerful but impossible to see. The track also includes an instrumental break.

Related: These songs with wind in the lyrics will blow you away.

Living in the Past – Jethro Tull

This was Jethro Tull’s first charting single, hitting number three in the United Kingdom. The flute sound in this standalone track is Ian Anderson’s trademark. While the song seems to be a declaration of love to a romantic interest, the song is also sometimes interpreted by listeners as a message of devotion to God.

Hole in My Shoe – Traffic

Traffic sings about albatrosses and holes in shoes here, suggesting that the lyrics are about personal or universal struggles. The midsection is a spoken verse from Francine Heimann, Chris Blackwell’s daughter, who spoke because she couldn’t sing.

Related: Step over to the best shoe songs.

This is a great song to add to your flute repertoire if you’re a flute player! Lizzo finds herself relieved to be releasing new music projects in this track. The song was first announced on The Late Late Show with James Corden; the next day, Lizzo released the first lines in a TikTok video. It was Lizzo’s second song to hit number one on the Billboard Hot 100 chart and was her fourth to hit the Top 10 on that chart.

‘The Mighty Quinn (Quinn the Eskimo)’ is actually a Bob Dylan song, but Manfred Mann released it before he did; his version was called ‘Quinn the Eskimo.’ While it is unclear exactly what the song is about, it may be about substance use.

There is a Mountain – Donovan

Change is a common topic in songs; this example was adapted from a Zen proverb. This was used in commercials for the Toyota RAV4 car in 2008. It has also been covered by Kenny Loggins and adapted by The Allman Brothers.

Related: Find similar songs on our list of the best songs about mountains and valleys.

This piece tackles the renewal and chances for redemption during the spring, as the title suggests: “As the spring is made alive, the winter dies.” The flute feature is played by Tim Smith, who got his start playing the saxophone.

Related: Ready to warm up? Here are some songs about spring weather.

‘Katmandu’ explores Cat Stevens’ fascination with Eastern religions and their beliefs in peace, at least in part. Kathmandu is the capital city of Nepal, as well as its largest city. He seems to be preparing to go to Kathmandu soon. It’s unclear why Stevens left out the “h” in the song’s use of the city’s name.

This was originally intended to be a song called ‘Family’ on a demo album that Genesis distributed, which was rejected by multiple record companies. According to Anthony Phillips, who co-wrote the song, it is about a man dying of cancer.