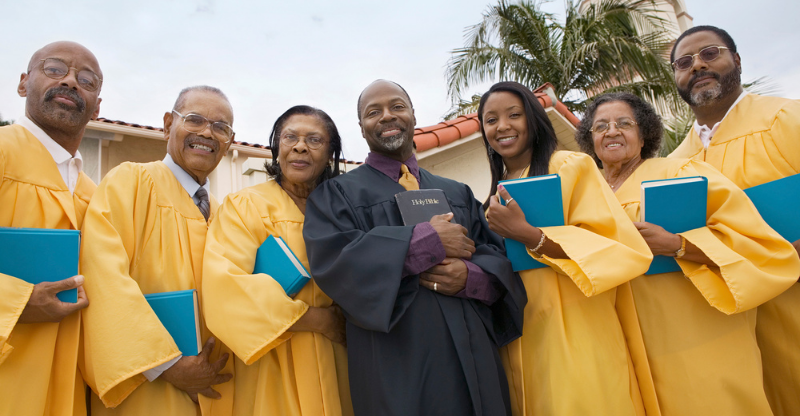 Many music lovers find comfort in the Christian values and celebrations in gospel music. Many artists have dabbled in the gospel music art form throughout the decades, even if they are not typically remembered as Christian singers. Here are some of the best gospel songs in history and facts about each.

Everybody Gonna Have a Wonderful Time Up There – Sister Rosetta Tharpe

Numerous artists have performed this gospel classic, but Sister Rosetta Tharpe’s version is among the most popular. Gospel legend Tharpe frames the “coming rapture” as a wonderful time for all souls to be welcomed by God.

This classic gospel song celebrates and worships Jesus, but it reaches a broader, secular audience with its optimistic sound and message. In fact, it was the first gospel song to reach true secular success. Many consider this the best gospel song ever.

This gospel medley celebrates God and his gifts of abundance, life, and joy. After their releases, all of Ricky Dillard’s gospel albums appeared on Billboard’s Gospel Albums Chart.

(There’ll Be) Peace in the Valley (For Me) – Elvis Presley

Elvis was a later performer of this gospel classic written in 1937, but his version was among the most popular. It encourages listeners not to give up hope, as God’s gifts are many—even in an imperfect world—and life is not eternal.

This track is about praising God no matter what happens and thanking God for giving one freedom. It was Mary Mary’s debut single as a Christian duo, though some audiences found the track too secular. Nonetheless, it was popular among gospel listeners, R&B fans, and pop enthusiasts alike.

Jesus on the Mainline – Ry Cooder

‘Jesus on the Mainline’ has been performed by many artists over the years, crossing over to the countryside of music more than once. This track tells listeners that they can call Jesus anytime, and he will answer.

Aretha Franklin gave new life to this gospel staple when she covered it in 1972. The first known recording was from 1915, but it was written in the 1800s during the American Civil War. It’s based on biblical stories of God’s salvation.

I Saw the Light – Hank Williams

Here’s a track about redemption from sin after seeing the light of God. It was inspired by Hank Williams’ own life and was written on a night when his mother saw a literal light on the way home from a concert. This is a gospel hit song that’s still sung in many churches today.

Touch the Hem of His Garment – Sam Cooke

This song is about a woman who wants to touch the hem of Jesus’s garment to be healed from illness. It was written by Sam Cooke and performed by Cooke and the gospel group he was a part of, The Soul Stirrers, in July 1956.

Never Would Have Made It – Marvin Sapp

This tribute to Marvin Sapp’s father was written after his death. It remained at Number One on the American Gospel radio chart for 46 weeks as the longest-running song to ever chart for that long across all genres.

Here is a musical version of the traditional Lord’s Prayer, written by Albert Hay Malotte in 1935. Since then, it’s been covered by numerous celebrated musicians, including Dinah Washington.

‘Awesome’ is a modern gospel track by pastor Charles Jenkins released in 2012. It’s about the awe-inspiring love and grace of God. It was Jenkins’ first single as a gospel musician.

Can the Circle Be Unbroken (By and By) – Carter Family

This country-gospel track is also known as ‘Will The Circle Be Unbroken?’ It describes a funeral and the comfort of knowing a loved one is with the Lord. The Carter Family version differed from the original and was released in 1935.

In this piece, the Clark Sisters sing of being blessed, favored, and saved by God. It won two Grammy Awards after its release in 2007 and appeared on The Clark Sisters’ live album Live — One Last Time.

This song possibly ties Nina Simone’s religious faith to her desire for social justice. Simone’s version is a cover of a traditional African-American spiritual song inspired by the Book of Exodus.

My God is Real – Johnny Cash

Also known as ‘My God Is Real (Yes God Is Real),’ this track is about knowing that God is real and having faith even when other things in life may seem uncertain. It appeared on Johnny Cash’s eleventh album and his second gospel album.

Tasha Cobbs Leonard discusses the power of Jesus’s name to break chains in this gospel piece. It was certified Platinum in the United States in 2019 after receiving over 840 million streams and 1,000,000 sales.

While it is one of Alan Jackson’s most popular gospel songs, he was not the first artist to record ‘The Old Rugged Cross.’ It’s considered one of the best gospel songs of all time because it cherishes the cross and all that it stands for among Christians.

This song discusses how God is worthy of praise and worship. Hezekiah Walker wrote and released this track as the head pastor of the Love Fellowship Tabernacle in New York. The lines were written to align with Scripture and use repetition to make their points.

Wings of a Dove – Ferlin Husky

Ferlin Husky was the original singer of this track written by songwriter-producer Bob Ferguson, but many famous individuals have covered it since. Examples include Robert Duvall in his Oscar-winning role in the film Tender Mercies and Dolly Parton in an extended 1971 version produced by Ferguson. The track is based on the story of Noah’s Ark.

I’ll Take You There – The Staple Singers

This was the first of The Staple Singers’ two Number One hit tracks. The group was one of the first to bring the gospel style to the spiritual music arena. The track has Jamaican and reggae influences and is about finding faith and peace after suffering from grief.

He’s Got the Whole World in His Hands – Mahalia Jackson

Here’s a simple classic track about God having the world and its people, places, things, and other elements in his “hand.” It’s a traditional African-American spiritual piece written in 1927 and popularized by English singer Laurie London in the 1950s. Many artists have covered it since then, and it remains a popular gospel piece among varied audiences to this day.

This version of ‘I’ll Fly Away’ appears as part of the O Brother, Where Art Thou? soundtrack. After appearing in the film, it won an IBMA Award, while the entire soundtrack won a Grammy Award. It’s about going to live with God in Heaven after death and the beauty that will encompass such an experience. This is another great song that many people consider one of the best gospel songs of all time.

This chart-topping gospel piece is about believing in God and trusting his process even when things are hurting you in life. Andraé Crouch wrote it while experiencing loss and suffering in his life after his brother’s death.

Tennessee Ernie Ford encourages listeners to believe in the old-time religion that allowed ancestors to go to heaven in this track. It’s a traditional gospel song first released in 1906 by the Haydn Quartet with Orchestra and first recorded in 1960 for the album Sing a Spiritual With Me.

Many people listen to songs about losing someone when they grieve. This song is about Christians celebrating that they will go to live with the Lord after death and a life of service to God. Lady Tramaine Hawkins re-recorded the track in 2020 as a tribute to the suffering occurring due to social injustice in the United States and global disasters.

Leonard Cohen originally wrote and recorded the famous ‘Hallelujah,’ but it wasn’t popular until Jeff Buckley recorded it in the 1990s. While the meaning of its abstract lyrics is not always considered spiritual in nature, 8-year-old Rhema Marvanne’s cover was decidedly gospel. Since its release, numerous artists have covered the track, and it has made countless appearances in pop culture.

Related: You can find another cover of this song in our playlist of best songs from Shrek.

More of the best gospel songs: