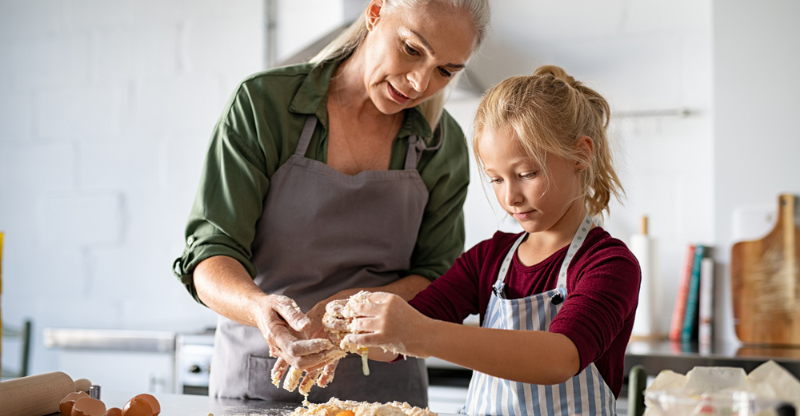 Grandmothers teach great life lessons and sometimes recognize children’s special abilities before their parents even do. Artists from John Denver to Alicia Keys were encouraged early on by their grandmas to pursue their artistic dreams.

From Taylor Swift’s pensive ‘Marjorie’ written for her opera-singing grandmother, to Carrie Underwood’s highly emotional ‘Forever Changed,’ check out this touching playlist of the best grandma songs to pay tribute to our grandparents.

From the time John Denver was a young boy, he and his grandmother shared a special bond. As a musician herself, she recognized his artistic abilities early on. She even gifted him his first guitar. His lovely song ‘Grandma’s Feather Bed’ pays tribute to his many summers spent with her on her farm and the joy he gained from being surrounded by family.

Related: Need a grandpa song? Hear this song on our list of songs about grandpas.

Despite Bill Withers’ huge hits like ‘Lean on Me’ and ‘Ain’t No Sunshine,’ his reflective single ‘Grandma’s Hands’ was his favorite. He wrote it in honor of his grandmother, who greatly influenced his life, protecting him from bullies and looking after those in society who needed a helping hand.

Related: Check out this song on our growing old songs playlist.

Like country and western musician John Denver, singer-songwriter Ed Sheeran had a grandmother who encouraged him to pursue his musical interests. The day Sheeran got the news she had passed, he sat down and wrote this emotional tribute to her. ‘Supermarket Flowers’ focuses on the moment his family emptied her hospital room, and he found a beautiful vase of flowers blooming on the window sill. It’s a sweet song and also serves as an appropriate funeral song, if you need one.

Related: You won’t want to miss these songs with a flower in the title.

Southern culture is often built upon matriarchal traditions, and Zac Brown’s upbringing was no different. Appearing on Nashville producer Dave Cobb’s concept album, Southern Family, Zac Brown wrote this nostalgic tune in honor of his grandmother and his wonderful memories with her. The beautiful country song evokes the feelings that come along with close familial relationships by utilizing a moving string section in the recording, and will transport you straight to grandma’s house.

Related: If you made memories in a garden, you’ll love the best songs about gardens.

R&B icon Alicia Keys penned this raw and honest track after experiencing the trauma of watching someone you love pass away. After her grandmother’s death, Keys realized there were so many things she wished she had talked to her about while she was still alive, so she wrote ‘Tell You Something.’ The stirring song focuses on telling those close to you how important they are before it’s too late.

Related: Here are the best songs about losing someone you loved to help you through it.

Musical prowess is multi-generational in Taylor Swift’s family. Long before Swift broke into the top ten with her debut hit ‘Tim McGraw,’ her grandmother Marjorie Finlay was a successful opera singer. Finlay passed away when Swift was a young teen trying to make it in Nashville. The distance added an extra layer of mourning for Swift, who penned ‘Marjorie’ while working through her grief.

“Silver gray hair neatly combed in place. There were four generations of love on her face.” R&B artist Dianne Reeves wrote ‘Better Days’ during her time spent in California in the ’80s. Considered one of Reeve’s best songs by fans, many simply refer to it as ‘The Grandma Song.’ Featuring poetic lines and moving imagery, Reeves penned the track as a source of light for others, conveying the inner strength she gained from having a close relationship with past generations in her family.

“You’ve come a long way, baby.” Singer Robbie Williams meditates on what his grandmother would say to him in present-day as she looks down on him from heaven. Williams was very close to his grandma, Bertha, and even got some ink in her honor after her passing, inscribing a “B” behind his ear, so she is with him wherever he goes.

Well-known Nashville songwriter Hillary Lindsey helped write this emotional track with fellow songwriters Tom Douglas and James Slater. The songwriters and their respective families had all been affected by Alzheimer’s disease, and they wanted to write a track to work through their emotions. Though Carrie Underwood recorded it for her Blown Away album, she has yet to perform it live due to her own family’s experience with the illness and the intense emotions that come along with trying to sing the lyrics.

Appearing on his empowering album Always Strive and Prosper, rapper A$AP Ferg talks about his sometimes-tumultuous rise to the top and the important woman who helped him get there, though his inspirational grandmother passed before she could see his success. ‘Grandma’ is a powerful tribute to matriarchal figures everywhere.

“I am the thesis of her prayers.” Several heavy hitters helped make the soul-stirring track ‘Sunday Candy’ happen. Chance the Rapper was the mastermind behind the song, and he partnered with Donnie Trumpet and The Social Experiment for a dynamic performance of the single during a special appearance on Saturday Night Live. Written in honor of his grandmother, he became the first independent artist to perform on the sketch comedy show.

Related: This song features on our playlist of happy music.

Grandma Got Run Over by a Reindeer – Elmo & Patsy

A songwriter of several comedic numbers, Randy Brooks wrote ‘Grandma Got Run Over by a Reindeer’ in the ’70s, and former married duo Elmo Shropshire and Patsy Trigg released it in ’79. The chart-topper is a holiday favorite and a wild, mysterious tale featuring a missing grandmother. Her young grandson has a full plate on Christmas. He’s not only determined to prove who is behind her disappearance, but he’s also on a mission to prove once and for all Santa is real. It’s the perfect song to sing to your grandma if you like to joke around with her!

Related: In the mood for more Christmas songs? You’ll want to see our playlist!

Frontman Gerard Way penned his band’s concept CD, Three Cheers for Sweet Revenge, in honor of his grandmother Elena, who greatly impacted his life. She fostered his artistic nature early on and even gifted My Chemical Romance their first van. The song ‘Helena’ is a moody track that deals with the dark emotions of suddenly losing someone very close to you.

All That Matters – Tom Walker

Singer-songwriter Tom Walker has always been moved by his grandmother’s strength, who remained sunny and positive despite her cancer diagnosis, which she ultimately beat. After her bout with the disease, Walker sat with her one night and asked her to tell stories from her life. Her favorite memories turned into ‘All That Matters,’ which appears on Walker’s album What a Time to Be Alive.

Matt Healy had a close relationship with his grandma, who he called Nana, since he was the firstborn son in the family. Her passing hit him hard, and he penned this sweet and heart-tugging track alongside bandmate George Daniel about everything he wishes he could tell her if only she’d show up at his door one more time. Like artist Robbie Williams, Healy got a tattoo of his grandma’s name, Annie, after she passed to honor her.

More of the best grandma songs: