Which is the Best Guitar of all Time? Here’s Our Shortlist 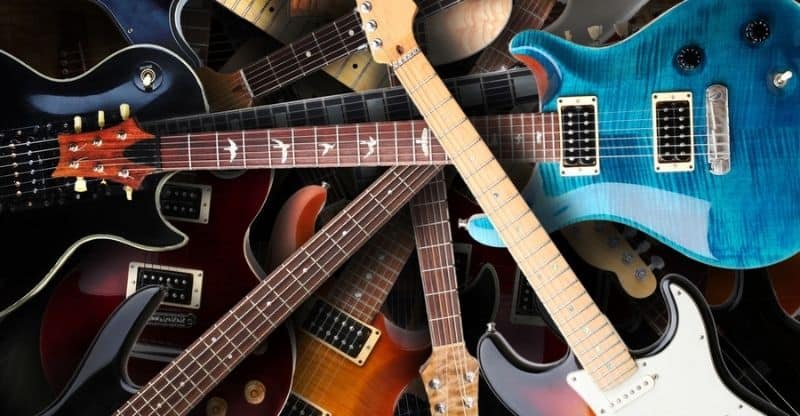 We all have our personal favorites, but which is the indisputable best guitar of all time? That’s the subject of this article.

But we’re not going to do the usual countdown and reveal ‘the winner is…’, because, quite frankly, we think that’s a little juvenile.

Instead, we’re going to include the guitars we think deserve a seat at the ‘table of guitar greatness’ and why they should be there, then let you decide.

Before we go any further, what does a guitar need to have to make it onto the list?

We think it’s a combination of these factors:

1.) the guitar has a distinctive tone that sets it apart from the rest and is easily recognizable
2.) it’s a trailblazer, and introduced some new innovations that didn’t exist before its release,
3.) its contribution to music is significant

Ok, ready to geek out and listen to some of the world’s most iconic guitars? Of course you are, you’re only human 🙂

Initially, the Strat struggled to make a name for itself when it was released in 1954 by Leo Fender.

It was briefly popularised by Buddy Holly before his untimely death in 1959, but other than that, its trendier-looking Jazzmaster sibling looked like it might overshadow the Strat. The future didn’t bode well (for a timeline, check out our Fender Stratocaster History article).

Fast forward a few years to the ’60s, when Jimi Hendrix adopted the Strat as his guitar of choice, and all that changed. Hendrix “caused more Stratocasters to be sold than all the Fender salesmen put together,” said Fender salesman Dale Hyatt.

So what made the Strat one of the best electric guitars ever made?

First, the design, the body is contoured, so it nestles into the player’s body, making it the guitar equivalent of slipping into a hot tub. Then there’s those double cutaways that reach higher on the neck, making the upper frets more accessible.

For tone, there’s the three single-coil pickups that give it that bright, cutting tone that cuts like a knife, and gives you superb tonal versatility. The three single coils pickups are in the neck, middle, and bridge positions.

The two-tone controls and three-way pickup switch (which later evolved into a five-way switch) just enhances its tonal capabilities.

Add to that the whammy bar, and you have yourself a music-making machine at your fingertips.

This guitar shook the music world and changed music history forever. It’s the most iconic guitar in existence, and has been played by a whole slew of great guitarists.

Famous players of the Stratocaster:

The Strat is great for many things, but if you want thick, warm tones oozing out your amplifier, then you need something altogether different. Enter the Gibson Les Paul, another legendary rock guitar that is the yin to the Strats yang, and offers something uniquely different.

The Les Paul is a solid body guitar – notoriously heavy – made of mahogany that gives its that creamy, ‘full-fat’ tone, and helps the notes sustain beautifully.

In fact, many Les Paul aficionados will only play ‘zero weight relief’ models (those that haven’t had any of the heft of the body removed) because they believe it’s the solid mahogany body that gives the guitar its chunky tone (I’m sure their shoulders might have a different opinion though :-).

The Les Paul comes with a pair of humbucker pickups that give you more mid-range and thus a ‘fatter’ sound (see our single-coil vs humbucker guide if you want to geek out further.)

In addition, the set neck improves sustain (versus the bolt-on neck you get on a Strat) and the scale length is shorter, making it slightly easier to play for small hands.

The design is so popular there’s a slew of Les Paul style guitars out there.

It’s popular with hard rock, classic rock, and heavy metal guitarists, as well as the world’s best rock guitarists. It says ‘rock god’ perhaps better than any other guitar, too.

Famous players of the Les Paul:

You know the bit in Star Wars: Return of the Jedi when Yoda tells Luke Skywalker “there is another” (referring to his sister Princess Leia, or possibly Rey), well there is another Fender guitar besides the Stratocaster.

Where the Strat was futuristic in its looks, the Tele is functional. There’s no contouring to make things comfier, it’s a solid bit of flat wood that shouts ‘no gimmicks’ at you loud and clear.

In fact, the Tele was the forerunner of every solid-body electric guitar out there, including the Strat.

Aside from its workingman’s looks, it’s the tone that characterizes it the most. The Tele ‘twang’ is legendary and has become so synonymous with country music, it’s hard to imagine country music without it!

The Telecaster only has one tone control, versus the Stratocaster’s two, and just two pups. A neck pickup and one at the bridge.

Famous players of the Fender Telecaster:

The SG enjoys the same thick signature Gibson sound, but the double-cutaway design gives you upper fret access, like the Strat. The thinner mahogany body makes the tone a bit sharper and not as thick-sounding as the Les Paul. It’s also a good bit lighter too, so it won’t break your back during long sessions.

It’s a popular choice for heavy metal riffs (the double horns are suitably devilish), offers a classic ‘Rock crunch’, and can be used for pretty much anything you can throw at it, from indie to funk to pop.

Famous players of the SG:

Fender and Gibson had the solid-body electric guitar market pretty well sewn up until PRS arrived on the scene in 1985.

The Custom 24 model was the first guitar that Paul Reed Smith (PRS) showcased at the Winter NAMM show in 1985 and has been a top seller ever since.

It packs their much-loved Gen III tremolo system and 85/15 pickups that offer clarity and extended high and low end.

From a design point of view, it looks great too with iconic flying bird inlays on their fretboards.

With a short 24″ scale and infamous pickup switching system, the guitar was considered by many to be too adventurous even for the Fender.

Famous players of the Jaguar:

Before Epiphone became synonymous with budget versions of Gibson guitars, they made some great hollow and semi-hollow guitars like the Casino.

Famous players of the Casino:

The Flying V was Gibson’s attempt to design a modernist answer to Fender’s Stratocaster. With its futuristic looks, it’s easily one of the most distinctive electric guitars ever made.

Famous players of the Flying V:

The Gibson Explorer went against every guitar design in the book when it was released in 1958 alongside the Flying V (see above). Who would have thought that decades later it would become a favorite among hard rock and heavy metal musicians (in the ’70s and ’80s).

Famous players of the Gibson Explorer:

Nobody knew what a semi-hollow body guitar was until Gibson introduced the ES 335. This innovative new design achieved a similar tone to a hollow body but dramatically reduced the feedback, thanks to a solid center block. The ES stands for ‘Electric Spanish’.

One of the prettiest instruments in the guitar world, if not the entire music world. The story of its origins is pretty cool. A chap named Jimmie Webster was Gretsch’s main guitar design guru who was massively into cars. With the White Falcon, he wanted to create the ‘Rolls Royce’ of the guitar world.

In fact, at the 1954 NAMM show where this sparkly gold and white beauty was first showcased, the guitar was displayed on a rotating display, just like a fancy car would be.

Unfortunately, the price tag prohibited most people from acquiring it. They were expensive guitars, selling at around $600 ($6000 in today’s money).

Famous players of the White Falcon:

Back in 1987 when the Ibanez RG550 was released, Fender and Gibson both felt very grown-up (like something you’re Dad would play). The RG550 was presented as a Strat-on-steroids (known as a ‘superstrat’) and was designed for high-performance. It looked the part too, with its ‘young punk’ pointy appearance.

It took inspiration from Steve Vai’s famous JEM777 guitar and was a lesson in what a decent shred and metal guitar should be like:

A lightning-fast neck (low-profile with a flat, wide fretboard), powerful pickups, a reliable tremolo, and excellent craftsmanship throughout.

The Ibanez RG series became the Daddy of the Superstrats, and went on to become one of the most popular metal guitars ever made.

Famous players of the Ibanez RG:

Based on the Gibson Explorer, this guitar became a favorite of metal players in the ’80s, such as Phil Collen from Def Leppard.

Many of the tracks from Eddie Van Halen’s first album were recorded using one too (not his Frankenstrat) and was used for some of his defining early moments. This alone gives this guitar a seat at the table.

Famous players of the Ibanez Destroyer:

First introduced in 1942, this is probably Gibson’s most timeless guitar (and they have a few contenders). This world-renowned acoustic guitar known (colloquially as ‘the workhorse’) is the golden child of dreadnought guitars. With its round-shoulder design, mahogany back and sides, and Sitka spruce top, it delivers punchy bass, warm mids, and a superb dynamic range.

It being a short-scale guitar, it’s easier to play than longer scale length guitars.

Famous players of the Gibson J-45:

The Martin D-28 isn’t just a guitar, it’s an iconic piece of history that became the centerpiece of the folk and folk-rock movements in the ’50s and ’60s.

It’s rich tone, incredible bass and projection made it an instant classic used by strummers and pickers in every sort of genre, from country and bluegrass to all kinds of rock.

Famous players of the Martin D-28:

Any list of iconic guitars has to include the breathtaking Gibson Hummingbird. With its cherry sunburst top and that finely engaged pickguard that gives it a country vibe (even hippy vibe). It’s so striking, it can be seen across a crowded room.

They say that when you play a chord on one of these legendary guitars, you hear every note of the chord, which helps cut through the mix.

How true that is, I have no clue. But one thing I do know: it’s perfect for playing big open chords and adds sweetness and responsiveness that makes most guitarists weak at the knees.

Its incredibly easy to play too, especially if you have small hands, thanks to its short scale length, tapered neck profile, and slim nut width.

For all these reasons, the Gibson Hummingbird has been embraced by some of the world’s most famous guitarists spanning several genres of music. From folk to rock, country to blues. It can do it all. The key to its success is versatility.

Famous players of the Gibson Hummingbird: