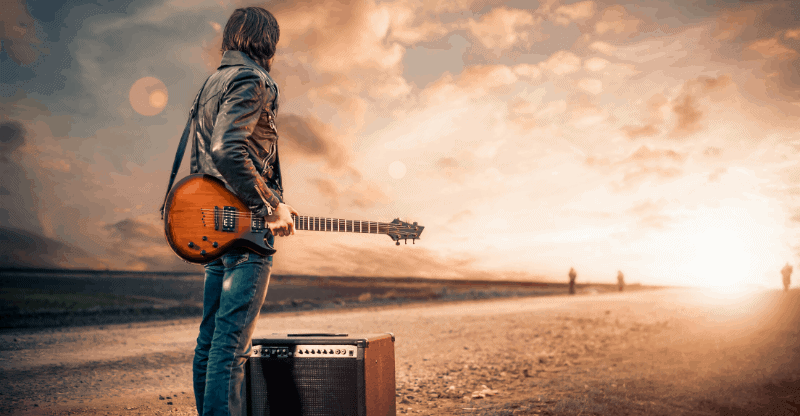 In this article, we tackle that most explosive of subjects, who is the best guitarist to ever live?

Controversially, we’re not going to say who we think the best guitarist is. Instead, we’re going to list all the guitarists who we think deserve a seat at the table, and why, and let you decide.

So what is the hallmark of greatness?

Is it speed, technique, versatility? Sure, those things matter. But to be truly great you need to have your own trademark sound. All the legends on this list have an instantly distinguishable sound. From the first few notes, you instantly know who you’re listening to. And that is one of the key things that makes a great player legendary.

Because the world of guitar is so vast, we’ve grouped the artists by three broad genres: rock, jazz, and indie.

Jimi Hendrix is, without doubt, one if not the most influential guitarists of all time. While many of the people on this list were incredible guitarists, Jimi was a songwriter, singer, and innovator of the guitar and music in general. He was so good, it’s laughable not to include him on any list like this.

His biggest contribution was his inventiveness. Through the use of experimentation and effects, he pushed the boundaries of music and created sounds that hadn’t been made before or since, sadly. He starting off playing the 58 Ozark Supemo, had a brief period playing the Fender Duo Sonic (a popular short scale guitar), and finally found massive fame with the Stratocaster. He was also really into effects pedals too, loving experimenting with wah, univibe, fuzz, and octavia, among others.

Another man who needs no introduction, George Harrison was another guitar player who created his own signature distinct sound through the work he did with the Beatles. So what makes him worthy of appearing in this list, other than the fact he was in the Beatles?

He wasn’t as flamboyant as Hendrix, nor as experimental, but he had a feeling to his playing that many impersonators tried to imitate throughout the late 60s and 70s, but few could get anywhere close. Of course, his songwriting was superb too.

Listen to: Something (track from album Abbey Road)

Guitarist and songwriter with rock titans Led Zeppelin, Jimmy Page is responsible for some of rawest, downright dirty licks in history. As a purveyor of the Les Paul, and the bizarre twin guitar, he deserves to be on the list. He is one of the greatest guitarists that’s ever picked up a guitar. The man behind Stairway to Heaven, Whole Lotta Love and Black Dog, you’d be pushed to find a guitarist more accomplished than him.

Listen to: Led Zeppelin No.4 (album)

Texas-born Stevie Ray Vaughan (or ‘SRV’ for short) was around in the 80s and, like Hendrix, died at a tragically young age and was hugely talented. In fact, you can hear the influence of Jimi in SRV’s playing – he also did straight-up covers of his material, and it’s safe to say nobody had covered Voodoo Chile quite so convincingly.

But he was much more than a credible cover artist. He was in his own right a supremely gifted guitarist who wrote not only some great songs, he had a style and tone to his playing which is very much his own.

David Bowie was quick to spot him and invited him to play on his Lets Dance long play record (LP). The guitar solo on China Girl, that’s SRV right there.

It’s never been cool to like Clapton, but his contribution to guitar-based music, especially blues, is staggering. He started out in the mid-sixties with the Yardbirds and went on to become ‘the guitarist’s guitarist’. So good that when George Harrison needed a lead guitarist for his seminal track ‘While My Guitar Gently Weeps’ it was none other than Eric Clapton who he invited to play on the track.

It’s safe to say that no one plays blues on the Stratocaster quite so well, except perhaps Hendrix, and even Jimi wasn’t quite as slick as Clapton is.

Jeff Beck might not be as famous as some of his contemporaries but listen to his incredible playing and you’ll appreciate his musicianship. The love of music alone is what drives him.

Beck is a musician who flies under the radar enough to take risks and explore in ways his peers can’t. He’s the consummate guitarists’ guitarist and everyone from Clapton to Page have a respect for him like no other.

Not always the most approachable of music, he’s not got the flair or charisma of a Hendrix, he’s a true artist of the instrument.

So what has JB contributed to guitar playing?

Apart from being a great all-round blues player, his way of using a whammy bar deserves special attention. If you watch him closely, you’ll notice he plays vibrato with the palm of his hand and uses the palm of this right hand to change the tone. He creates a swirling, ethereal sound.

Of the rock guitarists, he’s the jazziest of the lot. Although considered a rock guitarist, he’s played a lot of jazz/rock fusion and is respected in the jazz world too.

As the other part of the Jagger-Richards writing, Keith Richards or simply ‘Keef’ as he’s known, has created some of the best alt-rock and rock n roll tunes ever. He’s mainly a rhythm player, leaving lead playing to the late Brian Jones, the superb Mick Taylor in late sixties / early seventies, then Ronny Wood from there.

So if he’s not a lead player, why is he on this list?

For one simple reason, his contribution to guitar music. Think about the riff on Gimme Shelter, Brown Sugar or Jumpin Jack Flash. Or the intro to Paint it Black. The chord sequence of Wild Horses. Or the opening to Honky Tonk Women. Keef is a genius of the guitar, with the swagger and attitude of Captain Jack Sparrow. Fast licks, tapping and any other slick moves are all secondary to the mastery that Keef managed over his career via his beloved Telecaster.

Listen to: Let it Bleed (album)

Django Reinhardt, often simply referred to as ‘Django’ (well before the Quentin Tarantino movie) is regarded as ‘the world’s most influential pre-rock’n’roll guitarist‘. It’s surprising then he’s so unknown – however, many of the greats on this list cite Django as one of their biggest influences.

This is what Stevie Ray Vaughn said about Django in Guitarworld.com “To me, Django and Jimi were doing the same thing in a lot of ways. Django would do it with acoustic guitar and Jimi would do it on electric, using feedback and things. Instead of using feedback, Django would just shake those strings like crazy. And neither one of them had anything to build on … they just did it. Django didn’t have any book or anything to borrow from. He wrote the book. Same with Jimi. Nobody was doing those kinds of electronic things he was doing. He just did it.”

Wes Montgomery is widely acknowledged as one of the greatest guitarists in the history of jazz, and was known for an unusual technique of plucking the strings with the side of his thumb which gave him a distinctive sound (by the way, he didn’t use any type of guitar pick). He also popularised the use of playing octaves.

Listen to: Smokin’ At The Half Note (album)

Recording prolifically and mainly for Blue Note Records as both leader and sideman, Grant Green is simultaneously one of the most and least celebrated guitarists in jazz history, who performed hard bop, soul jazz, bebop, and Latin-tinged guitar styles. He attained a new following in the ’90s when his funk-laded mid-’70s records were spun by rare-groove and acid-jazz DJs and sampled by hip hop and rap bands such as A Tribe Called Quest and Cypress Hill.

An American jazz guitarist, Byrd helped to popularise Brazilian music, especially bossa nova, into North American music. In 1962, he collaborated with Stan Getz on the album Jazz Samba, an album that changed the world.

Bireli Lagrene is a French Manouche (or Gypsy Jazz) guitar virtuoso who came to prominence in the 1980s for his Django Reinhardt-influenced style. His infectious style and ‘joie de vivre’ makes his playing irresistible and one of the most accomplished jazz guitar players of modern times.

Listen to: The Gypsy Project (album)

Pat Metheny incorporates elements of progressive and contemporary jazz, Latin jazz, and jazz fusion into his playing. Over his long career, he’s established himself as one (if not the) most accomplished and respected jazz guitarist, working with everyone from David Bowie to Joni Mitchell.

Listen to: One Quiet Night (album)

Like Keith Richards, Marr is more a rhythm player and maker of catchy riffs than a player of solos. His style was intentionally ‘anti’ what he called ‘all the cock rock’ around in the 1980s. He’s also, like Richards, a songwriter, and penned all the Smiths music (which is some feat). He’s so good that immediately after the Smiths broke up, Talking Heads bagged him for their classic Naked album. See if you can recognize his playing on the song ‘(Nothing But) Flowers‘.

He’s the most influential indie guitarist, so what makes his style so special? His playing has a swagger and gutso that is somehow defiant while being delicate and interesting. His playing is particularly lyrical too, even though he only ever really fingerpicking chords and doesn’t improvise per se.

Listen to: The Queen is Dead (album)

Whereas Marr was all about creating ‘moods’ through fingerpicking arpeggiated chords, Squire was very much a return to the Jimmy Page school of rock. Punchy, growling, distorted lead and tons of improvisation.

Listen to: The Stone Roses first album (especially ‘I am the resurrection’)

Blurs guitar player, the awkward introverted Coxon is who Legendary producer William Orbit named the best guitarist he’d ever worked with, after Johnny Marr. Coxon is technically very strong, and arguably the best indie-guitarist of the past 20 years.

So there you have it, that’s our take on the best guitarists of the past 50 years across three genres.

Use this article as an opportunity to discover new musicians. Nothing inspires you more than when you discover a new guitarist. If you are a guitarist yourself (I hope so, if you aren’t, start here), there will be a whole load of new listening pleasure right around the corner. Go find it.

Have we missed your favorite off the list? Maybe you think Chuck Berry should be there. Or Eddie Van Halen? Or Peter Green of Fleetwood Mac? Bo Diddley? Robert Johnson? Thurston Moore of Sonic Youth? Slash of Guns and Roses? Perhaps we missed some heavy metal players? Or classical players who are amazing?

We get it, there are lots we have missed. Why don’t you make a case for your personal favorite in the comments below? If we agree, we’ll add it to the list.

Mandolin Chords Every Beginner Should Know

What’s the Difference Between an LP vs EP?


As an Amazon Associate I earn from qualifying purchases.
152shares