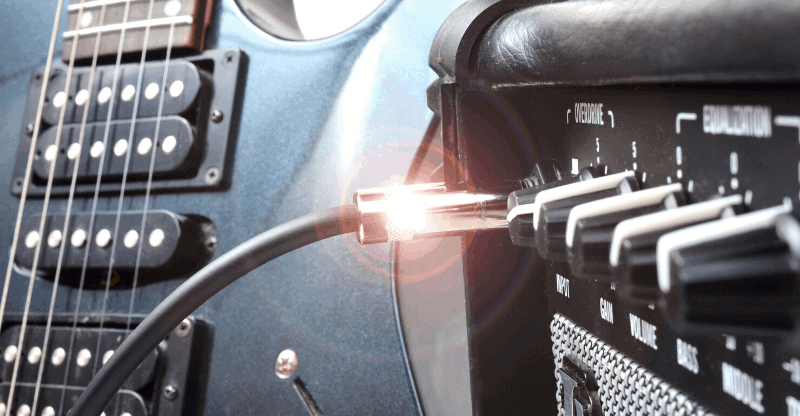 Among the different types of guitar amp out there, the tube amp is king. But if you’ve ever owned one, you’ll know how darn temperamental they can be. They aren’t the easiest or cheapest things to run either.

Despite all of this, people still often prefer them over solid-state amps, due to their warm tone, but nothing beats the reliability of a solid-state amp.

What if you wanted the best of both worlds? A valve amp for that warm, creamy goodness, but with the reliability of a solid-state amp.

Well, you can, and they’re called modeling amps!

In this article, we went in search of the best one, and this is what we found. 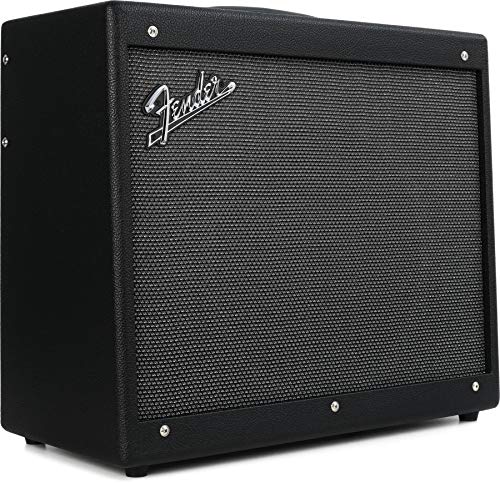 Modeling amps will never measure up entirely to a real tube amp, but the Fender Mustang GTX 100 does a pretty good job while bringing you a whole world of flexibility.

The sheer amount of different voicings is a little bewildering at first. It packs in a massive 200 onboard presets including 39 different amp models and over 70 effects.

Fender tones are obviously a priority with preset one a ’60s Fender Twin Reverb (it being a Fender amp you’d expect as much), but even so, there are plenty of other tones available, such as Marshall, Orange, Hiwatt, and Vox for fans of British rock tones.

To stop you from getting lost, it has a useful ‘setlist’ option for organizing presets in themed groups.

It has a ton of other digital niceties too: a crisp full-color display, an in-built tuner, and even a 60-second looper. It being a modern digital amp, it has wifi connectivity letting you search and download even more sounds directly into the amp.

The amp will also update automatically and there are effects loop and XLR line-out sockets on the back.

The GTX 100’s little brother, the LT-25 is more for the beginner, student, or budget-minded guitarist.

Despite its diminutive size, it still packs a fair amount of goodies with 30 presets that cover a range of styles, all accessible via its simple user interface.

It’s an ideal bedroom amp too, with a stereo headphone output for silent practice. 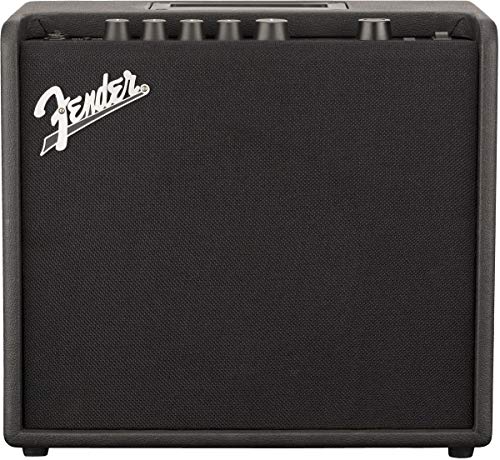 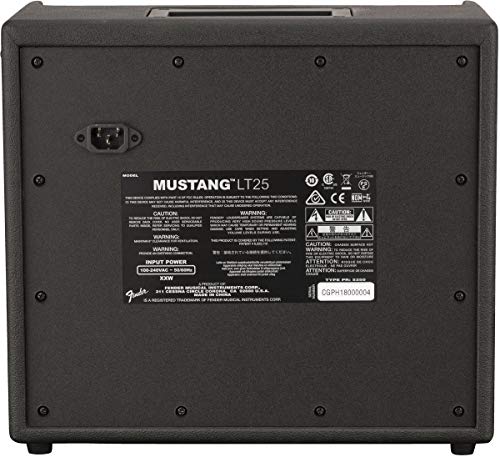 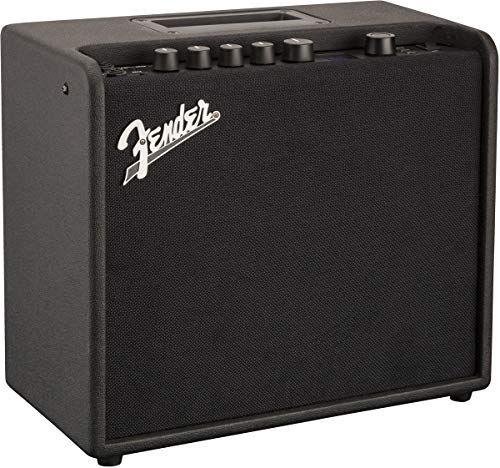 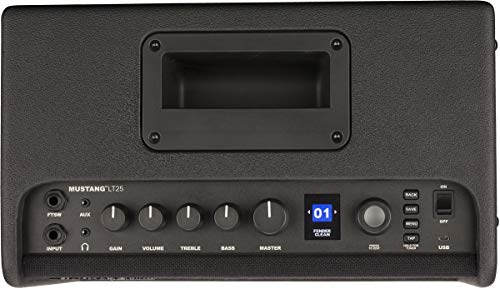 Over the years, many guitarists have favored the tone you get from playing through two amps simultaneously, especially in the ’80s. However, its not only expensive to purchase two amps, it’s cumbersome to carry around 2 cabinets and there are various issues with blending the two.

The THR100HD solves this in an incredibly compact, tiny package. It has two identical amps – amp 1 and amp 2 – each with five amp types (modern, clean, crunch, clean, solid) as well as a switchable boost so you can kick in a boost or an overdrive pedal.

You can switch between amp 1 and 2 in the same way you can in a traditional channel switching amp, but the really cool thing is you can combine the two amps to get that revered sound so many guitarists love.

Included is a footswitch as well as XLR line outputs to let you connect to recording or live sound equipment.

All in all, it’s an expensive bit of kit, but it’s unbelievably versatile and extremely well built.

Check out this video to hear it in action: 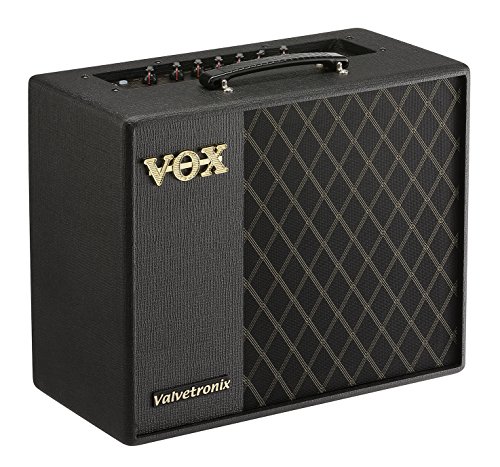 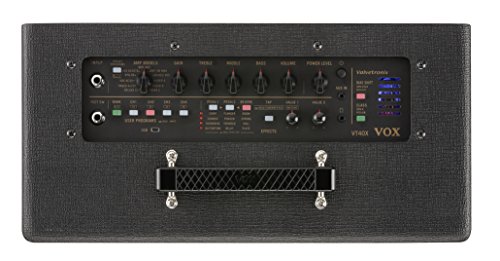 The Vox VT40X has a 10-inch speaker, which brings out high tones, as well as 11 amp models, which can be expanded using ‘Tone Room’ editing software. There is also a USB to allow you to connect to a PC or another device. Many effects are included in this amp, from phaser to distortion to delay and even tremolo.

These effects can be triggered with a footswitch, making it perfect for live performance, and at 40 watts it is more than capable of producing enough sound for a pub or club gig.

The presence of the valve does mean that it requires maintenance, and is slightly more expensive than purely digital products. However, this one is ideal for those who want something that’s ‘real’ but has a few more modern options.

It’s great for those who want more of a hybrid option, and of course for fans of Vox. It’s not ideal for those who are on a budget and want something to try out an array of sounds, as the number of models is quite small. 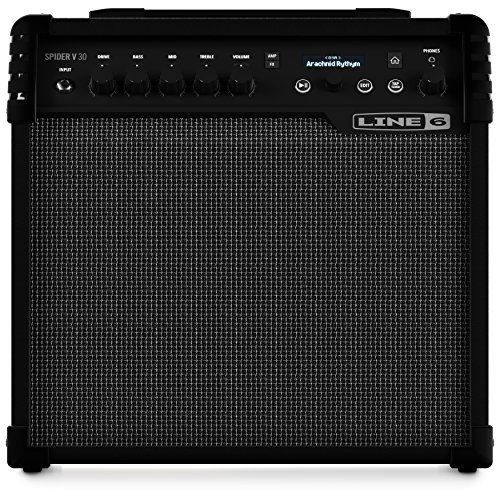 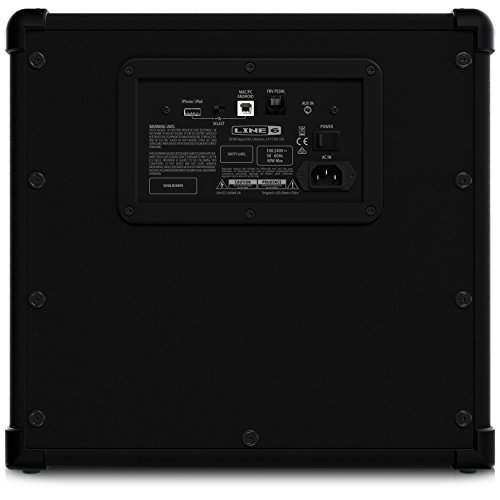 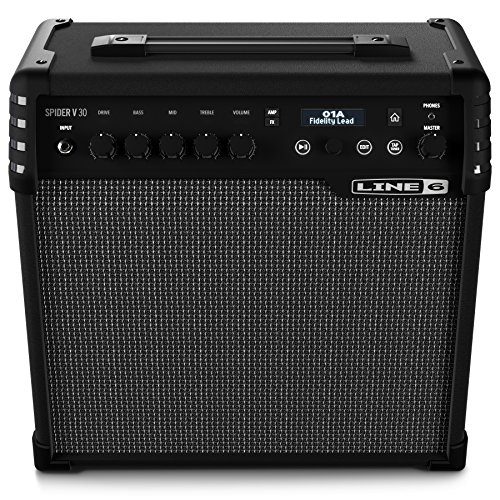 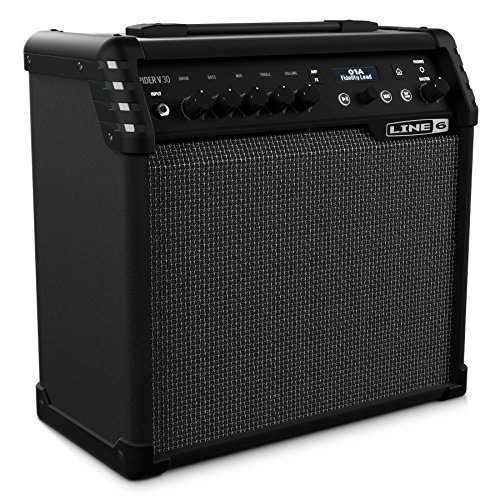 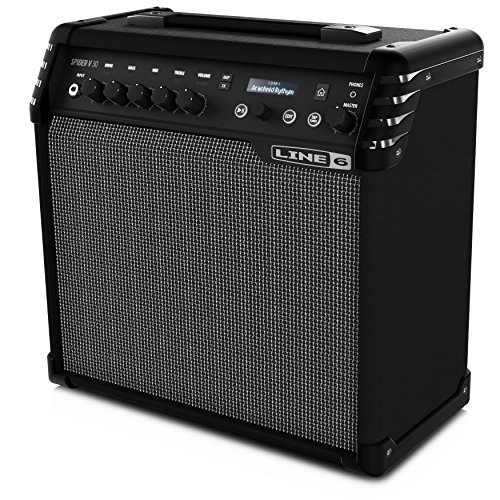 The Spider has a built-in tuner, drum loops, and a metronome, making it fairly versatile. What makes this one so impressive, though, is its massive choice of 200 models. You can really experiment with a variety of sounds. There are also 128 presets, which give you instant access to signature setups.

It has iPhone/iPad connections and is also compatible with a footswitch, and there are XLR direct outputs that make it suitable for further amplification. It’s designed for use with a Line 6 Relay G10T, which allows you to customize and tweak the sounds. However, this is an expensive addition to the amp.

It is also limited to electric and acoustic guitars, as there is no XLR input for microphones and it’s not well suited to bass guitar.

It will suit the creative guitarist who wants access to a vast amount of sounds, the smaller models are perfect for practicing with at home. It might not be suited to those who are more interested in recreating specific, classic tones. 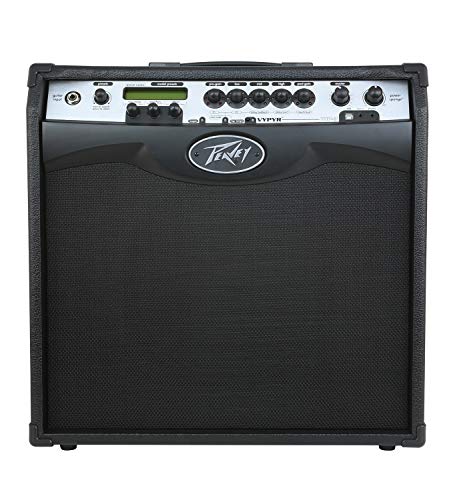 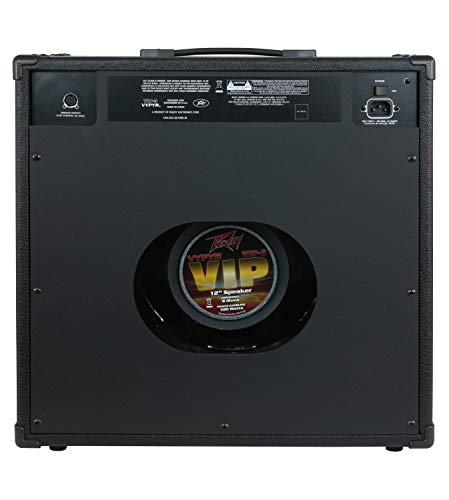 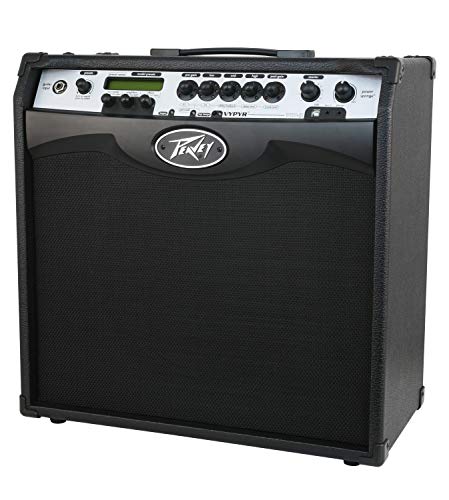 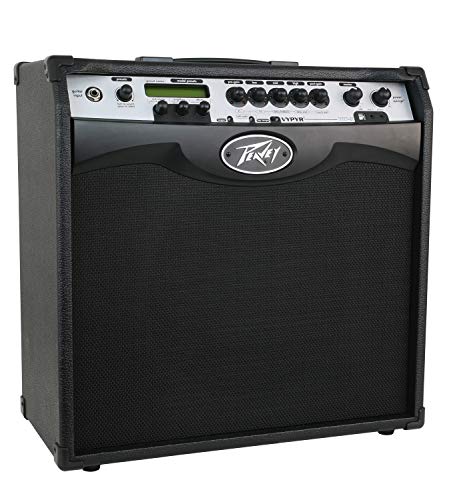 The Peavey Vipyr VIP 3 is a 100W beast which caters for guitar and bass guitar.

It has a 12-inch speaker, which helps to bring out high and mid-tones, as well as 36 amp models to choose between.

As well as these 36 models, there are 400 pre-sets and a built-in tuner and metronome.

This amp even features a built-in looper, which you can operate with a compatible footswitch, so you can have some fun with it when you’re practicing or performing.

This amp is more than capable of some sweet sounds once you’re confident operating it. It might not be as suited to the professional guitarist who is looking exclusively for classic tones without the fuss.

What is a Modeling Amp?

A modeling amp is a combo amplifier that models itself and it’s tone capabilities on the sound of classic guitar amps. On one of these amps, you find presets that mimic the sounds of well known, classic amp tones from the like of Fender, Marshall, and Mesa.

They are the ultimate amp for the 21st century. In contrast to valve and solid-state amps, they do everything digitally through the use of what are known as ‘virtual element’ or ‘digital modeling technology’.

As a result, they can replicate a variety of different amplifier tones (known as ‘amp models’) without any of the challenges that real amps face – such as overheating, excessive weight, etc. – and in many cases, perform almost as well, so in many ways, they’re the best of both worlds.

Many years ago, the thought of accurately emulating the sound of a classic amp was unthinkable. You needed the actual gear to get the tone. Not these days.

The best guitar amps can imitate the response accuracy remarkably well. Rather than the antiquated circuit boards or vacuum tubes that were prone to malfunction, these amps use modern circuitry boards that give you the sounds of your favorite amp at the twist of a dial.

So what are the additional benefits to owning one of these? Let’s take a look…

Because there are so many options, the repertoire at your fingertips becomes instantly more versatile. This is a massive benefit for session or gigging musicians, who may want a variety of tones at their disposal, without having to mess about with on stage with gear.

These amps also act as ‘a gateway amp’: you can use one to work out which amp tone you like the most. Sort of like a taste test, giving you the opportunity to hear what many classic amps sound like without having to invest heavily.

Cost is a big attraction here. They’re often cheaper than solid-state amps, and always less expensive than valve amps. Granted, they don’t quite offer the quality of tone that a real valve amp gives you, but when you consider that you’re getting multiple tones in a relatively small, lightweight box, it’s impossible to argue with the value for money.

If you’re a gigging musician you’ll know all about the weight issue of vintage combo amps. They mostly weigh an absolute ton! These combos weigh significantly less than the real thing. You can expect to find them weighing between 30 and 40 lbs, whereas amps containing tubes typically weigh A LOT more.

Finally, thanks to their modern circuitry, modeling amps tend to be a lot more reliable as there is a lot less to go wrong in them.

First up, as you probably guessed, is the number of amp models. Some products include ninety-plus replications, while others contain as few as six.

If versatility is your aim, you will want to go for something which can model a vast number. If you prefer a fat rock sound, one which has a Marshall option will be best suited to your needs. If you want a brighter tone, the sounds of Fender are more appropriate. Fortunately, most of these products include classic Marshall and Fender sounds.

Many of these guitar amplifiers contain built-in digital effects, from delay and reverb to phasers, flangers and beyond.

These can be really useful for those who want to experiment with weird and wonderful sounds and get creative and experimental with their guitar playing. These built-in effects are usually favored by beginner/intermediate players, rather than professionals, who may prefer to use a combination of individual foot pedals.

If you want to use more than one amp model per gig, getting a product that’s footswitch compatible is a must. These footswitches allow you to stamp your way through settings, in times when it would be impractical to fiddle with knobs. If you sing or would like to use it with a singer, it’s important to look for one with an XLR input to cater for this.

Some amps have an effects loop. This is an input/output that allows you to insert effects in between the preamp stage of amplification and the power section of the amp. It sometimes works better to fit your effects after the tone has been shaped, i.e., after the pre-amp stage. Having this option gives you greater control over your sound, and allows you to create interesting sonic landscapes.

As these are modern devices, they often contain USB inputs. They can be used to hook up software to edit your sound, or even in combination with your recording software. They’re beneficial to anybody who wants to alter their preset sounds.

You can find some amplifiers which include real valves. With these, you get that natural controllability over dynamics and tone that valve enthusiasts love. These amps are on the pricier side and need a bit of maintenance as the valves need to be maintained just like on a standard valve amp.

Our top pick is the Fender Mustang GTX 100. This offers a feast of 200 onboard presets (including 39 amp models, 33 cabs and 73 effects) through it’s quality 100-watt celestion speaker.

Looking for a budget modeling amp? Then check out the LT-25. This 25-watt amp has a collection of 30 presets and is ideal for beginners, students or if want to keep spend to a minimum.

If you want the best that money can buy, then check out the Yamaha THR100HD: a dual-channel modeling amp in a vintage, compact and lightweight design. It’s unbelievably versatile and extremely well built