The octave was the first standalone effects pedals ever made. Whether it’s to give you a fuller tone (by doubling up on notes), beefing up a solo, or just helping you play octaves more efficiently, they have many applications.

In this article explain in-depth how they’re used, and recommend our favorite products available today.

If you’re in a rush, here’s what we review further down the article.

At a Glance: Our Choice of the Best Octave Pedals For Guitar on the Market

Here’s what we’ll cover in this article. Jump to an area of interest, or better read the whole thing. By the end of it you’ll know exactly which is best suited to you.

What is the ‘Octave Effect’?

Octaves are known as ‘pitch-modulation’ effects pedals. They work by copying the input signal from your guitar and shifting the pitch up or down by a full octave (doubling or halving it). The output signal is then heard as both the original note plus the pitch-shifted note, or just the shifted note on its own. For example, if you were to play the two open E-strings on a guitar at the same time, you would have the same result as playing the E6 open with an octave pedal set to -2 octaves.

The track ‘Seven Nation Army’ is probably the best demonstration of the effect in the history of popular music. As a two piece-band, an octave pedal was the perfect way to bring in a bassline to round out their sound. The result is a warm, almost lo-fi production that has enduring popularity and as easy guitar riffs go, it’s right up there. Also take a listen to ‘Sledgehammer’ by Peter Gabriel, for an example of one being used with a bass guitar to brighten up the tone.

Guitarists without a good grasp of music theory will benefit from octave pedals as you won’t have to spend as much time hunting around on your fretboard for the right note if you’re looking to play two octaves at once – this can also help to accommodate those who struggle with the fretting of certain combinations of notes.

You may also wish to achieve a ‘fuller’ tone – and adding an octave up and/or down can be a good way to do this. Doubling up on notes in this way is an effective way to improve sections of music which sound underdeveloped or too quiet, similar to the ‘Wall of Sound’ recording technique developed by Phil Spector. This may be done for a whole song, or intermittently depending on what other instrumentation occurs.

Another way you can use them is to play at a much higher or lower frequency range than usual and remove the original pitch. This will be particularly beneficial if you are performing music which was originally written for instruments with a much broader range of pitches than a guitar.

Using one in a solo will also be a convenient way to fill the sudden emptiness that comes from having the rest of the band suddenly go much quieter. In this way is a very subtle way to avoid a massive dip in the sound levels that may leave a solo feeling underwhelming in comparison to the rest of a track.

They’re also prone to adding a synth-like tone to your guitar, and this can be used intentionally to create a smooth and full sound or even to add some variety without going overboard. They will often have extra controls for additional purposes such as EQ and dry/wet ratios.

Finally, if you’re a guitarist who plays in a band with a more unusual lineup, you may find that an octave pedal is the only way you can reach the same pitches without sacrificing the use of half of your frets. Furthermore, having the ability to play any note across a range of octaves simultaneously easily can help your sound to come through when you’re playing alongside instruments which are just naturally more dominant or ensembles.

There are two main types: analog and digital. Analog octaves were the ‘original’ effect  – good as they are; they did tend to introduce a certain level of ‘fuzz’ and inaccuracy to the result. Those which rely on analog circuitry can be prohibitively expensive too.

If you need something that can handle chords or even just double-stops, then a polyphonic octave pedal is going to be the only way forward. On the other hand, if you’re only using one for single-note sequences, then there’s no need to splash out on a pedal that does more than you need it to. Bass guitar players will be able to get more out of a monophonic one, as well as those guitarists who are looking to fill in for a bass player if one isn’t available.

These days you will find that most of these products will let you choose between shifting between one or more octaves. This is a very basic consideration, and knowing in advance how far you’ll need to move the frequency of a note by will make this choice much easier.

Many will allow you to set a dry/wet ratio (how much of the processed signal is heard alongside the original signal). Having this option ensures that you can hear both the original note and the one which is shifted by an octave at the right levels giving you the ability to emphasize one of them at any particular moment. An octave pedal without this control may only output the pitch-shifted note and not the original one, so be sure that this is good enough for your purposes if that is the case before you buy.

Although not a ‘feature’ as such, it is crucial that you look carefully at how well the pedal tracks your playing. If the tracking is poor, then it won’t be suitable for anything other than low tempo music played through a clean channel. The better products can handle faster sequences of music and correctly gauge what the output should be.

Latency is similar but refers to what delay there is between playing a note and the output signal. If latency is very poor, it can make it difficult to keep in time and may compound any existing issues with tracking inaccuracies. This should be your priority, as no amount of additional features will improve a poorly made product.

The inclusion of gain/overdrive controls allows for the octave effect to be combined with the characteristic ‘roar’ that tube amplifiers have when pushed hard. This is good because it adds another layer of authenticity to the post-processed signal, making it sounds less synthetic and also helps to disguise any issues in tracking by muddying the overall sound.

Finally, If you’re the type of musician who insists on absolute control, then finding one with either a built-in expression pedal or an input jack for one is essential. 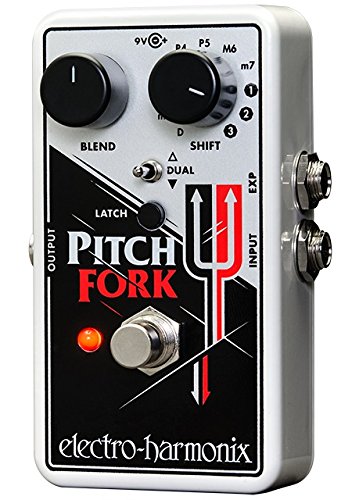 The Electro Harmonix Pitch Fork has a very high three-octave range in both directions and is unusual in the sense that it can be used at the same time, making it very good for those who are looking to create a chorus style effect. It also has an expression pedal jack with two different modes, allowing for a lot of creativity. Getting the hang of these can be quite difficult, and pushing the settings past a certain point will result in the tone being altered in a noticeable way. You can use it as a standard octave pedal as well, but this packs much more utility, although you’ll also need to purchase a separate expression pedal to make the most of it. 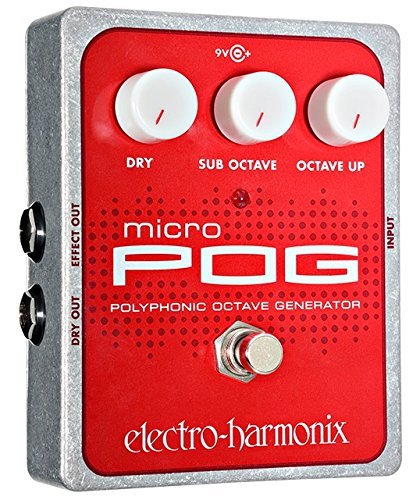 A very straight forward polyphonic pedal, allowing for the simultaneous adding of an octave up and down at different levels. This feature, along with a stereo dry/wet output, makes it a very versatile octave pedal which is only undercut by the fact that you cannot go beyond one octave in either direction. 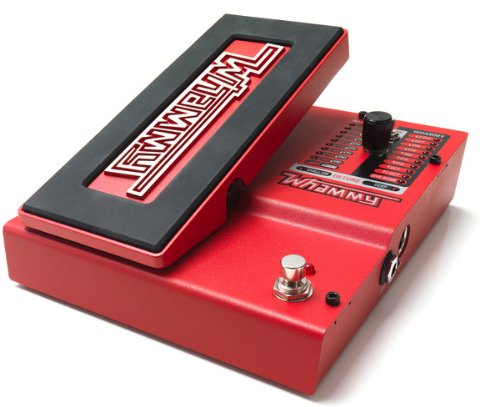 Another polyphonic pitch-shifter rather than a pure octave-pedal. A rather unusual feature is the option to switch to monophonic mode, although whether this would be of any use for most guitarists beyond the sheer novelty of it will be very subjective. The built in-expression pedal means you can use it as a whammy bar, and it has a helpful series of lights to show exactly how far you’ve shifted the pitch by. Pitch shifting in either the whammy or harmonizing mode can be done both up and down. This does make it larger than most, and there are no options for controlling the blend. 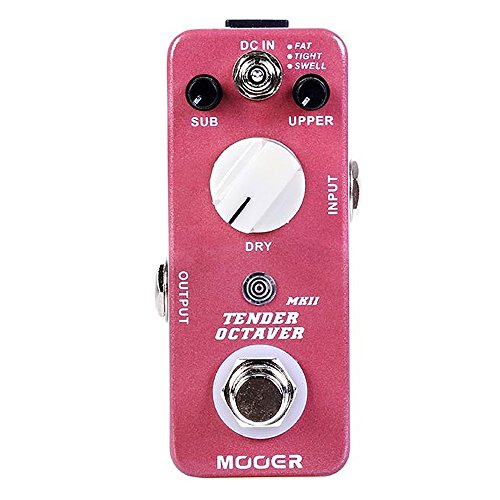 The Mooer Tender Octaver is another polyphonic product. It’s three different EQ modes adds a lot of versatility to a product which would otherwise be very basic due to its single up and down octaves – although a dial can control these, along with a dry/wet blend. Rather than relying on pitch range as a selling point, the best thing about this one is that you have a lot of control over the character of the sound. It’s also one of the thinnest octave pedals around, making it great for traveling musicians or those who have a lot of gear already. Online reviews suggest that quality control may be an issue, with several units being returned due to unwanted noise. 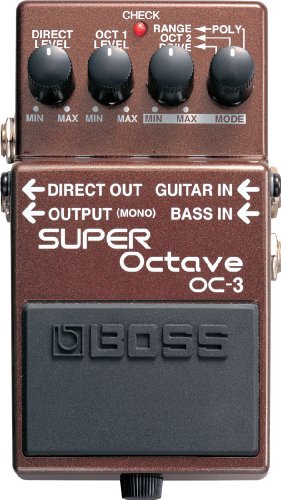 Boss OC-3 Super Octave is sub-only polyphonic, giving it a somewhat reduced application. However, if you only need to add a bassline, this is an excellent choice due to the wide range of features packed in. You can have up to three notes playing at once, the original, one down and two down. It includes distortion and has separate inputs for guitars and basses. There is also an option to select what range of notes are processed by the polyphonic octaver, allowing for some to be skipped. 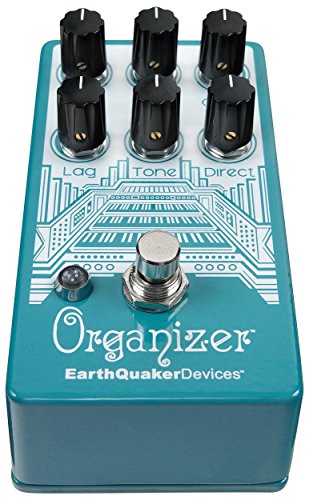 This polyphonic octave pedal is touted as one which can accommodate a huge range of instruments, including vocals, which makes it very useful for those who will be recording tracks that will require many octave effects throughout. It also has additional chorus settings, delay, and adjustable high-cut. 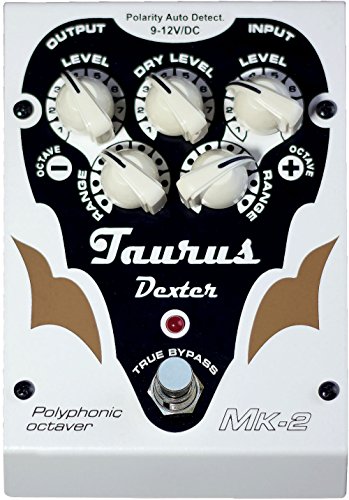 The Taurus Dexter is polyphonic with both up and down transposition to 1 level in either direction, controlled by separate dials and with an additional gain dial, and a range control which limits the highest frequencies which will be affected.

Since we’ve included a few products here which are not pure octave pedals but are technically transposition pedals with multiple increments, the first decision will be as to whether you need these extra options. If you like having as much flexibility as possible, it’s hard to go wrong with the Digitech Whammy.

On the other hand, if you want something that will cost the bare minimum while getting the job done, the Mooer Tender is a great way to go, and the slim profile makes it ideal for traveling or fitting onto crowded pedalboards.

The Boss OC-3 Super Octave brings insane levels of bass, and this is fantastic for solo guitarists who don’t have a bassist to work with, but it’s also built from the ground up to work with bass guitars as well if you really need to shake the foundations. It’s also the only one with a stereo output, so it’ll be excellent for more complex speaker setups.

If you need one which has multiple effects built in, then the Earthquake Devices Organizer is a great option, and it will help save you from needing to chain additional effects together – although bear in mind that they cannot be used without also triggering the octaver effects.

Ged is Founder and Editor-in-chief at Zing Instruments. He's a guitarist for London based gypsy jazz band 'Django Mango' and a lover of all things music. When he's not ripping up and down the fretboard, he's tinkering with his '79 Campervan.