19 Best Party Songs to Shake Your Stuff To 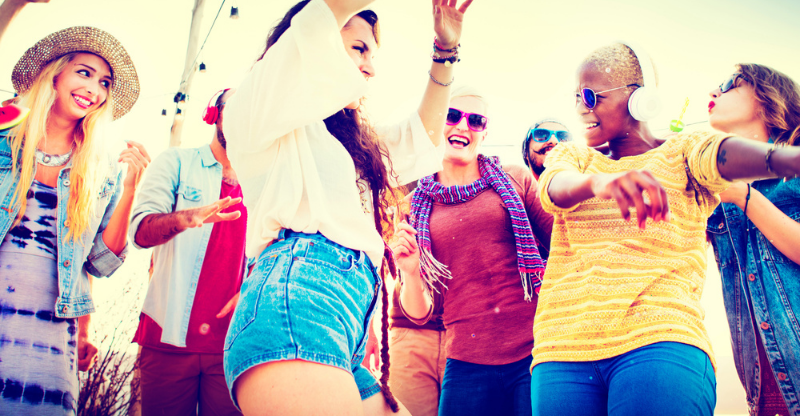 There’s nothing like some decent tunes to get the party started. So here are some of the best party songs to help you get down and boogie.

‘Uptown Funk’ is a confident, fun-filled track about being successful and having fun dancing and partying. It’s interesting in that it was one of two songs released in 2014 that referenced Michelle Pfeiffer—the other being Vance Joy’s ‘Riptide’—at a time when Pfeiffer was not appearing in any hit films.

This song was inspired by Shakira’s insistence that her band members needed to watch her hips to see how a song’s moves needed to be arranged. It was based on Wyclef Jean’s song ‘Dance Like This,’ as well as the track ‘Amores Como el Nuestro’ by Jerry Rivera.

Here’s a song about staying up all night partying and hoping to find passion. Nile Rodgers played guitar for the track while Pharrell Williams provided vocals.

Related: This one is a popular choice for feel good soundtracks.

This song finds Flo Rida mesmerized by a woman’s dance moves. It makes heavy use of product placement and was used in the soundtrack for the film Step Up 2 The Streets in 2008.

‘Party Rock Anthem’ is a club staple that focuses on shuffling and dancing the night away at a party. It was LMFAO’s only hit and had Motown influences, as member Redfoo was the son of Motown’s founder.

Rihanna’s uplifting hit about finding love against all odds was a very popular party and dance track after its release. It was the singer’s sixth Number One hit in Britain. Each song that hit Number One was released within a five-year period, which is a record that only Rihanna has ever held in the female solo artist category.

Single Ladies (Put a Ring on It) – Beyoncé

Beyoncé encourages women to leave their boyfriends if they don’t propose in this iconic girl-power hit. The song isn’t likely biographical, as the singer didn’t even want a ring during her own engagement.

This is mostly a simple track encouraging listeners to dance. The lyrics were meant to be secondary to the rhythm. It samples from The Kinks and James Brown.

Justin Timberlake sings of seductive dancing with this track. Timberlake has said that it has a James Brown feel to it.

Dance Monkey – Tones and I

Tones and I was inspired to write this song while busking, as she felt like a trained monkey trying to entertain people. The lyrics make more sense if you replace the word “dance” with “sing.”

MC Hammer sings of an untouchable beat in this dance hit. The music is based off of Rick James’ ‘Super Freak.’

I Wanna Dance with Somebody (Who Loves Me) – Whitney Houston

This song finds Whitney Houston feeling hopeful about finding someone to love while out dancing. It was the lead single from Houston’s second album and a huge success.

A teenage girl wows everyone on the dance floor in ABBA’s classic track. It was an international success and became the world’s first Europop disco hit.

This song’s complex lyrics are mostly about hanging out at the club. It references five different rappers throughout.

‘September’ was inspired by a protest on the 21st of September. It’s known for its happy sound that fits in perfectly at parties.

This song about being happy and encouraging it in others was one of the very few pop hits that was composed by one person; Pharrell Williams wrote the entire song in addition to singing it. It was part of the Despicable Me 2 film soundtrack.

Related: This also appears on our playlist of songs about happiness.

Jump Around – House of Pain

This dance-fueled song about jumping was one of the defining hits of the 1990s. The “jumping” theme was popular among hip-hop artists in 1992 when this track was released.

Don’t Stop ’til You Get Enough – Michael Jackson

This classic, which could be about not quitting on love or on life in general, won Michael Jackson his first Grammy Award. The vocals were written to be so high-pitched that Jackson had to be overdubbed in some places for the right effect.

Black Eyed Peas’ sing of having fun, dancing, and partying to forget your woes in this hit. It samples David Guetta’s ‘Love Is Gone.’