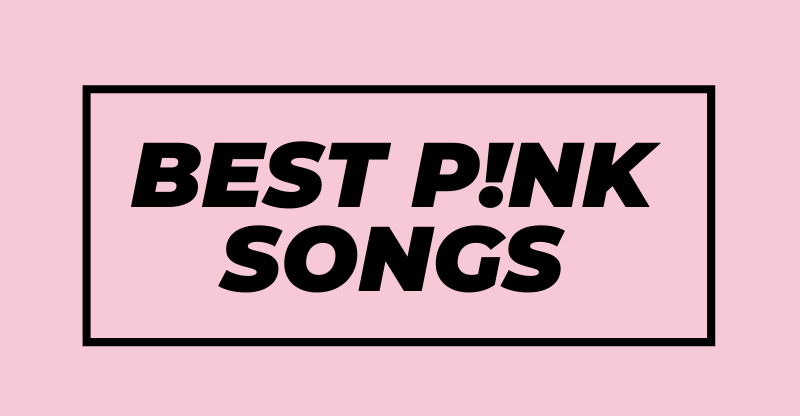 Pink has enjoyed two decades of success and has changed her sound (and her looks) more times than you can shake a stick at. She’s a formidable artist and pop icon, so here’s our list of best Pink songs to help you appreciate her work to date.

Just Give Me a Reason (feat. Nate Ruess)

Pink and Nate Ruess sing this song from the perspective of two lovers who have had a complicated relationship but are trying to make it work. The source of the problems in this relationship is that they each think the other person is acting differently than they usually would. Perhaps there’s a specific reason, or maybe it’s because people change over time, but they both agree that they can fix it if they work toward it.

Related: see songs about staying together.

This song is about how relationships are never perfect. It’s almost guaranteed that someone is going to get hurt. But, just because someone gets hurt doesn’t mean that the relationship has to end. Rather than walking away from it all, you can work to fix the problem and mend a broken heart to make the relationship last a long time. If you’re in the middle of a lover’s quarrel (or battle), give this song a listen. It might do you some good!

Pink wrote this song shortly after she and her husband had marital problems in 2008. They separated amicably, but people started calling her a hypocrite after this song came out. The song was never meant to be serious – she wrote it in a jokey manner, and it was meant to be a fun song about leaving behind an ex and taking all the money. To shut up everyone calling her a hypocrite, her husband appeared in the music video, and it worked.

This song offers a toast to all the “freaks,” whether you’re a self-proclaimed freak or deemed so by society, and encourages everyone to be themselves. The song is meant to be like a party for everyone who doesn’t fit in, and it questions everyone who judges by asking them, “why so serious?” If you’re feeling alone, judged, or out of touch with the rest of the crowd, you can dance away all your insecurities to this song!

Related: see songs about loving yourself.

‘What About Us’ is essentially a protest song directed toward politicians and leaders who seem to make decisions that go against the people. The song questions the empty promises and foiled plans that break the trust of many communities. Since this song came out in 2017, some people assume it has something to do with the United States’ 2016 election, but Pink hasn’t confirmed or denied anything about it. The song is vague enough that anyone can use it to question misguided leadership.

The movies will make you think soulmates seem like they’re always holding hands and skipping through a field of daisies, but Pink takes a more…realistic approach. Sometimes your lover will drive you insane. You might fight, and you might think you hate them, but according to Pink, that’s what true love is! She appreciates her husband’s flaws in this song and shows that nobody has to be perfect to be the right one for you.

LaBelle originally sang ‘Lady Marmalade’ in 1974. In 2001, Pink did a cover of this song with Christina Aguilera, Lil’ Kim, and Mya. The song was plenty spicy by 1974’s standards, but the remake was made spicier with a rap verse about the four “chicks from the Moulin Rouge.” According to the song, they’ve got expensive taste and are independent women who know how to make cash on their own. If you don’t know French, the question being asked is, “Do you want to sleep with me tonight?”

Cover Me in Sunshine

This sweet mother-daughter duet features Pink’s daughter, Willow. The song is about getting through tough times by hoping for a better tomorrow. Today’s problems seem big, but “mountains are just some tiny hills” once you’re able to move past them. The addition of Willow to the song might make you think of the children in the present and future and how you can create a better world for them to grow up in.

This song is all about being independent and unique and conquering the world (or your workplace, school, or what have you) by working hard and being your authentic self. This song was part of the Alice Through the Looking Glass soundtrack, so the lyrics are whimsically decorated with clowns, colorful charades, and magic, but the song’s message is evergreen and will surely give you a boost of confidence when you need it! Like the song says, you’re the only you out there.

Anywhere Away From Here (with Rag’n’Bone Man)

The two singers in this song appear to be singing about a situation involving each other that changed their lives, and not necessarily for the better. Rag’n’Bone Man sings of fearlessness that they had in their youth, while Pink sings of being unhappy about aging and their current situations. The song isn’t specific, but you can assume it’s sung from the perspective of two former lovers who never got it quite right and had to part ways, but now they wish they could’ve made it work.

As Far As I Know

Pink is telling her daughter everything she’s learned about life so far. It’s clear that Pink is still learning since she says “so far,” so she’s doing the best she can for her kid. She promises her that she’ll always be there for her and encourages her daughter to be herself and learn about life as she goes, and to always be “unfiltered and loud,” just like her mom. It’s a sweet song for a mother to sing to her daughter!

This heartbreaking song is based on a poem Pink wrote when she was just nine years old after her parents divorced and her father left. She was heartbroken over her dysfunctional family and wanted everything to go back to the way it was when everything seemed like it was okay, even though it wasn’t. She didn’t record the song until she was twenty-one. It shows that the sorrow of dysfunctional families can stick with a child even into adulthood.

Related: this track appears on our music about family playlist.

Nothing hurts quite like someone promising to be there for you forever, and then one day they’re gone. Pink sings of that pain in this song. She shows her denial that anything could happen to the relationship, saying that she would’ve punched anyone who said that person wouldn’t be in her life anymore. But, now this person is gone, and she’s left with the sadness and loneliness that followed. Still, she says “until we meet again,” showing that there’s still a sliver of hope that maybe forever could still happen.

Related: this appears on our best breakup songs playlist.

I Have Seen The Rain

Pink’s father, James Moore, wrote this song while he served in the Vietnam war. It was the first song Pink sang and performed, and she can pretty much give this song the credit for how she got to where she is today. She and her father would perform the song together at veteran centers, but the first time her father performed in front of a “real” audience was the performance in the linked YouTube video.

Don’t Let Me Get Me

Pink sings of her insecurities in this song and how she sabotages herself sometimes and makes her life harder than it needs to be. Most people can probably relate to the idea that life would be easier if we could just be somebody else! Pink sings of being compared to other celebrities and being told she needs to change who she is to make it in Hollywood, but that’s just not who she is. Even though she wants to be someone else, she still values herself enough not to change everything about herself.

Related: this track appears on our ‘not good enough‘ playlist.