23 Best Recorder Songs That Are Great for Beginners 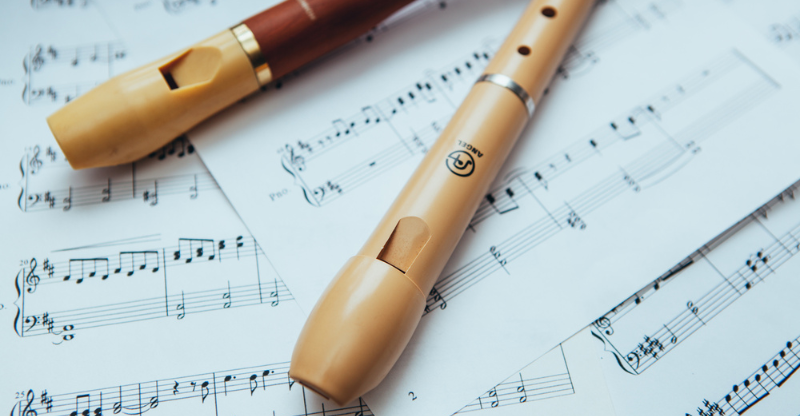 If you’ve decided that the recorder is the musical instrument you want to learn, you’ve made a great choice! Many musicians get their start playing the recorder, as it is simple to learn and can offer you hours of fun.

What are some tunes to get you started on your musical journey? Here are some of the best recorder songs to help you learn to play this entertaining wind instrument.

‘Hot Cross Buns’ may be one of the easiest songs to play on the recorder, as it consists of only three notes played in a simple pattern. The song began as an English street cry for hot cross bun peddlers but transformed into the nursery rhyme we know today.

Happy Birthday to You

This song is for you if you want to learn the whole scale on your recorder or master varied note lengths. You’ll also be ready to play a tune the next time a friend or family member’s birthday comes around. It originates from an 1890s song called ‘Good Morning to All’ used by teachers to greet students.

Aspiring musicians who want to learn a modern children’s song will want to give ‘Baby Shark’ a try. It consists of a few notes repeated throughout the verses, making it an excellent piece for beginners to try on the recorder. The song is based on a rather dark campfire song that Pinkfong then popularized in 2015.

Related: Swim over to our playlist of shark songs.

This classic is loved in countries around the world and is one of the most popular first songs for those learning to play instruments due to its simplicity. Sara Hale published the nursery rhyme in 1830, and Lowel Mason wrote the music. The song was inspired by a girl named Mary who brought her lamb to school.

If you want to learn a simple holiday classic, try ‘Jingle Bells.’ While the song is often used to celebrate the Christmas season, its writer used it to celebrate Thanksgiving Day in the United States. It sounds like a simple track in the abridged version that most people know, but the longer version finds its young male protagonist going on an adventure on his sleigh.

Related: Find more wintery songs on our playlist of songs about the cold.

Anyone learning the recorder who is ready to learn more complex melodies should try this classic. John Newton wrote the hymn after surviving a near-shipwreck and finding faith as a result. If you’ve tried some of the simpler songs on this list, you should be able to give this piece a try.

Related: This song features on our playlist of the top funeral songs.

Since it is higher pitched than other familiar songs, this piece gives you a chance to learn some notes higher up the scale while still keeping a simple tune. The earliest version of the song seems to come from 1852 when it had a different tune from the one known today.

Old MacDonald Had a Farm

This 5-note kids’ favorite is a great song for anyone ready to move beyond a couple of notes on the recorder. The verses are cumulative, with each verse building on the last. It is believed that the song was written for an opera in 1706 before gaining popularity as a folk song in the United States, Ireland, and Britain.

‘Ode to Joy’ is actually a movement from Beethoven’s ‘Ninth Symphony’—the last movement from his last symphony. It was one of the first symphonies to include vocal sections, often referred to as the ‘Choral Symphony.’ If you want to master a classical piece that is loved around the world, this is a relatively simple one to learn.

Here’s an Anglo-American piece that dates back to the French and Indian War. What was meant as a derogatory tune about US troops written by British soldiers became a patriotic theme for Americans when the US began to win the war. It’s a great choice for anyone looking to learn a US-centric patriotic piece on the recorder.

This Little Light of Mine

This is an uplifting song about the importance of unifying with others during hard times and letting your goodness shine. If you want to learn something uplifting yet simple on your recorder, this is the track for you. It’s suitable for audiences young and old.

Related: Shed some light on our list of the best light songs.

As popular as this piece is, no one is sure who composed it, but it’s possible that it was created by Henry VIII. The narrator loves his romantic partner, but it seems she isn’t in love with him anymore. He pleads with her to love him. It’s a simple traditional tune that your listeners will enjoy hearing once you learn the notes on your recorder.

If you want to learn a truly traditional and religious Christmas song on your recorder, this lovely piece is a simple and enjoyable choice. It was written in Austria in 1818 when holiday music was required after a church organ broke. ‘Silent Night’ has been translated into at least 300 languages as one of the world’s most popular Christmas carols.

Related: Shh! Listen to these songs about being quiet.

When the Saints Go Marching In

Louis Armstrong popularized this essential jazz piece, which started as a traditional Black spiritual. Its apocalyptic imagery is used to create a joyful depiction of freedom from bondage. It’s an instantly recognizable classic perfect for jazz fans who want to try something exciting on the recorder.

Related: If you’re considering playing the violin, here are some easy violin songs for beginners.

We Wish You a Merry Christmas

Here’s a joyous Christmas track that’s perfect to learn for the holidays. This traditional English carol finds its protagonists wishing others “a Merry Christmas and a Happy New Year.” While its origins are unknown, the song is believed to date back to the 16th Century.

This children’s favorite is so simple and classic that it is often one of the first tracks that new musicians try out. It’s a great choice for the recorder since it has a repetitive melody made up of a few notes. Try it out the next time the night sky fills you with wonder.

Related: This song is on our list of beginner piano songs.

This track is popular in its French version and English translation, especially among young children. The song is one of the most popular recorder tunes for learners. The lyrics are about “Brother John,” who is sleeping through the morning’s ringing bells.

Listeners learn of a monkey chasing a weasel in this traditional piece. It’s popular in the United States as well as England. If you’ve ever heard its joyous tune, you might be able to see how easy it is to learn as a hopeful new recorder player.

Here’s a lullaby that was originally known as ‘Hush-a-Bye Baby.’ It’s believed to be the first poem written in the United States. The song teaches a harsh lesson about being cautious, but it’s a fun and simple tune to learn if you want to try a lullaby on your instrument.

Related: Head over to our list of the best songs with baby in the lyrics.

This early Western ballad tells a darkly humorous tale about a loved one’s death. Several notable performers have covered it, including Bobby Darin and Neil Young. Its simple tune is a great choice for the recorder if you are in the mood for a Western piece.

London Bridge is Falling Down

Listeners learn of a monkey chasing a weasel in this traditional piece. It’s popular in the United States as well as England. If you’ve ever heard its joyous tune, you might be able to see how easy it is to learn as a hopeful new recorder player. Fergie refers to it in ‘London Bridge.’

Related: Check out some more songs with London in the title.

My Heart Will Go On

Titanic fans will be happy to learn that this fan favorite consists of only five notes. This makes it a great choice for anyone who wants to learn it on the recorder. The song was written specifically for the film by James Horner, a popular film composer who died in a plane crash in 2015.

Related: Find this song on our list of songs using figurative language.

The protagonist of this track is trying to reach his true love at Scarborough Fair. Simon & Garfunkel popularized it with their 1966 version. This song can impress your friends and family even though its easy melody is great for beginning musicians.