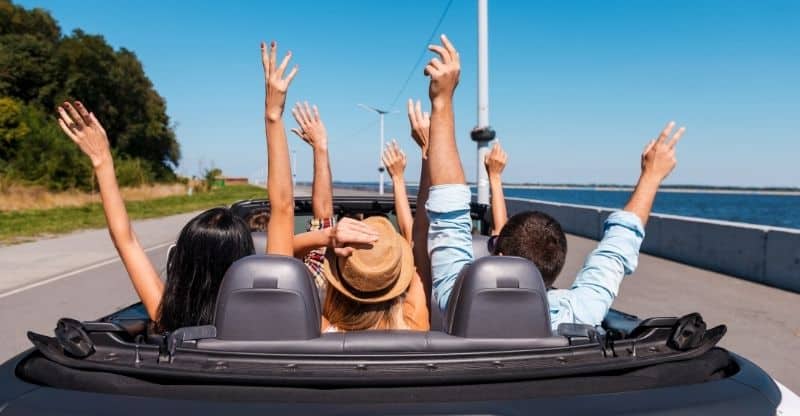 Road trips can be a total blast, but you’re going to need a decent soundtrack.

Ok, there’s something about the Red Hot Chili Peppers vibe that makes for great road trip music (that West Coast chilled vibe, no doubt.) There are countless songs to choose from, but this one is just too good to omit as it’s actually called ‘Road Trippin’. Told ya this was gonna be good :p

L.A. Woman is one of the classic driving songs. The bass line, the build-up, the breakdown, that organ solo. It’s like it’s been engineered in a lab to drive to. To seal the deal, it has references to driving with risque lines such as, “driving down your freeway.”

This has possibly been overplayed, cropping up just about everywhere from movies to TV adverts. It’s worth ignoring all that stuff, as it’s a really great road trip song. If you’re driving through Alabama, then it’s a must!

Born to be Wild – Steppenwolf

No list of classic road trip songs would be complete without ‘Born to be Wild’ from Steppenwolf. The song featured in the ’60s cult movie Easy Rider and became an instant hit. It has direct references to engines and cars (“get your motor running”) and celebrates the search for freedom and adventure, making it the perfect song.

This Iggy Pop classic conjures up images of riding the roads and freeways at night (“down the city’s backsides”) looking for fun. At the time of writing this, Pop and co-writer/producer David Bowie led a totally wild lifestyle of drink, drugs, and late nights.

If you’re on a road trip, you’ll no doubt end up staying at a hotel or two. Well, you better hope you don’t chance upon ‘Hotel California’, where “you can check out, but never leave.” This is one of the most famous American rock songs ever made, and it’s humanly impossible not to like it. Even a little bit.

Truckin’ in road trip music par excellence! First, it wound amazing coming through a car speaker system. Secondly, the lyrics are about making the most of life (“you’ve got to play your hand, sometimes your cards ain’t worth a dime if you don’t lay ’em down.” Pretty deep, huh.)

There’s also this line, “lately it occurs to me what a long, strange trip it’s been” which might be relevant, depending on how the road trip is going.

While we’re discussing artists that sound great on the road, we have to mention Paul Simon. There’s something about his slightly wistful voice that works perfectly as your eyes glance across the countryside and you wonder what could have been.

When you hit a bit of sun, open the windows, flip the convertible, wind the sunroof, and stick this one on. It’s a feel-good number, which ironically has somewhat dark origins. We tell the story in our songs with girl in the title article where the song is also featured.

‘American Pie’ is an epic piece of popular music and makes various nods to cultural events of the day. The “day the music died” is thought to be a reference when Buddy Holly, Ritchie Valens, and The Big Bopper died in a plane crash in 1959. It’s also thought the “jester” who “sang for the king and queen, in a coat he borrowed from James Dean” is about Bob Dylan.

Here’s a classic going home song that’s another foot-tapper. Ok, I know road trips aren’t about going home (usually the opposite) but you gotta go home at some point. Also, it’s great if you’re driving down country roads, so long as you’re not stuck behind a tractor.

From the opening bar of this song (“well, we know where we’re going, but we don’t know, where we been”) you know the next three minutes are going to be fun. Good road trip songs don’t come much better than this. Just make sure you’re not literally on a road to nowhere :-0

In an interview with the Boss, he said “this is a song about two people trying to find their way home.” There’s something about being on the move that’s really liberating, a bit like you’re on the run.

Route 66 is arguably the most famous road in the United States. It was the primary route for people migrating west too (especially during the Dust Bowl of the 1930s). This Chuck Berry also put it on the musical map, alongside countless covers including a rather good one by the Rolling Stones.

Going up the Country – Canned Heat

With its uptempo beat, that flute, and the lyrics about getting out of the city (“I’m gonna leave the city, gotta get away”), it’s a fantastic choice and makes this the perfect road trip playlist (there, I said it.)

Canned Heat famously played this song at the Woodstock festival in ’69, but the band’s future was cut short when lead singer Alan Wilson tragically took his own life in 1970 (followed soon after by Jimi Hendrix, Janis Joplin, and Jim Morrison. What a bummer).

‘On the Road Again’ is one of the best road trip songs. The majority of songs are about going home, but this is the opposite. It’s about seeking adventure, seeking the unknown, and being on the move “like a band of gypsies”. He confesses “the life I love is makin’ music with my friends”. This will make you wish your road trip would never end.

As you’ve probably realized, songs with a great bassline do well as driving songs. The way the bass just abruptly starts this song is marvelous, and then the bass just grooves along beautifully while Stevie Nicks laments about her relationship with Lindsay Buckingham (usual faire for Fleetwood Mac).

By the way, this song gets a mention in our dream songs compilation.

I Drove All Night – Roy Orbison

A late gem from Orbison’s distinguished career. With ELO’s Jeff Lynne on the controls (who does a fine job), the song has a superb driving rhythm and vocals to die for. Who can resist a touch of the Big-O? I know not one.

Drive My Car – The Beatles

Any self-respecting driving playlist needs some Beatles. You’re spoilt for choice really, but as we’re talking cars, then ‘Drive My Car’ is as good as any. McCartney was always a cut above the rest with his bass playing in The Beatles, and here is a prime example. Others you could include are ‘Two of Us’ or ‘The Long and Winding Road.’

In songwriting, the road is often used as a metaphor for life. Your life, like a road, is long (you hope) and rarely goes in a straight line. It goes left, right, up, down, and often takes you over windy, bumpy terrain.

Heroes is one of Bowie’s best songs from his period living in Berlin. The synths, rhythm, and lyrics about being a hero “just for one day” are very apt as you cruise down the highway on your road trip adventure.

We feature this on our heroes playlist, which has a fine collection of songs worthy of any superhero.