Hang on Tight to the 23 Best Rodeo Songs 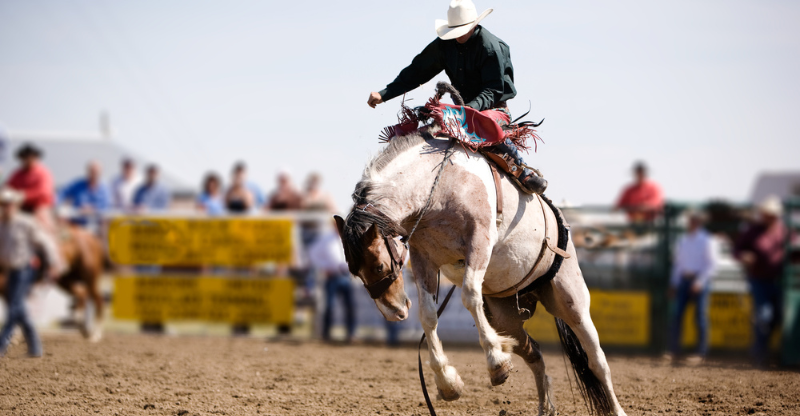 The rodeo is a tough way to make a living. It’s often not something cowboys necessarily choose but are born to do.

Rodeo culture runs deep in country music, with hit songs and albums throughout the ’60s and ’70s into contemporary times describing the rough and tumble nature of the rodeo circuit.

From Garth Brooks and Glen Campbell to Vince Gill and Cody Johnson, here is a stirring and adventurous list of the best rodeo songs.

When you first start listening to Chris LeDoux’s hit song ‘This Cowboy’s Hat,’ it sounds like it was written for his favorite fashion accessory. But as the song continues, LeDoux tackles the important subject of legacy prevalent in both country music and cowboy culture. The singer describes his run-in with a group of bikers who try to steal his cowboy hat. He’s willing to fight them over it because, the listener learns, his late father gifted it to him before he passed away.

Related: Saddle up and head over to our playlist of songs with cowboy in the title.

A cowboy through and through, country icon George Strait sings about the harsh life of a rodeo star in ‘I Can Still Make Cheyenne.’ Focusing on his troubled romantic relationship as he travels, the moving lyrics highlight the chaotic lifestyle the rodeo brings for all cowboys who are dedicated to it. Because of it, many of their personal relationships suffer.

Much Too Young (To Feel This Damn Old) – Garth Brooks

“Worn-out tape of Chris LeDoux.’ Not only did Garth Brooks score his first hit song with ‘Much Too Young (To Feel This Damn Old),’ but a single lyric from the tune revived the fizzled-out career of cowboy-turned-country-singer Chris LeDoux. Like several other of Brook’s hits, he highlights the tough life the rodeo circuit brings for cowboys who try their hand at the dangerous sport.

Reba McEntire lends her vocals to Cody Johnson’s hit dedicated to his first love. Both country singers started in the rodeo, with Johnson riding broncos and McEntire performing her first gigs as pre-rodeo entertainment. Johnson focuses on the push-and-pull a cowboy feels even after he tries to move on from the culture because the rodeo is so ingrained in the cowboy way of life.

The Rodeo Song – Garry Lee and the Showdown

A bit different than traditional country songs, Canadian band Garry Lee and the Showdown tackle their vision of a wild rodeo event with ‘The Rodeo Song.’ Released in the early ’80s, it’s their most popular tune. A big reason for its notorious grassroots rise is its unconventional use of profanity in the lyrics.

Cowboys often lead solitary lives as they look for work and ride bucking broncos at rodeo events across the country. Willie Nelson and Waylon Jennings sing about this wayfaring lifestyle with their hit song ‘Mamas Don’t Let Your Babies Grow Up to Be Cowboys.’ The title warns new mothers that if their son embraces the cowboy lifestyle, he may never settle down or find true love.

Related: Keep it classic with these old country music songs.

“We fight, and we fall. But we keep holding on.” Kane Brown takes on the power of love with ‘Like a Rodeo.’ Singing about his partner’s dangerous ways and intoxicating rush, he compares her to the tumultuous yet addicting nature of the rodeo.

Related: Don’t say we didn’t warn you about the best danger songs!

Country songwriters often compare their trucks and horses to their true loves (cowgirls know why they should take these comparisons as compliments). Brad Paisley takes things a step further and compares an impending breakup to getting ‘Bucked Off,’ or thrown from your bucking bronco while trying to stay on for the full 8 seconds at the rodeo.

“Runnin’ hard for the buckle and a little bit of green.” Full of rodeo jargon like “bull hand” and classic country song references like “Amarillo by Morning,” Luke Kaufman brilliantly encapsulates the highs and lows that come with trying to win the “buckle” and stick some “money in the bank.”

One of Glen Campbell’s biggest hits is his award-winning single ‘Rhinestone Cowboy.’ The lyrics paint the picture of a lonesome, struggling cowboy who’s seen it all but still perseveres. When Campbell heard a demo of the track, he deeply related to it. In 1984, the film Rhinestone debuted, which drew heavily from the hit song. Dolly Parton and Sylvester Stallone starred in it.

Related: This song features on our list of songs with a career in the title.

In 1965, country music was still heavily influenced by the untamed, wild nature of both western music and the western landscape in America. Because of this, the genre’s music was still referred to as “country and western.” Johnny Cash’s track ‘Rodeo Hand’ is a classic western song about an untamed cowboy riding into an unsuspecting town.

One of Garth Brook’s most popular songs of all time is his roaring take on the darker side of the rodeo industry. Performed with the same amount of grit and twang rodeo’s best riders possess, he tells the story of a heartbroken woman who knows her man will always choose the rodeo over her. Even though she loves him, she knows his only true love is the “bulls and blood, dust and mud,” and “the roar of a Sunday crowd.”

Related: If your cowboy is always on the road, you’ll want to hear the best songs about a broken heart.

Cowgirls finally have their moment in the sun with this country duo’s 2007 single ‘Cowgirls Don’t Cry.’ With the same fearless heart and stubborn determination cowboys have, Brooks & Dunn tells the coming-of-age story of a young girl whose father gives her a horse and teaches her important life lessons as she learns to ride.

Related: Check out these songs with cry in the title when you feel blue.

Michael Burton wrote this ’75 classic country western tune, and Suzy Bogguss released her own version in 1989. The tale follows a cowboy traveling across the desert, experiencing the freedom and happiness that only his horse and an open trail can provide. Despite his fulfillment with this rough way of life, the song mentions people who come across him and ask why he thinks being a cowboy is any way to live. His answer to naysayers is, “They’ve never seen the northern lights” or “spring at the Great Divide.”

Written in the style of a western epic, Marty Robbins penned this adventurous tune while traveling on a long road trip with his family. The tune has a bit of everything, including a wild romance, a gripping duel, and the dire fate of El Paso’s daring, devil-may-care cowboy protagonist.

Related: Listen to this song on our playlist of classic ballads.

The Rodeo’s Over – Corb Lund

Songwriter Corb Lund has deep ties to the cowboy lifestyle, with generations of his family working the land, riding horseback, and competing in the rodeo. He’s very connected to his history and often writes about it in his tunes. With ‘The Rodeo’s Over,’ he poetically details the end of a rodeo cowboy’s ride. In true western fashion, though, the cowboy spirit never really dies. Instead, he always goes “further out west” and says to his loved ones, “I’ll meet you out there in the vastness somewhere.”

Released after his breakout hit ‘Old Town Road,’ independent rapper Lil Nas X sticks to his tried-and-true country-rap formula with ‘Rodeo’ featuring Cardi B. In the song, the two musicians rap about how they are afraid the other will suddenly leave them, treating their romance like a rodeo where at the drop of a hat, they could be outdone, and someone else could take their place.

Much like country musician Cody Johnson, Chancey Williams is one of few artists with rodeo experience to back up his country songs. ‘Rodeo Cold Beer’ finds Williams in his element, singing wistfully about his days as a bronco rider. He had a hand in co-writing the autobiographical track alongside industry songwriter Trent Willmon.

What the Cowgirls Do – Vince Gill

Sporting lead guitar licks and hopelessly romantic lyrics by Vince Gill himself, ‘What the Cowgirls Do’ tells the story of the wild women who have no trouble keeping up pace with their cowboys and have a little fun riding faster and loving harder than they do. The tune is a love letter to cowgirls across America, with Gill singing, “They’re gonna drive my little heart insane.”

In an unapologetic cowboy anthem, Jerry Jeff Walker sings about “bordering on the insane” when you lead the life of a ‘Rodeo Cowboy.’ His lyrics are an honest, raw look into the rodeo life instead of an often romanticized version found in mainstream country music. He zeroes in on the toll the rodeo takes on one’s body with references to heavy medication used to “kill the pain” after a difficult ride.

Everyday is a Rodeo – Dustin Craig

Hailing from small-town Tennessee, bull rider Dustin Craig wrote ‘Everyday is a Rodeo’ about his tough life and tougher times spent trying to win it all at rodeos. In 2013, the song’s music video was selected by the TV station Great American Country and was featured during the Wrangler National Finals Rodeo competition.

A popular song among Jake Hooker fans, ‘Rodeo Man’ speaks to any country boy’s unbridled spirit. Known for his toe-tapping western swing sound, Hooker was a guitarist for the English rock group Arrows and released several solo projects, including the highly-favored album Lost Along the Way.