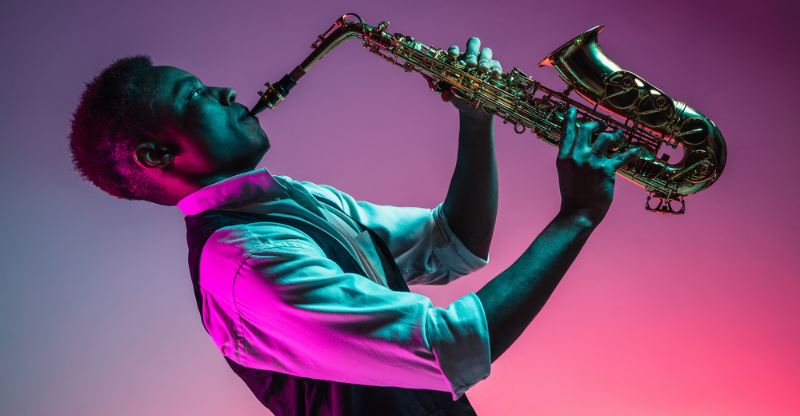 Genres from rock and roll to pop have long utilized the powerful force of saxophone in their music. Punk rockers even added the instrument to their recordings to spice up their rebellious tunes. Sax players from the jazz community would often sit in on recording sessions featuring popular artists.

From Bruce Springsteen and Lady Gaga to Stevie Wonder and Duke Ellington, here are some of the best saxophone songs out there.

On the first listen, The Rolling Stones’ song ‘Brown Sugar’ seems like their typical rock song detailing a romance between a guy and a girl. But when frontman Mick Jagger wrote the tune, he used metaphors and symbolism to give the song several meanings. Historically speaking, lyrics point to the tragedy of slavery. Bandmates point to “brown sugar” being a drug reference as well.

Related: Craving some sugar? Check out these sweet songs.

David Sanborn takes a lead sax solo in this Bowie track from his album Young Americans. The titular song tells the story of Bowie’s time spent in America in just a few minutes. The presence of the soul genre felt on the album is a result of Bowie recording the album in Philadelphia at Sigmund Sound Studios, which was an unofficial capital for African-American musicians in the ’70s.

Related: Take a trip around the country with these USA songs.

Us and Them – Pink Floyd

In 1970, Pink Floyd was commissioned to write the soundtrack for an upcoming movie named Zabriskie Point. They began to refer to ‘Us and Them’ as ‘The Violence Sequence’ because it was supposed to go in a particularly violent scene in the film. Ultimately, the director opted to use just three songs the band wrote for the film. Dick Parry provided saxophone for the track along with another one called ‘Money.’

Also the name of their 1970 album released by Elektra Records, ‘Fun House’ was an early addition to the burgeoning punk-rock movement. The entire album encompasses traditional subject matter now associated with the genre, including nihilistic views on life, financial hardship, and geo-political commentary. Steve Mackay provided a saxophone for the track and added an improvisational element to the overall tone.

Related: If you’re down on your luck, listen to these poverty songs.

Van Morrison has long been a sax player, and every time he would pick up his instrument, he gravitated to a melody he would play over and over. Finally, he incorporated it into his popular song ‘Moondance’ and even played the sax for the recording of the song. Van Morrison has always intentionally left the jazzy tune open to interpretation.

Related: Dance the night away with our songs about the moon list.

For years after his exit from the band Stealers Wheel, Gerry Rafferty was not allowed to release new music while in legal disputes with his former group. When he was finally able to release ‘Baker Street,’ the song represented a joyful new beginning and newfound hope for the artist. Baker Street is a street in London he often frequented during his early days. In this tune, musician Raphael Ravenscroft provides a saxophone solo.

Related: Listen to these great songs about London.

M83, whose real name is Anthony Gonzalez, adopted his stage name in honor of the Messier 83 spiral galaxy. He wrote ‘Midnight City’ after spending time in Los Angeles and observing their bustling nightlife. Gonzalez has mentioned in interviews this tune was the quickest one he ever wrote, finishing it up in under three hours.

The Edge of Glory – Lady Gaga

Bruce Springsteen lent Lady Gaga his saxophone player, Clarence Clemons, from his E Street Band for the recording of ‘The Edge of Glory.’ This anthemic power ballad written by the pop star is about the death of her grandfather, to whom she was very close. As she and her father mourned the loss, she sat at the piano at home and began writing the lyrical tribute.

“He’s a smooth operator.” This popular, sensual song proved to be a breakout hit for Sade. The song became wildly popular in the US after its release in 1984. Though the song is often used for romantic scenes in movies, the lyrics actually tell the story of a rich man whose “heart is cold.” In a story-telling twist, it’s implied much of his wealth comes from the women he swindles.

Related: We’re not stingy with our playlist of greed songs.

Walk on the Wild Side – Lou Reed

Gaining a cult-like following throughout the ’70s, Lou Reed changed the dynamics of rock n’ roll gender roles in many ways. His tune ‘Walk on the Wild Side’ tackled some of those issues, telling the stories of people who come to live in New York and get caught up in the sex work world to get by.

Related: Stroll along with this walking songs playlist.

Just the Way You Are – Billy Joel

“Don’t go changing to try and please me. You never let me down before.” Billy Joel wrote this affectionate tune as a birthday gift to his former wife, Elizabeth. He wanted to convey his unconditional love for her through the romantic lyrics. The song went on to be covered by several popular artists, including Barry White and Frank Sinatra.

Related: Find this song on our playlist of true love songs.

Charting at number one in the US and number two in Europe, this Stevie Wonder hit is a beautiful tribute to one of the artist’s key influences, Duke Ellington. Ellington was a legend among the jazz community. Not only was he a highly regarded band leader for an orchestra, but he was also a talented composer and piano player. ‘Sir Duke’ appears on Stevie Wonder’s album Songs In The Key Of Life.

Related: You can’t help but smile when you hear the best happy songs.

The hardest part about recording George Michael’s Wham! track ‘Careless Whisper’ was the saxophone melody. Michael had a specific vision in mind and went through about ten different sax players before he landed on Steve Gregory, who worked with him for hours until he finally recorded what Michael had in mind. The song is a fictional story he wrote while on a bus ride, though it’s often misconstrued as based on real-life experiences.

Related: Hear this song on our list of guilty songs.

One of rock and roll’s most popular songs was a hail mary for songwriter Bruce Springsteen. When he released Born To Run, his first two albums were flops. The song represented his last chance to make it in rock and roll and take his music on the road outside New Jersey. Many years after its initial release, the state actually tried to make Springsteen’s classic their official state song.

Related: Listen to similar songs on our teen songs playlist.

Saxophone provides this popular Beastie Boys song with a memorable instrumental hook between verses. The group was inspired to write this late ’80s hit by their early partying days when they worked with a shoestring budget. Brass Monkey is the nickname of a cheap alcoholic beverage you can make in bulk that includes rum, vodka, and orange juice.

Related: Check out the best songs about monkeys.

Pink Floyd’s history-making album Dark Side of The Moon, released in 1973 tackled many tough subjects, including all the bad stuff one can get into when they get their hands on a lot of money. Ironically, the album made them a ton of money, selling over 34 million copies. Richard Parry plays the saxophone in the recording of ‘Money,’ as well as several other Pink Floyd tunes.

Related: Count your coins and listen to these songs about getting rich.

One Step Beyond – Madness

Originally a Jamaican ska song recorded by singer Prince Buster, when Madness heard the tune, they knew they had to cover it. When they recorded ‘One Step Beyond’ in ’79, music videos were just becoming a big deal on MTV, but the music channel had difficulty getting enough video content to fill time slots. Madness’ quirky video for their ‘One Step Beyond’ single made it onto MTV, and American audiences went crazy over it.

Appearing on her critically-acclaimed Teenage Dream album, pop singer Katy Perry was inspired to write ‘Last Friday Night (TGIF)’ after a night of hard partying in Santa Barbara. Though she took some liberties with the song, much of it is true. Several celebrities made cameos in the video for the song, including Debbie Harry, Hanson, and Kenny G.

Related: Head over to the best Friday songs.

“The more things change, the more they stay the same.” The meaning behind this old saying is prevalent in David Bowie’s ‘Modern Love.’ Featuring call-and-response vocals and guitar work by Stevie Ray Vaughan, Bowie effortlessly tackles tough subjects including love, religion, and loneliness in this layered tune, first debuting on Let’s Dance in 1983.

Related: Here are the best songs with the word love.

Exploring the duality of growing up in suburbia and wanting to break free to experience the world, Steely Dan tells the story of an “expanding man” in ‘Deacon Blues.’ The interesting title is a bit of a random tribute to NFL football player Deacon Jones, who coined the term “quarterback sack.” The band gave the sax player from The Tonight Show with Johnny Carson, Pete Christlieb, a call for the saxophone part in the eclectic song.