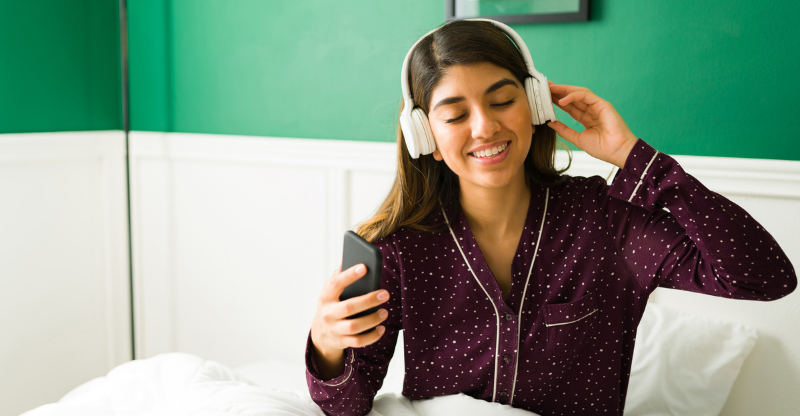 Rise and shine with this sunny list of uplifting tunes that will brighten your morning, even if you’re not a morning person. From anthems that will help you tackle your day to joyful hits and romantic numbers that will boost your mood, browse this list of some of the best songs to wake up to each morning. Which songs help you get ready to face the day?

Wake Me Up – Avicii

‘Wake Me Up’ was a controversial tune for Avicii when he released it in 2013. The Swedish DJ faced much backlash from fans who felt he wasn’t staying true to his style and was changing way too much. The curveball of a tune blends bluegrass, country, EDM, and folk genres while the lyrics deal with finding oneself in a crazy world. It’s a good song to help you prepare for the day ahead!

Alt-rock group OneRepublic reminds listeners about the power of positive thinking in this single about not getting caught up in negativity on social media. With a constant stream of information in the world due to the 24-hour news cycle, the band felt it was important to remind people not to get caught up in the drama and live life while they can.

Coldplay frontman Chris Martin was inspired by artist Frida Kahlo’s artwork Viva La Vida, which loosely translates to “long live life.” The track has taken on different meanings for members of the band. Bassist Guy Berryman felt the band gravitated towards an anti-authoritarian stance with the track and album, while Martin used lyrics to question how the afterlife plays out for people.

Songwriter and pianist Sara Bareilles reminds you to be ‘Brave’ in this empowering single from her fourth studio album, The Blessed Unrest. A song about opening up and being yourself despite the possible backlash, some critics were quick to compare Katy Perry’s hit song ‘Roar’ with Bareilles’s tune (saying Perry possibly mirrored ‘Brave’ a bit too close musically). Sara shrugged off any comparisons due to her friendly relationship with Perry. Plus, due to the media attention, ‘Brave’ received a ton of airplay and streams.

It’s all about the good vibes with Flo Rida’s ‘Good Feeling.’ The rapper features lyrics with an uplifting message and reminds the listener to walk proudly while holding their head high. The empowering track features a 1961 vocal sample from “The Queen of Soul,” Etta James.

Related: Feel great with these songs about triumph.

‘These Days’ tackles a tough subject: reaching closure after a breakup. The lively tune uses gospel elements such as a church choir and handclaps and focuses on a couple reliving the good times even though their relationship has ended. Even though the lyrics deal with a complicated matter, the piano-driven production and uplifting vocal performances leave the listener feeling inspired.

Related: See our playlist of best gospel songs to lift your spirits.

Bringing Bruno Mars’ R&B style and B.o.B.’s rap skills together, this melodic single features B.o.B reminding his girl she doesn’t have anything to worry about when it comes to other women because they have nothing on her. B.o.B, whose real name is Bobby Ray Simmons, wrote the song while reminiscing on his wild younger days and realizing how much time he wasted chasing women.

The online publication The Sun reported in 2020 that Electric Light Orchestra’s “feel-good anthem” was voted the “happiest song ever.” There’s a good reason for that. Its sunny harmonies and instrumentation are an instant mood-elevator. ELO frontman Jeff Lynne wrote the song after seeing the sun come out for the first time after weeks of clouds and rain.

Related: Check out our rainbow of songs about colors.

Featured as the official 2010 song of the World Cup, Columbian pop artist Shakira partnered with south-African afro-fusion band Freshlyground for this dance hit. The World Cup helped make the song popular that it sold over one million singles within the first couple of months of its worldwide release. Lyrics from the song remind people always to get back up no matter how many times they get knocked down.

Start Me Up – The Rolling Stones

‘Start Me Up’ is one of the rock band The Rolling Stones’ biggest hits. But it wasn’t even originally recorded as a rock song. While in the studio in the 70s, frontman Mick Jagger felt the tune needed a reggae beat. After quite a few disappointing takes, the band abandoned the song. They resurrected it in the early 80s with a new rock sound and a slick music video for the music-related television channel MTV, which had just debuted.

George Harrison wrote this delicate tune while visiting blues/rock musician Eric Clapton and spending time in his garden. Harrison had been overwhelmed by the death of The Beatles’ band manager because they subsequently had to assume more of a business role. After two weeks off from playing guitar, ‘Here Comes The Sun’ came to life on a warm, sunny spring day. It’s the perfect morning song since it will fill you with positive vibes for the day.

Related: Find this song on our playlist of songs about beginnings.

Legendary reggae songwriter Bob Marley has a way of putting you at ease while pumping you up for life all at the same time. The song reminds you to stop worrying about things you can’t control because everything will be okay. Marley was inspired to write this tune by canaries who often visited his window sill. His oldest son, Ziggy Marley, recorded a cover of ‘Three Little Birds’ in 2007.

Bill Withers is an American songwriting icon. A follow up to multiple hits such as ‘Ain’t No Sunshine When She’s Gone’ and ‘Lean On Me,’ Withers penned ‘Lovely Day’ for beloved R&B producer and songwriter Skip Scarborough. The infectious tune has been used many times in pop culture. Clothing stores like The Gap have used ‘Lovely Day’ for commercials, and several movies like Secret Life of Pets 2 feature the hit.

Related: Keep your spirits high with some feel-good music.

This bold, powerful tune was recorded in a live setting, and after its release, it quickly became a fan favorite. Inspiring people to open their eyes, examine their life, and live fully, the song was licensed many times due to its anthemic nature. Spike Lee used it as inspiration while writing a movie script. Soccer clubs, renowned bands like U2, and even the NFL used ‘Wake Up’ as an entrance song, and it’s a great song to wake up to!

Get fired up with Demi Lovato’s pop anthem ‘Confident,’ the perfect antidote to self-doubt. Lovato wanted a song that exemplified where they were at in their life. During a session with several popular industry songwriters, ‘Confident’ was born. They loved the tune so much that they titled their 2015 album after the song.

Though smash hit ‘Beautiful Day’ can take on many different meanings, U2 frontman Bono wrote it with a sociopolitical twist in mind. At the heart of it, though, it’s about learning to be happy with what you have, not what you want. With uplifting instrumentation and Bono’s constant reminder that “it’s a beautiful day,” it’s hard not to be in a good mood while listening to this track.

Related: Relax with our playlist of Sunday songs.

Walking on Sunshine – Katrina And The Waves

Katrina and the Waves might be considered a one-hit-wonder in America, but their catchy hit ‘Walking On Sunshine’ has been covered by different artists countless times, solidifying their musical legacy as hit songwriters. The upbeat tune is about experiencing pure joy just for the heck of it, and it’ll surely help you get out of bed and out of your grumpy state. The song has been used in many feature films, including High Fidelity and Herbie: Fully Loaded.

Related: Find this song on our playlist of the best 80s songs for karaoke.

More of the best songs to wake up to: