The univibe effect was a massive part of the swirling, 60s sound. It came into being when sound engineers tried to replicate the sound of rotating Leslie speaker cabs – they’re pretty much essential if you want to get that Jimi Hendrix sound.

In this article, we explore the things you need to consider when buying one. We also consider the different types available; from analog to digital to hybrid.

At a Glance: Our Choice of the Best Univibe Pedals on the Market

Ok. here’s what we cover in this article.

What is a Univibe Pedal?

As we already mentioned, the univibe is an essential guitar pedal for capturing that 60’s Hendrix sound. It came into being when sound engineers and guitarists started experimenting with Leslie amps (which had rotating speakers that modified the sound of the instrument). These amps were originally made for organists, but people quickly realized that the effect worked tremendously well for guitar too.

So what do they do? Well, they basically have two main functions: to add chorus or vibrato (making them essentially dual-pedals).

The chorus effect takes your guitar signal and fattens it by mixing the guitar’s dry signal with an effect that’s shifted in time and pitch — the result: a fat, phase-y sound.

The vibrato effect emulates the sound of a spinning speaker found on Vibratone amps made in the 60s and 70s. This mode makes the signal pulsate so that it sounds like its cutting in and out, or spinning in circles – like the speakers on a Leslie amp.

There are two main types you need to know about. The analog variety, made using photocell circuitry, give you a warm, natural, vintage tone. As you’d expect, modern digital alternatives have more features and generally offer a cleaner sound than analog ones, too. There are one or two ‘hybrid’ univibe pedals available (such as the Fulltone we look at below), which use a combination of analog and digital circuits and give you the best of both worlds.

There are some features common to almost all of these boxes.

The rate or speed control allows you to control the pace of your sweep. When you’re in chorus mode, this controls the speed of the delay of your altered signal. When you’re in vibrato or ‘vibe’ mode, it changes the rate at which your virtual speaker spins. When you turn it up, you can get some intense, psychedelic sounds. At lower speeds, the effect can be a subtle swirling.

In chorus mode, this control will decipher how ‘far out’ the pitch shifts are in your wet signal. In vibrato mode, it controls how big your circle is. The bigger the circle, the more full the vibrato. Like with the rate/speed knob, turning this up full will get you some wild sounds. The lower you go, the more discrete the effect will be.

Some of the better stompboxes come with either integrated  (or connectable) expression pedals that were a feature on the original. They look a bit like a wah, and are used to control the speed of your sweep. They’re a must for those who want to use it ‘like an instrument’ as they give you control and creative options that can be adjusted mid-performance with your foot.

Flashing LEDs are a feature on many of these products and let you visually track the rate of your sweep. On the analog variety, they’re often connected to the photo-cells to ensure that the effect is in time with the music. Flashing LEDs are also handy if you require a visual representation in the dark.

True bypass is when there is no circuitry or buffering between the guitar’s input and output. It enables you to turn it off without having a touch of interference, and many argue that it also affects the sound while you’re playing, making the tone more accurate to your instrument’s original sound.

So, now you know what to look out for, it’s time to take a look at some of the best products on the market. 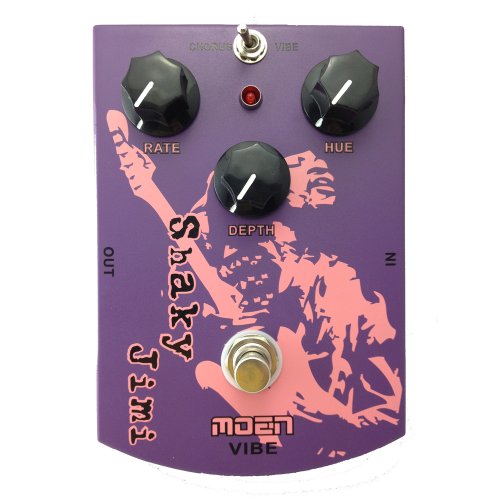 One of the cheapest on the market, the Moen Shaky Vibe produces a sound easily comparable to the more expensive models on the list. It uses photocells – as the originals did – to help prevent any unwanted distortion and to enable classic Hendrix/Trowers tones. There’s a switch for you to choose between chorus and vibe effects, and three control knobs: rate, depth, and hue. These allow you to change the speed, intensity, and tone of the sound so you can fine-tune it to suit your playing style. There’s an LED to tell you when it’s switched on. However, this LED doesn’t flash in time with the speed of the effect, unlike with some more expensive univibe pedals.

A 9V adapter can power it, but there’s no battery power option.

It is excellent value for money and will suit those on a budget who want something simple, sturdy and reliable. It will be less suited to guitarists who play in dark rooms or venues and would benefit from a flashing LED to track the rate of their vibrato or chorus effects, or to those who want to control the expression with their feet. Despite the price, it comes in sturdy, metal housing too. 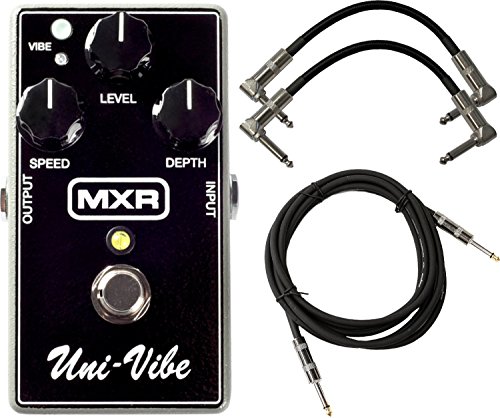 The MXR M68 Uni-vibe is a small analog unit, which, like the Moen Shaky, allows you to switch between chorus and vibrato effects. It has speed, level and depth controls which lets you fine-tune the intensity of the effects, plus there’s an LED status light to give you a visual representation of the sweep rate at a glance.

It will hardly take up any space in your pedalboard, and it’s also lightweight. There’s a true bypass too, so it won’t muddy your sound or create any unwanted buzzes or hums when you’re not using it. It also can be powered off either a 9V power supply or using a 9V battery. 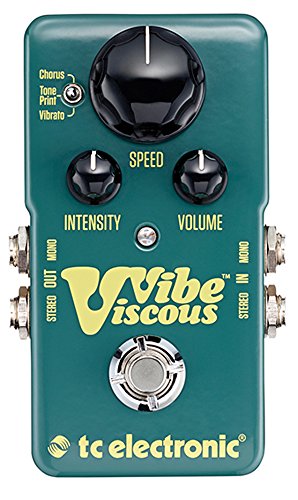 The Viscous Vibe is of the digital variety which not only captures the sound of original but places emphasis on your unique needs as a musician. The Viscous Vibe also has both stereo and mono inputs and outputs, which is great for both recording purposes and clarity of sound during gigs. There are speed, intensity and volume dials that allow you to adjust your sound.

It’s the most customizable product in this round-up, as it comes with software that lets you store the sounds of your favorite guitarists into your phone, tablet or computer and quickly fire them into your pedal via the free app. Plus you can use the app to fine-tune your sound exactly as you like it.

It’s perfect for tech-geeks who want to get creative with their sounds using the software. It will be less suited to those who want something more akin to an old-school unit. 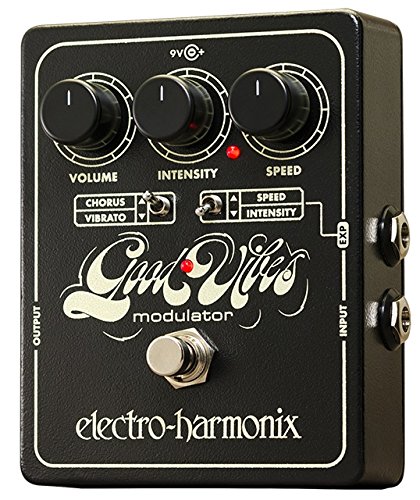 The EHX Good Vibes is a reasonably priced analog unit that is simple to use and captures an authentic tone pretty well.

There are volume, intensity and speed dials which let you control how much you can hear the effect, how powerful it is and how fast the rate of the sweep is. There’s also an LED which flashes at the rate of the sweep, so you can track how fast it’s going even in darkened environments. Like the originals, this uses photocells to create a warm chorus and vibrato.

It will suit more expressive performers who like complete control over various aspects of their sound on stage. It’s less suited to those who want something super-simple to get started with, though it isn’t difficult to use by any means. 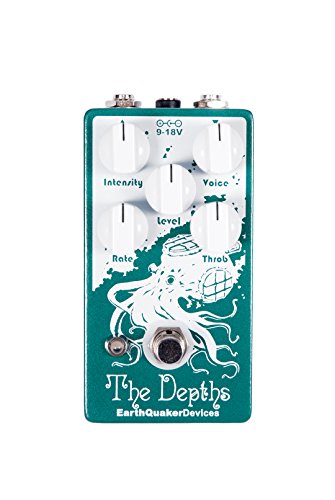 ‘The Depths’ tries something new and breaks away from the typical univibe offering. As well as intensity, rate and level controls, there are additional knobs for ‘voice’ and ‘throb.’ The ‘voice’ control works like a tone control, allowing you to bring out low, mid or high ends. The ‘throb’ control focuses on the pulse of the low-end sounds, which although subtle can be very effective and gives you increased control.

It’s a compact, well-built unit with sturdy metal casing. It’s fully analog and can be powered by either a 9V adapter or a 9V battery. There’s a true bypass so that it won’t muddy your signal at all, and a status LED so you can track the speed of your sweep when you’re on a darkened stage.

It’s quite expensive, so it will suit the professional performer who wants to get their hands on something special that they are happy to spend a bit of time getting to grips with. It will be less suited to musicians on a budget. 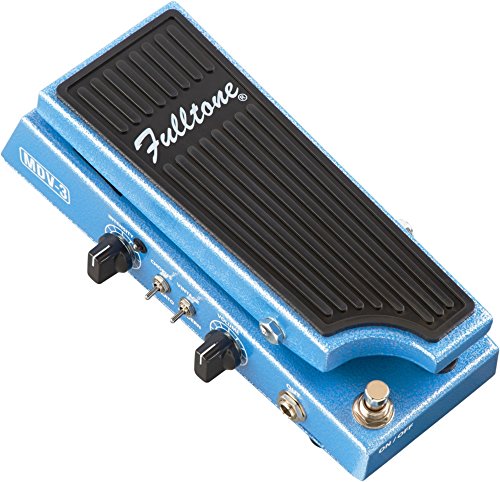 This hybrid number from Fulltone is the closest you can get to the originals of the 60s, without tracking down a second-hand vintage. They’re pricey compared to the likes of the Moen Shakey Jimi Vibe, but the quality’s unbeatable. It’s a digital/analog hybrid offering which, as well as letting you switch between chorus and vibrato, has an extra switch to shift between vintage and modern sounds. It also uses photocell circuitry and an incandescent bulb: the same that’s found in 60s univibes.

There’s an intensity dial and a volume dial – the intensity dial has an LED next to it which flashes according to the speed of your vibrato. With an integrated expression pedal, you have full control over your effects at all times and can treat it like an instrument in its own right. There’s also a switch for true bypass so that the Fulltone won’t hurt your sound.

This will be best suited to those looking to recreate the vibe of the 60s. It will be less suited to players who are looking for innovation and want to be able to adjust their sounds using software etc.

As you can see, which one you choose depends on whether you’re hunting for the Hendrix sound, seeking innovation or looking for the ultimate controllability of tone.

If the Hendrix sound’s what you’re after, the Moen Shaky Jimi Vibe offers a lot at a budget price (and even uses photocell circuitry to achieve those warm, analog tones like the originals). The MXR M68 is similar but includes a flashing LED and comes at a slightly higher price. Both of these are easy to use and have a switch between vibrato and chorus effects as well as three control knobs

If you want something with an integrated expression pedal, the Fulltone Custom Shop MDV-3 is superb, combining digital and analog circuitry and allows you to choose between vintage and modern tones at the flick of a switch.

The EHX Good Vibes also has excellent expression pedal functionality and comes at a reasonable price, though it isn’t integrated and it’s likely you’ll need to fork out more for one separately.

The Depths offers something a bit different, with its extra tonal settings – so it’s perfect for innovation rather than replication. Even more attractive to innovation-seekers will be the Viscous Vibe. It’s compatible with Tone Print software, which lets you fine-tune sounds using a computer and also has stereo outputs which can make your effects really stand out.

Whichever kind of sound you’re going for, we hope this article has helped you find it.

Ged is Founder and Editor-in-chief at Zing Instruments. He's a guitarist for London based gypsy jazz band 'Django Mango' and a lover of all things music. When he's not ripping up and down the fretboard, he's tinkering with his '79 Campervan.