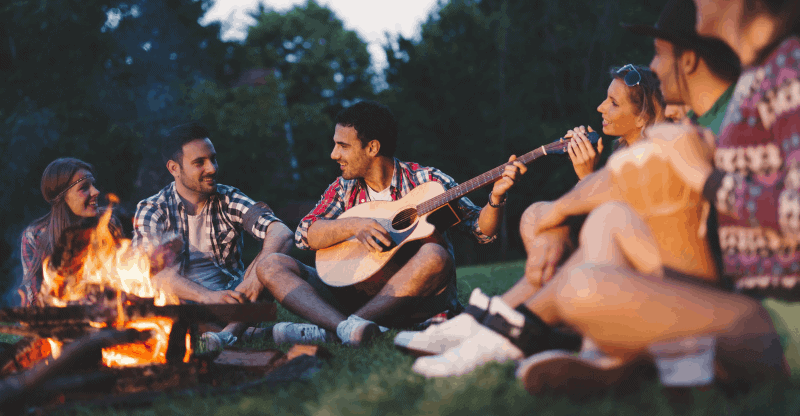 Going camping and thinking about taking your acoustic guitar and knocking out a few tunes around the fireside? Great idea.

If you’re looking for something new to play, asides from the ‘same old’ songs you’ve always played (e.g. Knockin’ on Heavens Door), here’s a list of the some of the best campfire guitar songs that are easy to play and that your audience will enjoy hearing. If you play them really well, you might even get them singling along.

The Best Campfire Guitar Songs (In No Particular Order)

Catch the Wind by Donovan

This romantic ditty from folk 60’s sensation Donovan is an absolute treat and works perfectly around the campfire. Some wrote Donovan off as a Dylan wannabe back in the 60s, but this song puts him firmly in the land of the untouchables. Nice work sir.

This little treasure oozes old country blues and sounds particularly great played on a blues acoustic guitar, but equally sounds great played on a banjo. Written by master songwriter Bob Dylan, it’s got a lot of oldy-worldy charm going on. If you were to only learn one tune from this list, choose this one. It’s one of the best campfire guitar songs ever written.

From Neil Young’s Buffalo Springfield period in the 1960s, this acoustic number is beautifully nostalgic, evoking images from his youth. Reflective, poignant, and all about the passing of time and leaving home – all perfect themes to bring up at a campfire. The chorus is immediately familiar, even if you’ve never heard it. A cracker of a song.

Country Honk by The Rolling Stones

No campfire is complete without a Rolling Stones number. This one is a countrified version of ‘Honky Tonk Women’ from album Let it Bleed. It’s super easy to play, and anyone with half a clue will recognize the lyrics.

No Woman, No Cry by Bob Marley

This Marley classic has a soft rock steady beat that goes down really well. With a chorus that’s almost made to be sung along to, it’s a dynamite track to unleash on your fellow camp-dwellers. It finishes on a brilliant crescendo with the “Everything’s gonna be alright” which everyone will want to join in on.

Stand By Me by Ben E. King

This is one of those campfire songs that was made for playing under the stars and sounds gorgeous on an acoustic guitar. If people don’t sing along to the chorus ‘and darling, darling, stand by me’ then you may as well call it a night and go to bed early.

I’ll Be Your Baby Tonight by Bob Dylan

This romantic little ditty from Dylan includes gorgeous references to the moon, essential in any rustic campfire song (“that big ole moon is gonna shine like a spoon”) and encourages wanton abandon (“kick your shoes off, do not fear, bring that bottle over here”). A superb choice.

This one is a bit of a victim of its own success (overplayed at weddings), but it remains a terrific number to play around the burning embers. You’re almost guaranteed that everyone knows it and sings along, young folk and old. The ‘sha la la la la ti da’ line will be a delight for your audience to sing along, especially if they’ve been on the scrumpy.

It’s good to mix well-known numbers (like brown eyed girl) with one that almost no one will know, but a decent one nonetheless. Lady Midnight, from songwriter Cohen’s second album, was recorded while living in exile on a Greek Island. It’s a gentle, swaying ballad that’s a joy to play and has a lovely chorus.

As chorus’s go, this has to be up there with the best. The verses build themselves up perfectly, to unleash the ‘and I’m free, freeeeeee fallin” chorus. If your campers don’t join in on the chorus on this one, you’ve got a tough audience! It’s easily one of the best campfire guitar songs on the list.

Where would a list of campfire songs be without Wonderwall? It’s a sure-fire crowd-pleaser that you may as well throw in the mix though. Plus, it will make your audience more tolerant of more obscure songs like Lady Midnight (see above).

Love him or hate him, Jack Johnson makes incredibly catchy songs. The stuff that crowds of people tend to love. That’s good news for you if you’re planning on playing a campfire gig. As far as good acoustic guitar tracks, he’s contributed his fair share. With a catchy middle eight and solid chorus, ‘Good People’ is a winner.

With a perfect banjo playing in the background (if you have a banjo, definitely have them accompany on this one) this jangly guitar hit from 1990’s indie stars Travis is a perfect blend of slightly obscure (that’s a good thing, sometimes) and instantly likable revelry. Also, it incites people to sing, sing, sing in the chorus, which is never a bad thing (depending on your company).

High and Dry by Radiohead

Radiohead are one of the most respected bands of the last 20 years. And rightly so. They have contributed massively to the canvas of modern music. That’s why we had to pick one of their numbers. Their number High and Dry was a no brainer really. For Radiohead, it’s quite palatable and quite sing-alongable to.

The song that catapulted Coldplay to worldwide renown, Yellow is another modern classic to add to your set list. There are a few Coldplay numbers that are worthy of inclusion, but Yellow has to be pretty high up there. It’s almost their most famous track too, so even your grandma will have a sing-along.

Man on the Moon by R.E.M

This quirky pop song is going to go down well. It’s rather tricky to play, so make sure you’ve practiced it before you go belting it out. But once you’ve got the chorus licked (that’s the tricky bit) then you’ve got one helluva number to entertain people with.

“If there’s no one beside you when your soul embarks, then I will follow you into the dark”

Another tricky one to play well, Death Cab for Cutie’s ‘I Will Follow You Into The Dark” is an indie song of almost hymn-like proportions. The lyrics are pretty morbid, but the sentiment is spot on.

“If I just lay here, would you lie with me and just forget the world”

What a great lyric for a campfire. ​It works particularly well with two guitars (one playing the lead bit and the other the rhythm) but it can be played fine on one guitar too.

With Or Without You by U2

“I can’t live, without or without you”

This had to go on the list because it’s an absolute gem. It satisfies everything a good guitar campfire song needs to be: catchy, familiar and you can sing along to it. It’s a slower number too, to mix things up.

John Denver’s classic is a must for any campfire gathering.

I mean who in their right mind isn’t going to enjoy a bit of ‘west virginia, mountain mama’! In fact I’d be surprised if you got past the first verse without people joining in!