14 Songs from the Clueless Soundtrack 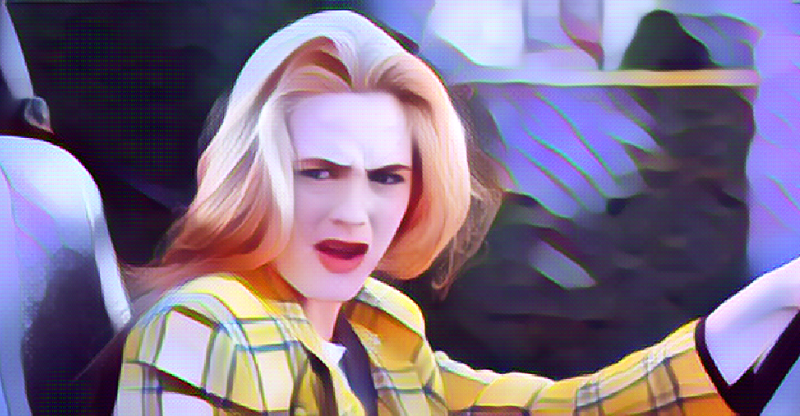 Alicia Silverstone stars in 1995’s coming-of-age comedy Clueless. The film was one of the pop culture highlights of the 1990s and featured a wide range of songs representing the era.

Revisit the film by learning about the music on the Clueless soundtrack album and how the songs tie into the movie.

Kids in America – The Muffs

This track plays during a montage when Cher and her friends enjoy life in California. It highlights their youthfulness with lyrics that celebrate being a young American. The Muffs covered the song for the film and its soundtrack; Kim Wilde was the original singer, releasing the track on the album Kim Wilde in 1981.

Related: Hear more of the best songs about kids.

This song is playing when Cher makes up stories for her teachers to improve her grades. Lyrically, the track is about needing action in one’s life—possibly of the romantic variety—to be fully satisfied emotionally and “to make it alright.” The track was originally sung by Flamin’ Groovies in 1976.

The Ghost in You – Counting Crows

Audiences can hear this Counting Crows cover of the Psychedelic Furs piece when Cher calls Josh for a ride as he enjoys a romantic moment. The lyrics speak to a love tinged by haunted emotions as the protagonist considers taking risks in life to make existence more worthwhile.

This Squirmel remix of ‘Here’ plays when Christian continues to dance at the ska party. It’s a fitting song about dancing that also finds its protagonist asking a love interest to understand that no one else will be there for them—both in life and on the dance floor—besides the protagonist.

Related: Check out similar songs on our list of songs about dancing.

All the Young Dudes – World Party

This track highlights Cher’s criticisms of sloppily dressed modern boys in the film. The original Mott the Hoople song from 1972 was written and produced by David Bowie; World Party covered it specifically for the film. The lyrics are about young people and their oddities and better qualities.

Related: You can also hear this song on the Juno soundtrack.

‘Fake Plastic Trees’ plays in the film as Cher finds Josh listening to college radio. The lyrics are about Canary Wharf in London, an area of promise that didn’t live up to its expectations. The area was filled with plastic plants at the time, which inspired the song. The lyrics also speak to superficial love as well as tiresome relationships.

Related: Find this song on our list of songs about trees.

Mr. Hall and Miss Geist are happy—as are the students—when this song plays in Clueless. The track’s lyrics present a protagonist talking about an idealistic, adventurous person—most likely a love interest—who may be ill-informed but is inspiring and refreshing nonetheless. ‘Change’ also appears on The Lightning Seeds’ album Jollification from 1995.

Related: If you need some change, check out these songs about growth.

Need You Around – Smoking Popes

Here’s a Smoking Popes track that plays during the Clueless end credits. The protagonist feels lost and isn’t afraid to admit to looking for love with a special someone that could possibly make things better in life. This piece also appears on the album Born to Quit, which was released in 1994.

This 1994 Beastie Boys track seems to be about a cool dude with a mullet and also talks about the hairstyle itself; both the subject and the hairstyle are presented in a positive light. ‘Mullet Head’ is a backdrop for Travis’ skate competition in the movie.

Related: Listen to these hair songs.

The Mighty Mighty Bosstones present a ska track that finds its protagonist confused at the loss of a love interest who has left. Viewers can hear ‘Where’d You Go’ playing in the club scene as Tai feels self-conscious after a public slip-up. The song was released on an EP album of the same name.

Rollin’ with My Homies – Coolio

Coolio was asked to write a song for the film and already had this one ready to be released at the time. It’s a party anthem about having good times with friends while partying. This can be heard as Elton helps Tai after her concussion and asks her to dance with him.

Alright’ can be heard as Cher takes pictures of everyone in the film. It’s an upbeat, summery teen anthem about young people who might make mistakes but realize they will be okay with their friends by their side. It was also featured in the film On The Edge in 2000.

Related: Here are the best songs about teens.

The girls go eating at the mall to help Tai feel better when this song is played. It’s a breakup track where the protagonist wonders why she was treated poorly. She also admits, “All I want to do/Is live my life/And forget about you,” but has trouble letting go of the relationship.

Tai is given a makeover by Cher and Dionne when this song is heard. The lyrics tell the story of a girl who wants to be so beautiful that she is the envy of everyone. Jill Sobule had to learn about teenage girls and their desires to write the song, highlighting the superficiality of Beverly Hills life as presented in Clueless.