19 Best Country Karaoke Songs to Bring the House Down 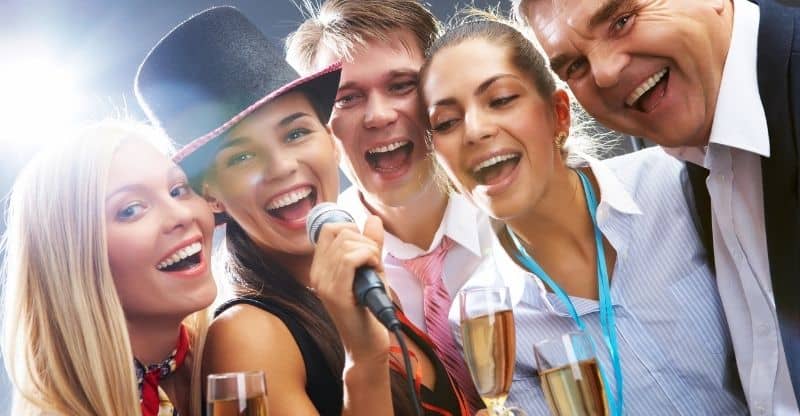 Every karaoke bash should have a little (or a lot) of country music.

There’s something intoxicating about many of these country songs, and the messages about valuing the important things in life (love, family, friendship, and a cold beer) are spot on for a great night of revelry (and a great life, to be honest).

So without further ado, here are the best country karaoke songs to try next time you’re handed the mic. Go on, raise the roof with ’em!

This song is a celebration of life, the simple life. Brown sings it’s not “where you live, what you drive or the price tag on your clothes”, its all about spending time with the family and enjoying the simple things like “a cold beer”, or “jeans that fit just right”. Belt this one out on a Friday night and you’ll bring the house down 🙂

What started out as an obscure Bob Dylan song, is now a well-known and loved country tune. The Old Crow Medicine Show popularised it, but it’s this version by Darius Rucker that takes it to new levels. Get anywhere close to this rendition, and you’ll definitely be invited back to the next Karaoke bash!

Here’s another iconic country song that’s already done the rounds, first with David Allan Coe in the early ’80s, then later with George Jones. This version, recorded in 2015, became a hit and led to Stapleton winning a CMA (Country Music Award).

To say ‘It’s Five O’Clock somewhere’ means “let’s have a drink early because somewhere in the world it’s Five O’Clock” (the time the working day typically finishes). If you live by the rule, you’ll end up an alcoholic. Beware!

That Don’t Impress Me Much – Shania Twain

Here, Twain displays a ton of disdain for guys who are full of themselves. Met many of those? Yup, I bet. This is a perfect karaoke song for girls if you want to stick it to the men.

Chesney’s classic song about the carefree beach lifestyle is a fantastic song to get people jazzed up. The explosive chorus is a delight too, and perfect for blowing the blues away. Of course, to get into full character you need to throw of your shoes and shirt.

Cowboy, Take Me Away – Dixie Chicks

If we’re talking country music, cowboys need to get a mention. And who better to sing about them than the brilliant Dixie Chicks. It’s a song about the exhilation of meeting someone new and being whisked “into the wild blue”. She also wants to “grow something wild and unruly.” I’ll leave you to figure that one out :p

This song celebrates being out in a bar – and if you’re singing karaoke chances are you’re in a bar – so this one is a perfect fit. As it’s a Jimmy Buffet song, it’s got that instant likeability that most people respond positively too. His other classic ‘Margaritaville’ is a good choice too.

Before He Cheats – Carrie Underwood

Ever been cheated on? Then you’ll know all about wanting to get your own back. In this song, Carrie Underwood lives out many peoples fantasies when their partner does the dirty – she trashes his 4×4 truck with a baseball bat. Extreme, but probably gets the point across (not a wise idea by the way, you’ll be breaking the law.)

For those who know their geography, you’ll know the Chattahoochee river forms part of the border between Alabama and Georgia. Here, Alan Jackson sings about growing up in a little town by the river, and learning about life and love in the process.

All My Ex’s Live in Texas – George Strait

Here, the narrator has lived most of his life in Texas (along the Frio River) but a series of failed romances with women has put him off going to the state, period. He now “hangs his hat” in Tennessee. Wise move.

Ok, if you don’t know Jolene you’ve been living under a rock! It’s one of the most popular karaoke songs ever. In the song’s lyrics, Parton pleads with Jolene not to take her man away from her.

There are rather desperate people out there who brag about their well to do friends, “friends in high places”, as the saying goes, but who aren’t really friends (the sort of friends you can share all your troubles with).

In this song about true friendship Brooks sings about his lowlife bunch of friends (“in low places”) he hangs out with at the Oasis bar “where the whiskey drowns, and the beer chases my blues away.”

In this famous song written by Nashville songwriter Don Schlitz, a card shark gives the narrator some life advice using poker metaphors, with the notorious line “you’ve got to know when to hold ’em, know when to fold ’em”. It’s not so much a song about gambling than is it a song about life, and is perfect for any country karaoke session.

Want a song thats a little bit country but one that everyone knows? Then try this classic by John Denver. It’s a song about returning home, and is 100% guaranteed to have everyone up their feet joining in with you.

Lady Gaga & Bradley Cooper (from A Star is Born)

Duets are great for karaoke. Standing up there with someone takes the nerves away a little (especially if it’s your first time) – plus there are some truly great songs that require two people. This song is a relative newcomer to the party and is already pretty high up on the list of best karaoke duets.

Sweet Home Alabama is so well-known that it’s almost annoying. Almost. It’s still a cracker of a song, and like ‘Country Roads’ (see above) is one of the most beloved karaoke songs ever written. If you want a crowd-pleaser, walk this way.

You can’t have a list of country karaoke songs without ‘Achy Breaky Heart.’ It just wouldn’t be right. I have randomly line danced to this song at a campsite in France (with a load of French people) and can testify that it works for that. It will work or a karaoke session too.

Here’s one of those songs that you’ve probably heard, but have no idea who it’s by. Drift Away was originally sung by Dobie Gray with a more recent version by Uncle Kracker (check that version out too). It’s a great song if you can hold a tune.