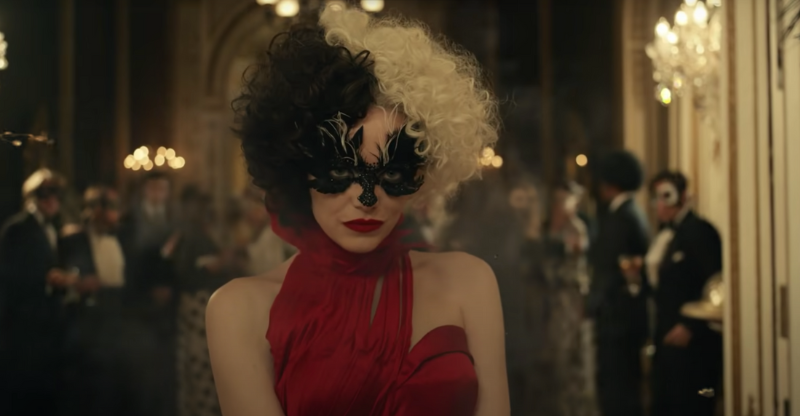 What’s black, white, and red all over? Cruella de Vil and her fashion, of course!

Viewers get to know Cruella like never before with this Disney addition to the 101 Dalmations series. Fashion enthusiasts and punk rock fans alike will love the wardrobe and music choices.

The Cruella soundtrack includes some classic ’70s rock songs with a British slant coupled with minimalist punk rock hits playing over a storyline featuring Cruella attempting to defeat her nemesis, “the Baroness.”

Call Me Cruella – Florence + the Machine

Cruella needs no introduction, but that didn’t stop the film crew from hiring indie band Florence + the Machine to write the character’s own theme song. ‘Call Me Cruella’ plays over the credits, but it’s not one you want to miss. The song feels like it could have been included on a Blondie album and contains elements of ’70s Brit-rock stylings.

We are introduced to Cruella’s origin story as Supertramp’s high-energy, anti-establishment anthem ‘Bloody Well Right’ plays along with a montage of scenes. Cruella’s younger years were spent at a buttoned-up prep school where continuous attempts were made to stifle her creative streak. This song sets the musical tone well for the movie, which features a dynamic British rock vibe drawing from the early ’70s.

Related: Boost your confidence with these songs about accepting yourself.

This prog-rock song plays in the background during a flashback scene in Cruella. The scene features a desperate Catherine (Cruella’s mother) looking for ways to get help for her and her child after falling on hard times. As Catherine drives up to it, a beautiful mansion comes into focus, and ‘Whisper Whisper’ drones in the background. The character living inside the mansion ultimately becomes the movie’s main focus.

Related: Down on your luck? Listen to these songs about being poor.

Five to One – The Doors

Featured as the Baroness’ “entrance song,” The Doors’ R&B-tinged rock song ‘Five to One’ introduces us to her as she meets Cruella for the first time when Cruella visits her mansion. Ultimately, a police chase comes into play but not before the beginnings of an infamous rivalry are set when the Baroness hires Cruella to work for her.

Set against the backdrop of the decadent mansion of “the Baroness,” this dreamy song was originally a Jazz standard. Over the years, artists from Michael Bublé to Nina Simone have covered it, adding their own personal artistic flair to the legacy of the song. The jazzy number drives home the excessive lifestyle the Baroness leads.

Related: Find this song on our playlist of starting over songs.

The 2021 Cruella soundtrack continues to get funky for the movie with Ohio Players’ ‘Fire’ from 1974. The song stands as a significant turning point for young Cruella in the fashion world as she is coming into her own and discovering her original “look.” This tune is featured on the Ohio Players’ album by the same name and hit number one on the Billboard charts after its mid-’70s release.

Led Zeppelin released ‘Whole Lotta Love’ in ’69 and became a huge hit. Ike & Tina Turner covered it in 1975 and gave the tune a more funky beat while Tina wailed over the grooving drums and classic guitar riff. The cover appears on Tina’s ’70s album Acid Queen.

Related: Hear the original version of this song on our list of baseball walk-up songs.

When this song plays, the Baroness hosts an eccentric ball for her friends. But Cruella and her crew have other plans for the party. The orchestral sound of the hit song ‘Livin’ Thing’ transitions to rock as saboteurs wreak havoc on the event. When crashing the Baroness’ party, no stone is left unturned, from rats to a compromised cake.

This nonsensical ’70s Queen tune accompanies a climactic part of the film when Cruella discovers a momentous secret the Baroness has kept for many years. As Cruella flees after learning the truth, the song’s explosive mood pairs well with her racing mind. Though this song was never released as a single, it has become a popular track for artists such as rock band Metallica to cover.

One Way or Another – Blondie

Much of this film pits Cruella against her arch-enemy, “the Baroness.” Blondie’s anthemic pop-punk hit ‘One Way or Another’ blares as a montage of scenes plays on the screen featuring Cruella planning her enemy’s defeat. Like Blondie, fashion plays a huge part in Cruella’s life, and her ultimate goal is to become a key player in the fashion industry.

Related: Strut over to the best songs about fashion.

Should I Stay or Should I Go – The Clash

Punk rock and the fashion world have always gone hand-in-hand, and the film pays homage to this intertwined legacy by seamlessly combining the two. The Clash, easily considered part of punk rock royalty, is included in the film’s soundtrack with their mega-hit ‘Should I Stay or Should I Go.’ The song plays over a scene when characters fashion “haute couture” items out of people’s garbage.

The production crew adds a little humor to the otherwise temperamental mood of the film with ‘I Love Paris.’ As characters are tasked with completing dirty work (literally), this Cole Porter original plays over the scene. Porter wrote the tune in 1953, and pop singer Georgia Gibbs provides vocals for this rendition.

Related: If you’re in the mood to travel, you’ll love the best city songs.

Cruella uses easy-on-the-ear vintage music while exemplifying the differing philosophies of the two characters in the film. While one enters the fashion industry to love the craft, the other uses fashion to gain more power. ‘Love Is Like A Violin’ plays over a pivotal scene between these two opposing forces.

I Wanna Be Your Dog – John McCrea

As Cruella leads a fashion “flash mob” in a parking lot, this garage punk cover of a Stooges’ original tune plays. This tune accompanies a huge moment for Cruella in the film when she scores her first victory over the Baroness by stealing attention away from the antagonist’s fashion show. Cruella also reveals her infamous Dalmatian coat. (Don’t worry—no Dalmatians were harmed in the making of the coat!)

Related: Sit! …and listen to our list of dog songs.

Nothing unites people like a common enemy, and that is exactly what the scene is all about when this song plays. Ike & Tina Turner’s cover of The Beatles’ 1969 classic ‘Come Together’ accompanies Cruella in reuniting with her friends for one last attempt to defeat their foe. The moody instrumentation vibes with the over-the-top drama of the film.

Related: Find the original on our playlist of the best unity songs.