Easy Guitar Songs You Can Play With Only a Few Chords 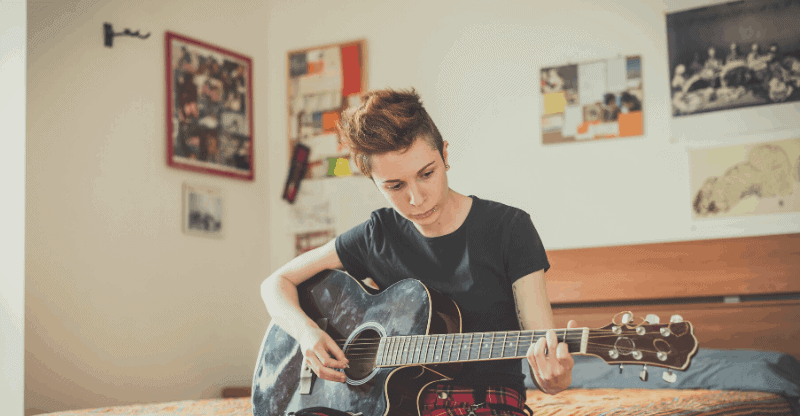 If you’re learning how to play guitar, there’s nothing more satisfying than learning a new song.

Way too many beginners start with songs that are too difficult for their level.

The secret is to start with easy songs. You want songs with two, three, or a maximum of four chords are the best.

Want to know which we’d pick? Here goes then.

For each song, we’ve included a video of the original song so you can hear how it’s supposed to sound, along with a simplified guitar chords chart.

Breakfast at Tiffany’s – Deep Blue Something

We’re going to start with a simple three-chord song called Breakfast at Tiffany’s.

The great thing about this one is you play the same three chords for the verse, then just switch the order for the chorus, making it super easy to play.

Have a quick listen to familiarise yourself with it.

When you get to the chorus, just switch the final two chords, D – G – A:

Sweet Home Alabama is one of the best songs about home ever recorded, so popular in fact that the State of Alabama uses the phrase ‘Sweet Home Alabama’ as the official slogan on car license plates!

First, give it a listen:

Here’s how you play it:

Here’s another classic using a simple four-chord progression. Check out this incredible version:

To play it, just hit these four chords and you’re good:

The Joker – The Steve Miller Band

Another simple song from the Steve Miller band, The Joker is one of those foot tappers that is fun to play.

Then the chorus is the same chords, in a slightly different order:

Horse With No Name – America

Three chords too much for you, how about two? The chart-topper Horse With No Name is as simple as it gets.

Here’s how you play it – you can’t get easier than this:

Let’s get our funk on with this modern classic, Get Lucky.

And here are the chords:

Now for something a bit more alternative, from UK indie rockers Bastille. Take a quick listen:

You can play this in open tuning, but it’s better with a guitar capo at the 2nd fret.

Play all four chords throughout the entire song. Easy!

What list of easy guitar songs would be complete without a song from the bard of our generation, Bob Dylan. Knocking on Heaven’s Door is one of those numbers that every beginner guitarist ought to know. You may be more familiar with Guns & Roses version.

This list should give you plenty to work on 🙂

If you’re wondering how to solo over one of these tracks but not sure what key it’s in, check out our song key finder tool which will help you identify the key it’s in.