14 Easy Piano Songs to Get You Started 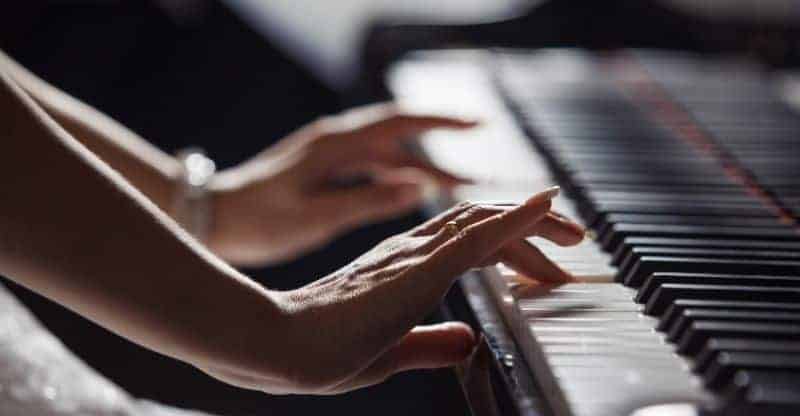 If you’re reading this you’re probably wondering “what should I learn first on piano?”.

I get it. We’ve all been there. There are lots of great songs to choose from.

You want to find easy piano songs that sound impressive. That way, when we play in front of friends or family, they’ll be floored by how good you’ve become.

So which are these songs? Well, I’ve come up with this list of cool piano songs. The good thing about them is that anyone can learn to play them, whatever your skill level. It doesn’t matter how long you’ve been playing.

All you need is a half-decent piano (with 88 keys, ideally). You don’t need to be super talented – you just need to follow along with the simple instructions.

You can do that, right?

I’ve included a selection of pop songs,  nursery rhymes, classical music, and some traditional songs. Each one is a crowd pleaser. You won’t need to read any sheet music either, you just need to go through the easy-to-follow videos showing you which fingers to place on which keys.

If your piano has a sustain/damper pedal (most do), make sure you use it – it will help you sound more fluid, especially if you’re still slow moving from chord to chord. Don’t overdo it though or everything will sound muddy.

Note: most of these tunes you will hopefully have heard before. Learning to play songs that you already know is really helpful for beginners (even if it’s a nursery rhyme) as you already have the music notes in your head (so you know what it should sound like).

Ok, let’s start with the most well-known of all songs…Happy Birthday!

At some point in your life you’re going to be at a birthday party where there’s a piano (if you have kids of your own, it will be a regular affair), and knowing how to play Happy Birthday will come in very useful.

It’s one of those easy piano songs you just need to learn. Once you’ve got it, it will just roll off the fingers. Don’t skip this one!

Another of the classic piano songs for beginners is Chopsticks. It simply must feature in any ‘essentials’ list. Most know the tune and most will enjoy listening to it. There may be a couple of nay-sayers who can’t stand it, but politely ignore those people!

Like Happy Birthday, if you have kids present (especially toddlers) playing a touch of Twinkle Twinkle will go down a treat. It’s another piece to learn and commit to memory, but don’t go expecting to entertain a group of adults with this one at your next soirée.

Another crowd-pleaser for the young ‘uns or if you’re at a festive gathering with a group of adults (better if they’re inebriated!). It’s one of the easiest piano songs to learn because of all the repeated notes, so you should be able to pull this off in most states.

The last one for kids, we had to include a Disney number. Let it Go from the Disney smash hit movie Frozen has some great bits to it. and is fairly easy to play. Just don’t go messing it up like Olaf.

Now for some grown-up songs.

Heart and Soul by Hoagy Carmichael is a classic number that works great played as a duet on piano (where two piano players sit side by side). It looks and sounds incredibly hard, but with a bit of perseverance, any beginner can learn it. It’s also good for learning the standard I-Vi-IV-V progression.

It’s a super party piece too if there’s someone you can duet with.

What a Wonderful World

Another tune from yesteryear, any aspiring pianist should know how to play the Louis Armstrong classic What a Wonderful World on the piano. It’s simply gorgeous.

The late, great, Leonard Cohen was one of the best songwriters of recent times. One of his most beautiful is Hallelujah. It has a gorgeous chord sequence, moving melodies, and stunning lyrics There are many versions of the song, the most famous being Jeff Buckley who popularised the song.

We had to include a Beatles number in here. Let it Be is a Paul McCartney penned classic from the Beatles’ final album. It’s surprisingly simple, though the intro may require a little more practice.

Blinding Lights by Canadian singer the Weeknd, sounds like a pop song straight out of the ’80s. It has just four chords that it cycles through, making it a great beginner piano song too.

How about some Latin? Havana by Camila Cabello ft. Young Thug was a Latino monster hit a few years ago, and as a result, literally, everyone recognizes its distinct off-beat rhythm. It’s a great song for beginners because the left-hand pattern just repeats. Perfect if you’re poolside with a piña colada 😉

Start with one of the most famous classical piano pieces of all time, Fur Elise by Ludwig Van Beethoven. It was composed over 200 years ago and dedicated to a lady called Elise (‘fur Elise’ means ‘for Elise’ in German). Who she was, we will never know, but it sure is a beautiful piece of music.

Sticking with classical piano music, next we Tchaikovsky’s Swan Lake Theme. Its slow tempo makes it pretty easy to learn, and most is done with the right hand (there’s not much to do with the left hand – only a couple of notes).

Finally, we had to include Bach’s Prelude in C Major. Slightly higher on the difficulty scale, the tune is divided between the hands, upping the difficulty level slightly. Your hands will have to get around the keyboard a fair amount, that’s for sure.

We hope you’ve enjoyed this list of piano songs for beginners. There should be something for everyone, whether pop is your thing, or you’re more into classical.

The important thing to remember if that every piano player started somewhere. We were all beginners once. As the great Zig Ziglar once said, “You don’t have to be great to start, but you have to start to be great.”.

Practice every day, and keep going. Start slowly, and build up to a faster tempo as you get more confident.