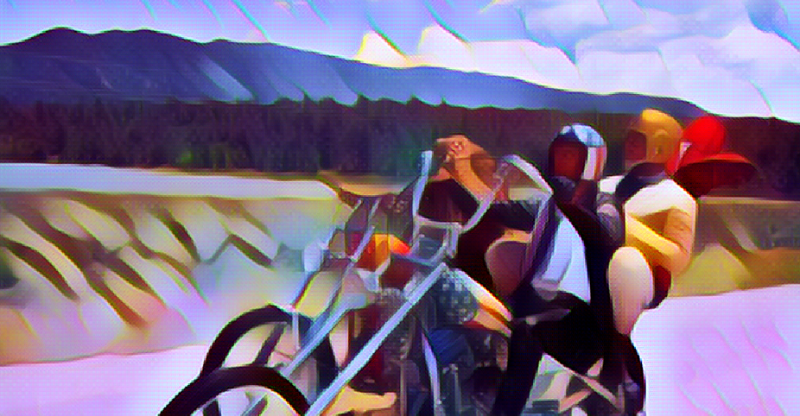 Easy Rider is a 1969 film about two bikers who hit the road to see the American South and Southwest, with money burning a hole in their pockets after a sketchy business transaction.

The Easy Rider soundtrack helps the characters depict their exploration of societal issues of the day, and the film has been described as a “touchstone for a generation” as the hippie movement went on the rise and communal lifestyles thrived.

Join the journey as you play the soundtrack, and try to resist the urge to buy a motorcycle to experience the freedom of the highway!

Written by Hoyt Axton, ‘The Pusher’ was popularized by the version of the song by Steppenwolf, recorded in their 1968 self-titled album. The song has been recorded by multiple other artists, including Nina Simone, Blind Melon, the Flaming Lips, and Deap Vally. The song accompanies the film’s opening scene, setting up the film’s premise as a sequence of deals goes down. The movie helps to create the design of a Biker Movie.

Born to Be Wild – Steppenwolf

Perhaps the most well-known song in the whole soundtrack, ‘Born to be Wild’ has gotten a lot of air since Steppenwolf originally recorded it for their debut album. The song was their third album single and helped launch them into fame. The song itself was featured in Easy Rider, depicting the counter-cultural lifestyle of bikers. The song is described as the “first” heavy metal song, marking the first use of the term in rock in the second verse, “heavy metal thunder,” even if the lyric is about a bike, not musical styles.

Related: Hear this classic on our list of good travel songs.

‘The Weight’ rolls through the soundtrack of Easy Rider as the three leads trek down the highway in the Southwest. Dirt mound after dirt valley drifts past as the trio ride along, easy and smooth. Interestingly, the song is about a man carrying a load of “strange people” he’s promised to check on for a friend, Fanny. The song itself never made it big, but you’re likely to know it well as you listen.

Related: Listen to more songs about hitting the highway with these car songs.

Written by Gerry Goffin and Carole King, ‘Wasn’t Born to Follow’ was recorded by the Byrds for their 1968 album The Notorious Byrd Brothers. The song celebrates the freedom experienced by the hippies in the late 1960s—an escape from conventional society. The counterculture of bikers and hippies regularly collide and merge in this film about freedom from convention and rules. The song is regarded as a country-rock melody with easy rock rhythms.

If You Want to Be a Bird – The Holy Modal Rounders

Recorded by the Holy Modal Rounders, an American folk music group, the song ‘If You Want to be a Bird/Wild Blue Yonder’ perpetuates the ongoing theme of the film Easy Rider. As the bikers continue their trek down the open road, the song suggests, “If you want to be a bird, why don’t you try a little flying? There’s no denying it gets you high. Why be shackled to your feet when you’ve got wings you haven’t used yet? Don’t wait for heaven—get out and fly.”

Related: Be free as a bird with the best flying songs.

Recorded by the same artist who gave us the well-known ‘Loco-Motion,’ this perky popular song, ‘Let’s Turkey Trot’ was written by Gerry Goffin and Jack Keller with Carole King. Little Eva released the song as her third single, and the song was selected for Easy Rider’s soundtrack. The song references the turkey trot dance step that was briefly popular half a century before the song came out. Ultimately, the song was actually removed from the film’s soundtrack album.

Don’t Bogart Me – Fraternity of Man

‘Don’t Bogart Me’ was recorded by the blues-rock/psychedelic rock group The Fraternity of Man of the 1960s. The song is their most famous and is featured in Easy Rider as the trio of riders contemplates their bond and adventures on the road. The song is a bit of a twangy, bluesy country-rock song that fits the scene’s mood as the guys camp out on the road.

American soul-rock band, The Electric Flag recorded the lively, rhythmic instrumental ‘Flash, Bam, Pow’ in the 1960s. The song initially appeared on the soundtrack from The Trip and then made its way into Easy Rider. The song was omitted from the film’s soundtrack, though, and has never been released as a part of the track. That doesn’t stop the amazing rhythm of the song from getting you to move. It’s infectious and nearly impossible to sit still when you hear it!

If 6 Was 9 – The Jimi Hendrix Experience

Written by Jimi Hendrix and performed by the Jimi Hendrix Experience, ‘If 6 Was 9’ was first released on the band’s second album, Axis: Bold as Love. The song is an acid-rock blues, with incredible, unforgettable guitar soloing by Hendrix. The song uses unique, innovative studio technology in recording, like stereo panning from left to right and vice versa, as well as slap echo, reverb, distortion, and fuzzbox – none of which were a thing back then.

Kyrie Eleison/Mardi Gras (When the Saints) – The Electric Prunes

The literal meaning of the Latin “Kyrie Eleison” is ‘Lord have mercy.’ The eerie version of this opening track of the Electric Prunes’ album Mass in F Minor became an underground favorite thanks to its placement in the unique scene of Easy Rider.

Written and performed initially by Bob Dylan on his album Bringing it All Back Home, the song found its way onto the Easy Rider soundtrack for its memorable imagery in the lyrics and the distinctly appropriate sound of the music. The lyrics fit the journey of the riders perfectly. “For them that must obey authority, that they do not respect in any degree; who despise their jobs, their destinies, speak jealously of them that are free. Cultivate their flowers to be nothing more than something they invest in.”

Related: Find the confidence to fight the power with these willpower songs.

With input from uncredited co-writer Bob Dylan, Roger McGuinn wrote ‘Ballad of Easy Rider’ for the film Easy Rider. It was originally released on the soundtrack for the movie as a solo performance and was later reissued as an alternative version with his band, The Byrds, a year later. David Fricke, the senior editor of Rolling Stone magazine, has described this harmonica-rich song as the perfect capture of the era’s mood, depicting “the weary blues and dashed expectations of a decade’s worth of social insurrection.”

Related: This song features on our playlist of river songs.