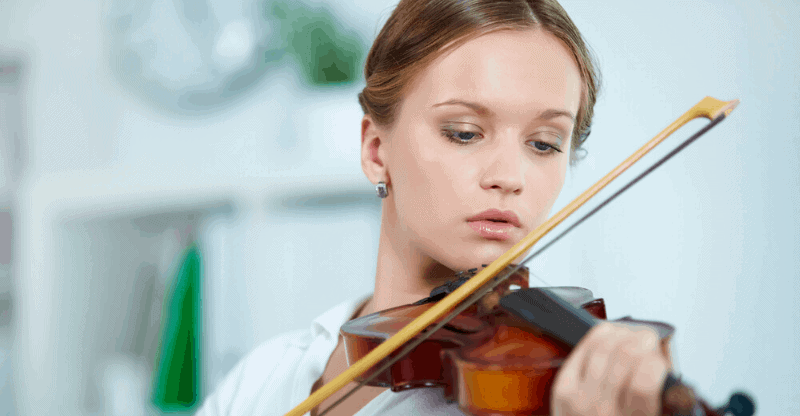 Learning any new skill is challenging, and learning the violin is no exception. You need correct posture and positioning, and if you can’t sight-read music, the violin is even more challenging.

But don’t be put off. Luckily, there are many violin songs that are easy enough for beginners that won’t require you to read music.

In this post, we’ve picked some great violin music for beginners. With a bit of practice, you’ll be pleasantly surprised how good you sound.

Greensleeves / What Child is This

This classical song is rumored to have been composed by Henry VIII for his second wife, Anne Boleyn, but is more likely of Elizabethan origin. Greensleeves was even mentioned in Shakespeare’s play The Merry Wives of Windsor in 1602.

However, the anonymous song is ideal for quickly learning to play the violin. It’s more of a traditional English folk song, but there are many parts, versions, and transpositions you can choose to follow. You can find backing tracks to play along with, or use plenty of videos online.

Practice the following eight measures for a full classical piece of music, complete with a few eight notes in the bridge.

Another popular classic, William Tell Overture was composed by Rossini. The music is rousing with a toe-tapping and upbeat sound. Use this song when you want to make people smile and dance with the beat.

It’s a fun song to play around with as well, but keep in mind that the bowings are tricky in this song. Master all the eights and ties, and you can sound incredible playing William Tell Overture.

Au Claire De La Lune is a class written using D major. It requires little to no previous violin skill to play, and violin instructors often use the song to help students learn or improve on simple key changes. This is the perfect popular song to encourage a beginner to learn the violin because it won’t demand too much.

For a music genre with cool violin songs, try bluegrass or jazz. Both genres hold American roots, as bluegrass first came about in the 1940s around the Appalachian mountain region according to the Bluegrass Heritage Foundation. Jazz is more urban, and the two styles often fuse together in various songs.

The following songs are perfect for beginner violinists, especially if those who enjoy these genres.

Many artists, from Joe Stuart to Bill Monroe, became famous from playing Li’l Liza Jane. It’s one of the most popular bluegrass songs of all time. This song is also ideal for beginners to play on the violin because it provides an excellent part to play.

Summertime by George Gershwin, written in 1934 for an opera called “Porgy and Bess,” is a jazz violin music classic.

The song quickly became the most recorded option and the ultimate jazz standard. It mixes jazz music elements and American 20th-century songs. Today, there are over 25,000 variations of the song you can use.

Traditional folk songs are often handed down throughout time by various cultures, often through oral tradition or from one singer to another. Popular folk tunes can tell a narrative story, and they’re often re-done by a well-known composer.

A Mexican folk song, this version of La Bamba was arranged by Christian Morris. The tune is upbeat and lively, with a few tuplet groupings and dramatic emphasis. However, it’s easy enough for beginners to show off their new violin skills and helps you improve your technique.

Johnny Cash wrote this traditional folk song to describe a fictional train. Today, Wabash Cannonball is one of the easiest songs you can play with a violin. If you can master this song, you will sound like a professional.

The ideal music for weddings is romantic and speaks of long-lasting love. These are some of the best violin songs for playing weddings.

American singer John Legend released this popular hit in 2013, and it quickly reached the number one hit on the top of the Billboard Hot 100 list by May of 2014. According to Smooth Radio, he co-wrote All of Me with Toby Gad with his now-wife, Chrissy Teigen, in mind.

The powerful ballad follows the key Ab major, with a quick tempo of 63 beats per minute. Start practicing All of Me early if you want to play wedding gigs or become the best modern violinist of your time.

If you hope to play the violin for a wedding, Wedding March by Mendelssohn is the best song to learn. It’s super easy to learn to play on the violin, as there are only two sharps in the song.

Add Wedding March to the repertoire of songs you can play, and your violin skills will quickly improve.

Christian music is designed for a church gathering or service, but you can play these songs to show your faith and boost your violin skills simultaneously.

If you’re looking for a well-known Christian song a beginner can play with the violin, look no further. Amazing Grace was composed in 1779 by English poet and clergyman John Newton, according to Biography.com. He wrote the song lyrics based on his personal experience, and although the song began as a poem, the lovely tune is still popular today.

Amazing Grace is easily the most popular violin song among Christians in recent years. Playing the song is more difficult than some of the other songs on this list. After you master the G major part of this song, you’ll sound wonderful.

When the Saints Go Marching

Once you learn to play Amazing Grace well, move on to this piece of music. This song is a Christian jazz composition with traditional gospel music. The half and quarter notes help you learn to maximize your bowing skills, and the tempo level is simple to adjust without altering the song’s overall meaning.

Do you have a young violinist at home? Perfect. These songs are easy enough for a young audience to learn, and produce beautiful and simple harmonies when played right.

Twinkle Twinkle Little Star is a popular bedtime song among children. It’s played often in music schools around the globe today. There are also many different ways you can play this song, from a solo performance to accompaniment play.

Mary Had a Little Lamb is a popular children’s nursery rhyme written in the key of D. It’s ideal to play on the violin because there are over fifty variations beginner students can use to train their fingers and bow. You can play the song with an orchestra, solo, or even in a different key if you want. The options are endless!

For He’s a Jolly Good Fellow

For a famous and fun kid-friendly song, For He’s a Jolly Good Fellow is a classic choice. It’s written in the key D major and contains a lively tune. Kids find this song easy to learn and practice. Plus, listeners can sing along as you play.

Christians and non-religious Americans alike adore Christmas. Play the following holiday songs to get into the season spirit or perform at a holiday party. Most of the options allow you to play alone, where you cover the melody as a solo.

Composed back in 1857 by James Lord Pierpont, Jingle Bells is the most sung Christmas carol around the globe today. The song may be difficult for you to play the first time, but with plenty of practice, beginners can pick up the hang of it in no time. It also works great as a duet for two violins.

Pop culture music is fun to master, as the popular tunes from movies get stuck in your head anyway. Play these songs when you want to entertain others. Expect your friends and family to hum along and have a good time.

If you have ever watched the popular TV series Game of Thrones, you know how catchy the opening tune is. The theme song is one of the most played and adored songs covers you’ll find violinists record themselves playing on the internet.

The music is inspiring and encourages beginners to learn a bit more. You’ll need to attempt a ton of left-hand finger gymnastics to play this song. However, you only need the D and G strings to play the Game of Thrones theme song on your violin.

Star Wars is one of the most popular movies of all ages. The theme song is iconic. It’s loved among sci-fi people around the globe, and you often hear it hummed, played, or tapped in public places. It’s also super easy for beginner violinists because it’s so repetitive.

Master the Star Wars theme song to show off among your sci-fi friends and family members, or simply have some fun. You’ll have all generations of your family tapping or humming to the beat.

Each one of these songs to play on violin is ideal for beginner violinists to learn and hone their skills.