6 Easy Economy Picking Exercises to Help You Nail This Technique 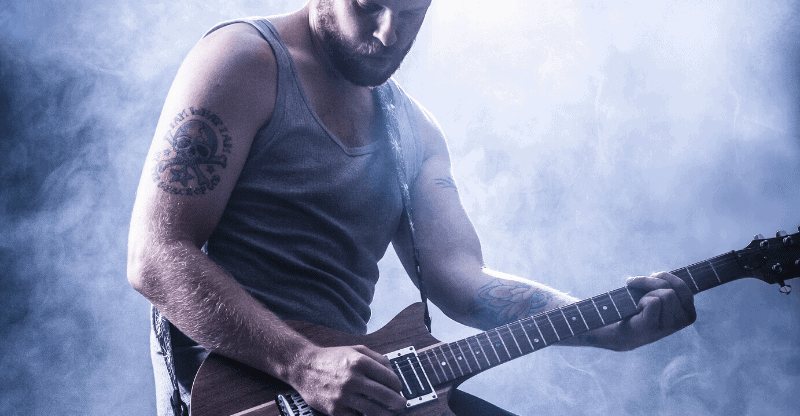 When you first start getting awesome at guitar, you often impress yourself and others with your fretting speed.

Using pull-offs, hammer-ons and perhaps tapping, you find you can play at the speed of light.

You hardly even need to use your pick at all!

However, relying on legato-based techniques like hammer-ons and pull-offs limits your playing.

The next step, after getting your fretting fingers up to lightning speed, is to train your picking hand to do similarly good work.

This is essential in shred metal, jazz and even a lot of hard rock solos.

There are a number of good picking techniques.

The technique we’re looking at today is a combination of both those techniques.

It’s fast, encourages accuracy and it’s pretty effortless (once you get the hang of it).

What is Economy Picking?

It sounds like a super-advanced complicated technique, but really it’s very simple.

Use the Tip of Your Pick

If you want to play fast (and you’re reading about economy picking, so I’ll assume you do), it’s important to use the very tip of your pick.

By this I mean, ensure the pointiest bit of the point is what strikes your strings.

Some players have a tendency to pluck their strings from about a millimeter or two up the pick, however, this neither produces a clear sound or helps your speed.

The slightest of touch with your pick will make your notes sound clear and will make it easier for your pick to move fast.

What About Pick Angle?

If you’re mixing alternate picking with sweeping, should you hold your pick straight, like you would when alternate picking, or at an angle like when you sweep? Surely it wouldn’t be fast to keep switching between both ways?

Well, you might think so, but the reality is that it’s faster to switch your pick’s angle slightly than it is to jump over a string with it.

In this example, we’re focusing entirely on our picking hand.

Before you try picking it using the suggested down and upstrokes, try doing it with alternate picking.

I’m guessing that would usually be your go-to when faced with a TAB like this.

Our second exercise is just like the first one, except reversed.

This will get you used to two upstrokes in a row when playing strings next to each other.

It’s amazing how quickly this technique gets you playing faster. When you nail it, try joining the first and second exercises together.

You might recognize what you see; it’s the A Natural Minor Scale.

It’s likely that you’re so used to alternate picking this scale, it will feel weird to switch to economy picking.

However, it works really well; playing three notes per string lends itself to this technique, as you can see by the convenience of the double down-strokes.

Exercise 4 introduces pull-offs into the mix.

But you thought I said pull-offs were limiting? Well, they are, of course, if you use them in isolation.

However, combined with economy picking, pull-offs can lead to super-fast, stylish sounds akin to the classic ‘Sultans of Swing’ solo.

The final exercise combines ascending and descending patterns of the A Natural Minor Scale.

Its changing directions means that you’ll sometimes end up doing a double-down or two upstrokes in a row, but this is realistic in guitar solos.

Economy picking doesn’t have to be used constantly, just wisely.

If you’re really loving economy picking, and want to try out something a bit more advanced, here’s an Eric Johnson lick, taken from ‘Cliffs of Dover’.

Here, I’ve missed off the downs and ups, so you can interpret it how you like. You’ll see when it makes sense to economy pick, and when it’s appropriate to do alternate picking. Enjoy!

Economy picking is a technique that can really make your life easier.

By combining alternate picking and sweep picking, you get the best of both worlds and it can boost your speed massively, especially when moving between strings.

Physically, it takes less time to perform one action (i.e. a sweep), than it does two (i.e. alternate picking).

While exercises are a great way to get used to the method, the best way to become a master of economy picking is to use it when appropriate in your own solos.

You might already be a decent alternate picker, but this trick offers the same clarity while giving you the speed you’ve gawped at in the hands of so many shredders.

The only downside of economy picking is its ability to knock your guitar gods off their pedestal.

So they’re not super-human, after all!