30 Famous Ukulele Players, Past and Present 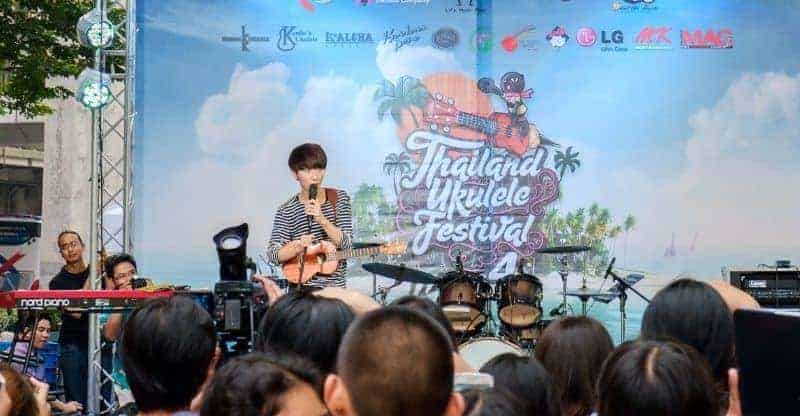 Most people can recognize the sound of the ukulele.

But ask the average person on the street to name some famous ukulele players and they’ll do well to name even one!

That’s such a shame. There are some fantastic players who are true artists of their craft and adored by fans, but pretty much unknown outside ukulele circles.

To right that wrong, here’s our pick of the best players, both past and present.

Without question one of the most famous ukulele players out there, Jake Shimabukuro has made his name for the complexity of his finger work. He shot to online fame back in 2006 when his renditions of “While My Guitar Gently Weeps” was shared on YouTube without his knowledge. Shimabukuro was the subject of a 2012 award-winning documentary. Anyone who can perform Bohemian Rhapsody to this standard gets a big thumbs up.

James Hill has 100,000 subscribers on YouTube, many of whom benefit from his online ukulele lessons. Together with John Chalmers Doane, the Canadian musician created the “Ukulele in the Classroom” program back in 2008 and has traveled the world with his profession. It is extremely rare to see Hill make a concert appearance without conducting a ukulele workshop, such is his passion for the instrument.

Famous for winning America’s Got Talent at the age of 12, Grace VanderWaal shot to fame when she performed an original song called “I Don’t Know My Name”. Howie Mandel, a judge on the show, pressed his “golden buzzer” to automatically send her through to the quarter-final, with Simon Cowell labeling her the “next Taylor Swift”. VanderWaal has starred in a Disney+ musical drama film called Stargirl, as well as touring with the likes of Florence and the Machine Imagine Dragons.

The late, great Eddie Kamae was one of the founding members of the group Sons of Hawaii and enjoyed a career spanning eight decades as a ukulele player, singer, composer, and film producer. Passing away in 2017 at the age of 89, Kamae is without doubt an inspiration to modern-day ukulele players.

Otherwise known as “The Fearless Eyed Man”, Israel Kamakawiwo’ole was a Hawaiian singer-songwriter and sovereignty activist. His version of “Somewhere Over the Rainbow” from his “Facing Future” album has appeared in TV shows and films, perhaps most famously in Adam Sandler and Drew Barrymore’s 50 First Dates. He passed away in 1997 from respiratory failure.

If you are nicknamed “Ukulele Ike”, you find your way onto this list. Cliff Edwards introduced the classic “Singin’ in the Rain” in the Hollywood Revue of 1929. Edwards taught himself to play the ukulele as a young man, and also voiced Jiminy Cricket in the 1940 classic Pinocchio.

No, we aren’t talking about the character in Charles Dickens’ “A Christmas Carol”. Tiny Tim, birthname Herbert Butros Khaury, was an American singer and ukulele player, best known for his cover of “Tiptoe Through the Tulips”. He played the ukulele left-handed, but the guitar right-handed. Quite the skill.

Once the UK’s highest-paid entertainer, George Formby was a man of many talents. An actor, comedian, and singer-songwriter, the Wigan man is said to have performed in front of three million service personnel during World War II. As recently as 2019, two of Formby’s ukuleles sold for almost £24,000 at an auction.

Amanda Palmer is a New Yorker and lead vocalist of The Dresden Dolls. Also well-known for her solo work, Palmer actually began performing with the ukulele in a comedic way, but soon incorporated it into her shows. She would go on to record an entire album using the uke as a lead instrument.

Born in 1900, Roy Smeck earned himself the nickname “The Wizard of the Strings” due to his unquestionable skill on the ukulele, guitar, and banjo. His vocals weren’t particularly strong, but Smeck more than made up for that with his ability on string instruments. He developed novelty dances and tricks as part of his act, and could even play the ukulele with his teeth.

Three years before her death in 2008, Genoa Keawe deservedly received an honorary doctorate from the University of Hawaii. Many artists from Hawaii credit her as an influencer, and she made a name for herself performing at officers’ clubs prior to World War II.

Frank Crumit is best-known for becoming the first person to play the ukulele on Broadway when appearing in “Betty Be Good” in 1918. Crumit is credited with recording over 50 songs in total, with “The Gay Caballero” and “Abdul Abdulbul Amir” selling over four million records.

Bette Midler is something of a household name, and has enjoyed a career spanning six decades. She was actually born in Hawaii and starred in Fiddler on the Roof in the 1960s. Her hit songs include “Wind Beneath My Wings”, “The Rose” and “Do You Want to Dance”. Midler signed a performing residency contract with Caesars Palace in Las Vegas in 2008, and has won four Golden Globe Awards, three Grammy Awards and two Tony Awards.

Another famous ukulele player born in Hawaii, Peter Moon was a founding member of The Sunday Manoa. With several albums released across a number of decades, Moon was inducted into the Hawaiian Music Hall of Fame in 2007.

With nine albums to her name, Ingrid Michaelson first became known in music circles with her 2005 debut “Slow the Rain”. She has had two singles reach the Billboard Hot 100, with “The Way I Am” and “Girls Chase Boys” reaching number 37 and 52 respectively. She co-wrote the song “Parachute”, which was covered by Cheryl Cole on her “3 Words” album.

Famously part of Rock and Roll Hall of Fame band “The Cars”, Greg Hawkes originally started as the keyboardist for the band. Since 2001, Hawkes has switched to the ukulele and has even released an album called “The Beatles Uke” where he samples 15 classic Beatles hits.

After learning to play the ukulele at the age of three, a music career was destined for Herb Ohta Jr. He is also known as “Ohta-San” in Japan – a title of respect. He was inducted into the Ukulele Hall of Fame in 2006, so simply had to make this list.

Formed in 2009, Twenty One Pilots have gone on to create five major albums, and have headlined tours around the world. Lead vocalist Tyler Joseph is known to play the ukulele alongside other instruments such as piano, keyboard and synthesizers.

Peter Sellers is best-known for his roles as Inspector Clouseau and Dr. Strangelove in the Pink Panther series, but also embarked on a successful singing career. His songs contained a comedic value and he covered classics such as “When I’m Cleaning Windows” and “Ukulele Lady”.

Best-known for their stellar acting careers, Zooey Deschanel and Joseph Gordon-Levitt delighted their fans back in 2011 with a rendition of Nancy Wilson’s “What Are You Doing New Years Eve”. Both are major Hollywood stars, giving great exposure to the much-loved instrument.

Another actor with links to “The Pink Panther”, Steve Martin is best-known for films such as Father of the Bride, Cheaper by the Dozen and It’s Complicated. Back in 1979, he performed “Tonight You Belong To Me” with the ukulele alongside Bernadette Peters in the film The Jerk.

Julia Nunes is another artist who has seen her career spiral as a result of viral YouTube videos. She sings harmonies while performing with the ukulele, guitar and piano. Nunes has also covered the Bruno Mars hit “That’s What I Like”.

A famous endorsement for the ukulele saw Marilyn Monroe try her hand as Sugar Kane singing “Runnin’ Wild” in the movie Some Like It Hot.

Many famous actors aren’t afraid to try their hand with a musical instrument, and Ryan Gosling is no different. The movie star can be seen serenading Michelle Williams in the 2010 romantic hit Blue Valentine.

Jason Robards was an American actor who is one of only 24 people to win the “Triple Crown of Acting” – an Academy Award, Emmy Award and Tony Award. A man of many talents, Robards also plays the ukulele in the 1965 film A Thousand Clowns with a rendition of “Yes, Sir, That’s My Baby”.

Eddie Vedder is kind of a big deal. In a poll compiled by Rolling Stone, the Pearl Jam lead vocalist ranked at number seven in the Best Lead Singers of All Time. His talent goes beyond vocals, and in 2011 he released his second solo album “Ukulele Songs”. The first single released from that album, “Longing to Belong”, received widespread acclaim.

Is there anything that The Beatles can’t do? Ringo Starr, accompanied by Paul McCartney and George Harrison, casually plays the ukulele in their version of “Ain’t She Sweet” like he has played the instrument from birth.

As previously mentioned, Lancashire-born Andy Eastwood taught comedian Frank Skinner to play the ukulele for the 2006 BBC One show, Play It Again. Skinner put his skill to good use, performing the song “Oh Oh Oh Oh Osama Bin Laden” as part of his stand-up tour.

In a fitting way to end our list, entertainment legends Kermit and Miss Piggy took to the ukulele with a version of “Ukulele Lady” in season two of The Muppet Show. Joined by some of their legendary friends, the pair make a great job of professing their love for each other.