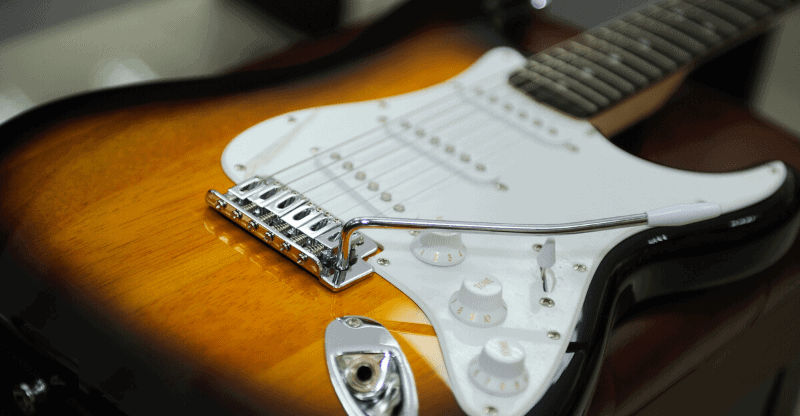 In this short Fender Stratocaster history lesson, we walk you through the main developments since its release in 1954 until the present day.

The Fender Stratocaster, simply known as the ‘Strat’, has unquestionably been the most influential and iconic electric guitar ever made.

The Telecaster and Gibson Les Paul come a close second, but no other guitar has made quite the same impact since it’s release in 1954 (heralded at the time as a design masterpiece).

It wasn’t always plain sailing for the Strat, however, and it certainly had its fair shares of ups and downs along the way.

Ready for a trip down memory lane? Here we go.

What Was So Unique About the Strat?

Before we look at its major developments, what was so special about this design?

First of all, it looked utterly different from anything else at the time.

We’re so used to ‘far out’ guitar designs that the Strat looks, by today’s standards, pretty conservative by comparison – but back in the day it was a real head-turner.

The Shadow’s frontman Hank Marvin said, “The Stratocaster was like something from space; really, it was so futuristic in its design.”

The double horned body nobody had seen before, nor the straight headstock which – although it changed over the years in size – contributed to the Strat’s tone.

The Strat comes armed with three single-coil pickups in the neck and bridge positions, plus a less common middle pickup for extra versatility.

It has one knob for volume and two knobs for tone – its close sibling, the Telecaster, only had one knob for tone. To get to the electronics for these pots you need to remove the pickguard.

The biggest bit of innovation, however, was the guitar’s vibrato bridge (which Fender erroneously called a ‘Tremolo’ bridge). This allowed the musician to perform huge dive bombs and pitch changes.

From its release in 1954, the Strat has under-gone a boatload of changes to its anatomy over the years, such as:

So where did it all start? The beginning of the road for the Stratocaster was 1954, when Leo Fender along with George Fullerton and Freddie Tavere, after many iterations settled on the now-familiar Strat design with its double-cutaway body.

The very first Strat had a single-piece maple neck with a thick U profile (known also as a ‘D’, a 7.25” radius fingerboard neck, bolted to a single-piece body made of ash, with a two-color sunburst finish (the only finish available at the time).

If you manage to find a ‘54 Strat, you’ve done very well as they’re rare as hen’s teeth and sell for a small fortune.

Other than a few cosmetic changes, the ‘55 model remained pretty much unchanged other than some improvements to build quality. They also shaved off some weight too, making it slightly easier to carry.

First up, they changed their finishing process, namely, the yellow tint that was used in the sunburst finish was now dyed into the wood rather than sprayed on. They also changed the body tonewood from ash to alder in their sunburst models (the blonde finish stuck with the ash).

They weren’t quite done yet. More changes saw the introduction of a soft-V neck shape instead of the U profile. The round string tree was also replaced with a butterfly style string tree.

Among Strat connoisseurs, the ‘57 model sunburst finish is considered a vintage thanks to the V-shaped neck.

In 1958, they went back to the U-shaped neck and they slightly tweaked the sunburst finish (from two to three colors).

In 1959 the biggest change was the introduction of a Brazilian rosewood fretboard. The pickguard also changed from white to a 3-layer celluloid one. The neck was also thinned out.

In the early ‘60s, they introduced a thinner profile C-shaped neck (called a modern “C” or flat oval) that impacted the sound quite a bit, making it less bright.

Then came a seismic change to Fender which changed the design of all their guitars forever. They were bought out by CBS.

Unfortunately, this led to a period of cheapening the materials, including:

Most notoriously, they introduced a large headstock design which allowed for a larger logo text (to make the Fender brand was more prominent on TV promotional campaigns and billboards).

Many purists hate the large headstock, but in actual fact, the larger look was designed by Leo Fender just before he passed away.  Some of the earlier models supposedly had problems with neck twisting which the larger headstock supposedly helped to deal with. In addition, two of Fender’s other guitars (the Jazzmaster and Jaguar) both shipped with the larger variety, so it appeared to be the direction of travel in Fender at the time.

Towards the end of the 1970s, they also brought in a 5-way pickup switch rather than the standard 3-way one.

In 1985, a wonderful thing happened. The employees at Fender, led by Fender President William C. Schultz, purchased the company back from CBS. “This is an opportunity to keep a very viable and legendary name alive in the industry” Shultz said.

One of the best things they did was reissue some of the greats from the pre-CBS era. There are vintage reissues (replicas of the 1957 and 1962 models), artist signature models, deluxe models and superb custom shop models.

Which are the Best Years for a Fender Stratocaster?

As you can see the world of the Stratocaster is pretty vast, which can make it hard to decide which is best one for you. Overall, there’s no correct choice, however, models do vary throughout the years.

It’s generally considered that the pre-CBS Strats are far superior in every way to the CBS era ones. Getting hold of one will be out of most people’s budgets.

Despite what people say about the CBS era ones, they’re still amazing guitars which fetch a hefty price tag because of their age, even if Strat purists turn their nose up to them.

If you want the best of both worlds – a Strat modeled on the pre-CBS ones but affordable, I’d suggest you check out modern ‘vintage’ Strats.

Besides vintage reissues, modern Strats offer a variety of different features and tonewoods and most have a thinner C neck for improved playability. The modernized tremolo pickup is superior even to the original design, which makes the bridge more stable which will go out of tune less frequently.

We hope you’ve enjoyed this little romp through the history of the Strat.

Here’s a cool video showing you the process of building one. Enjoy!