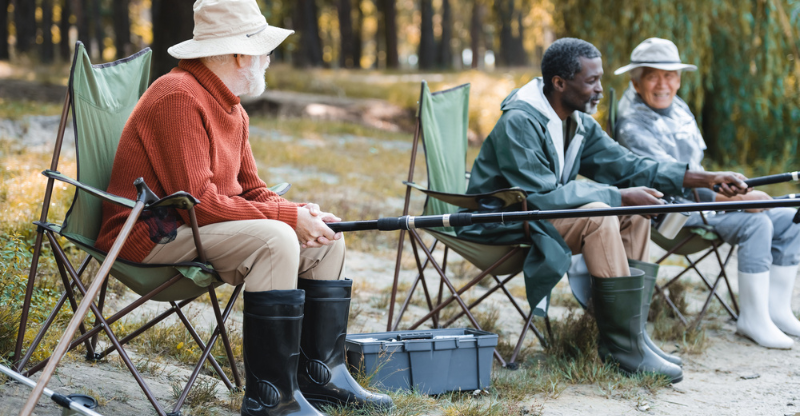 Country music is full of songs about fishing.

The serene activity is more than just a fun day spent on the water for most country artists and songwriters. Fishing reconnects people to their faith and philosophical view of the world. Many times, it’s how fathers bond with their children. And like Nitty Gritty Dirt Band’s ‘Fishin’ In The Dark,’ it can get pretty romantic, too.

From the 1980s to the present day, check out this decades-spanning list of our favorite fishing songs.

One of the country music genre’s most popular songs of all time, Hank Williams, Jr. released his hit ‘A Country Boy Can Survive,’ in 1982. The son of country star Hank Williams, songs like this one contributed to Hank Jr.’s own enduring legacy separate from his father’s. The song celebrates the self-reliance of rural life and criticizes the expansion of city districts in America.

Related: This song features on our playlist of top old country songs.

Country star Luke Bryan’s remedy for a stress-free life? ‘Huntin’, Fishin’ and Lovin’ Every Day.’ Bryan wrote it with the supergroup trio, The Peach Pickers, while on tour. With a more classic country sound to the production, Bryan also added a few biographical location markers in the song, including Flint River, the body of water that runs through the small Georgia town of Leesburg he grew up in.

Written with longtime Nashville songwriter Rhett Akins (father of country singer Thomas Rhett) and his producer Jeremy Stover, Justin Moore was inspired to pen ‘Bait a Hook’ while they were chatting about a friend of theirs who refused to go out with a super bowl winning quarterback. Stunned, one of them asked her why and she comedically replied, “He can’t bait a hook.”

Up Down – Morgan Wallen

A song celebrating a day on the water fishing, watching your bobber go, ‘Up Down,’ fellow country singer Hardy had a hand in writing this track with Morgan Wallen. The setting takes place in small-town America, where there’s not much to do on the weekends except cast a line, and that’s perfectly okay with the main character who says in the chorus, “We got what we got, we don’t need the rest.”

Buy Me a Boat – Chris Janson

The age-old saying “money can’t buy happiness” is the topic of Chris Janson’s chart-topper ‘Buy Me a Boat.’ The songwriter uses comedic wit to delve into all the ways winning the lottery would fund his beloved fishing habit, including “a brand new rod and reel” and a Yeti cooler to round out his days spent on the water.

Related: What would you buy with a lot of money? Check out these songs about wanting money.

Country singer Trace Adkins has always had a close relationship with his daughters. Many of his tracks, including one of his biggest hits, ‘You’re Gonna Miss This,’ draw on his family life which has always been a top priority. For his moving single ‘Just Fishin’,’ he sings about taking his daughter fishing where “she’s doin’ almost everything but sittin’ still.” To his little girl, it’s just a few hours spent trying to catch dinner, but to Adkins, these moments are lasting memories he’ll never forget.

Related: Here are the best songs about your kids.

Shut Up and Fish – Maddie & Tae

Country songwriting duo Maddie & Tae love to go fishing. When two guys invited them out on the water one day, they didn’t realize they had other intentions. While Maddie and Tae were hard at work baiting hooks and casting lines, the two guys were trying to have a romantic date with them. All the boys’ talking scared the fish away, and they never caught anything. But they got a good song out of it, so thankfully, the duo’s time wasn’t totally wasted.

One of Little Big Town’s more swampy tracks, their impeccable four-part harmonies are in full swing with their hit ‘Boondocks.’ As they reminisce about growing up in a house with a tin roof at the end of a gravel road, the group tells listeners though they’ve since moved on, it’s where they keep their “heart and soul.” The single finishes with an expertly executed vocal round, with each member taking a different lyrical part and blending them all together until the track fades out.

Known for his parodies of hits like ‘Dust in the Wind,’ Tim Hawkins’ best-known comedic remix features Carrie Underwood’s hit song ‘Jesus Take the Wheel.’ Rewritten to focus on a day of fishing with his buddy Cletus, the waters get choppy when Hawkins pulls a muscle. He calls out to his friend for help, which ushers in the hilarious play on words, “Cletus, take the reel!”

Related: Our funny songs list is sure to make you laugh!

Romance is at the heart of Craig Campbell’s single ‘Fishing,’ off his debut self-titled album. The main character in the song is dating a girl he’s trying to impress, so he takes her out on the water to do some fishing. In the same vein as Nitty Gritty Dirt Band’s ‘Fishin’ in the Dark,’ the creative song is full of melodic prose and plenty of double entendres that will entertain listeners.

The protagonist in this Outlaw single creatively declares even though he can’t “catch a break” at work, he can “catch a fish.” The song is another solid addition to country music’s long line of stories about casting your troubles away by casting a line. Other artists like Steve Azar have covered this treasured motif with hits like ‘I Don’t Have to Be Me (‘Til Monday).’

Though ‘Dirt Road’ wasn’t one of Kip Moore’s top hits, it’s a deeply layered song worth a listen for anyone who appreciates classic country writing. The contemplation of Moore’s faith is at the core of the track, with his approach to one’s relationship with a creator being more transcendental than the traditional outlook he grew up learning. The chorus relates his vision of heaven to evenings spent with his significant other. He says, “unless it’s got a dirt road leading down to a fishing hole,” he doesn’t want to go.

Related: These songs about being on the road are perfect for traveling on dirt or paved roads.

A summer-y hit perfect for poolside playlists, Chris Lane’s ‘Fishin” finds the country singer wooing the girl of his dreams by offering to take her out on the water. A budding romance turns into something more in the easy-going, beachy track, with Lane singing lyrics like “Girl, you got me hook, line, and sinker.”

Appearing on John Prine’s 1978 album, Bruised Orange, the folk songwriter laments everyday life with his autobiographical track ‘Fish and Whistle.’ Written after he had a particularly bad day, Prine recalled a prayer from his youth that older people would say when things weren’t going his way, which involved a “fish and whistle” saying regarding the Bible. The lyrics read like the classic literature of Ernest Hemingway or John Steinbeck; the story is to the point but deeply meaningful upon further inspection.

A slang term representing a double entendre in southern culture, Nitty Gritty Dirt Band gets cheeky with their third hit single from the ’80s, ‘Fishin’ in the Dark.’ The couple in the song takes their relationship further during a romantic night spent on the water “counting the stars.” This number-one single in both the US and Canada became the band’s signature track.

Related: Splash around with the best water themed songs.

Though Cody Webb grew up on Lake Murray in South Carolina and knows the ins and outs of fishing well, his song ‘Jon Boat’ tells the fish in the water “to have no fear” because he and his crew are out on his boat to party. Another summertime song perfect for waterside playlists, Webb’s epic party skills are front and center in the lyrics as he sings, “It’s bout to go down, down at party cove.”

“Don’t wanna look back at all the things I’m missing and wake up wishin’ I spend more time fishin’.” Thomas Rhett’s ‘More Time Fishin” plays out a bit more poetically than Johnny Paycheck’s ‘Take This Job and Shove It,’ but the sentiment is the same for both songs. The opening of this track finds Rhett impulsively taking a personal day by giving the finger to his job as he passes by work and heads straight to the water.

Catch All the Fish – Brad Paisley

Country star Brad Paisley orchestrates one heck of a boys’ weekend with his tune ‘Catch All the Fish.’ The opening verses feature him at the store filling up shopping carts with “fishing gear” and “Miller Lite.” After picking up his friends, they head to the water, but phone calls start coming in with concerned wives asking if they’ll behave while they’re gone. They make no promises. Their objective? “Catch all the fish” and “drink all the beer,” no matter how long it takes.

Related: Save these songs for the good times in your life.

This poetic track finds Chris Rea contemplating how one should live their life, with the peaceful act of fishing as his mind’s catalyst. It causes the singer to realize some pretty big life lessons. Rea realizes if you spend your life trying to please everyone, you’ll lose yourself, and “you’ll never be free.” His solution? Cast a line, take some “me” time, and go fishing.

In the early ’80s, country outlaws Willie Nelson and Merle Haggard famously teamed up for a historic recording project. Besides the album’s popular self-titled single ‘Poncho & Lefty,’ the duo also included ‘It’s My Lazy Day’ on the track listing. The song is about curing your worries and troubles by finding a road leading to a body of water. Though it might be “a mighty long way,” a little time spent riverside is good for the soul.

Related: Sit back and enjoy the best songs about doing nothing.

Many country songwriters take on a witty, jovial approach when writing tracks about fishing. It’s hard not to do when it’s one of your favorite extra-curricular activities. But for Erik Dylan, writing a fishing song meant taking on an entirely different songwriting approach. ‘Fishing Alone’ is emotionally powerful, and it draws on regret over not spending more time with loved ones before we lose them.

Related: Head over to our songs about making mistakes playlist.

Ever since 2006, country songwriter and performer Eric Church has maintained an endlessly busy schedule, scoring hit after hit while extensively touring. His tune ‘Livin’ Part of Life’ speaks to his desire to break away from it all at times to go fishing and have a moment of relaxation before reality sets back in.

Featured on his 2012 This Ole Boy album, Craig Morgan’s playful ‘Fish Weren’t Bitin’ boasts a cheeky plot twist towards the end of the song. The story revolves around a young couple out on the water who end up paying more attention to each other because the fish aren’t paying attention to their hook. Why aren’t the fish biting? Listen to the end to find out the lover boy’s clever trick.

A longtime fisherman, Billy Currington, talks about how his worst day fishing is still better than a day spent doing anything else with ‘Bad Day of Fishin’.’ The track appears on his album Enjoy Yourself, which purposely features many of his favorite Nashville songwriters. This song is the only tune Currington helped co-write for the album.