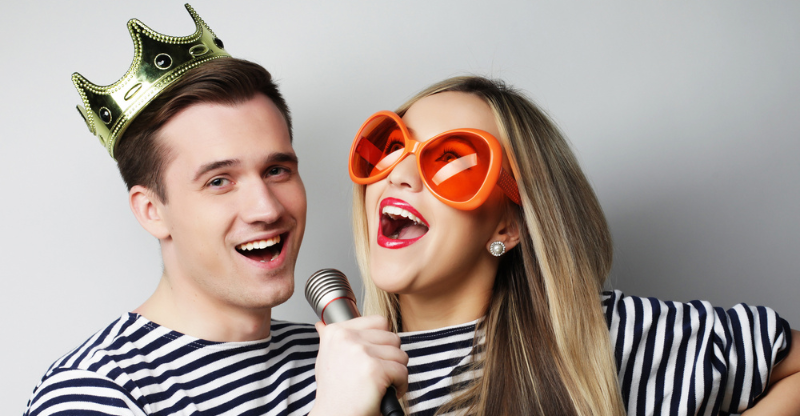 Funny songs are the way to go if you want to make your karaoke crowd laugh. Everyone will be in for a memorable time when you get on the stage and flex your funny bone.

Are you looking for humorous songs for your next karaoke night? You’ve come to the right place! Here are some funny karaoke songs to get everyone laughing.

Here’s a hilarious track about being too attractive for just about everything in life, though the members of Right Said Fred have said it took more brainpower to write than listeners may imagine. If you have a great sense of humor with a dose of self-confidence, this is a great choice for your next karaoke performance. Most people will agree that it’s one of the funniest karaoke songs!

The music from this classic samples another classic track, ‘Super Freak’ by Rick James, though its fans likely didn’t know the earlier hit at its release. If you love old-school 1990s rap, this track will get everyone on the dance floor at karaoke, as it is focused on its own beat that “you can’t touch.”

Related: Here are the best songs to dance to.

Baby Got Back – Sir Mix-A-Lot

This controversial track sounds superficial at first, but it helped diversify the portrayal of women’s bodies and Black women’s roles in society after its release in 1992 when Sir Mix-A-Lot’s girlfriend was having trouble finding modeling and acting work. Even with its more serious effects, it can be sung as a fun karaoke song appreciating a woman’s physical attributes.

Related: Feel good about yourself with these loving yourself songs.

If you want to celebrate your day off in a fun way at karaoke, this iconic song about enjoying a party over the weekend is a great way to do so. It samples Queen’s ‘Under Pressure,’ even though the subject matter—which was based on a real fun-filled weekend—is totally different from Queen’s earlier hit. This is one of those karaoke songs that most people will be able to sing along with.

Related: Hear this song on this list of the best songs with baby in the title.

This track was inspired by the film The Color Purple and a real-life club in Georgia called the Hawaiian Ha-Le. The song celebrates partying, gathering with people from all walks of life, and using fun to create a harmonious environment. Its sound elaborates on that light and fun element that’s perfect when you want to sing karaoke.

Related: This song features on our playlist of the best sing along songs.

This is How We Do It – Montell Jordan

Montell Jordan keeps it simple in this track: it’s all about how the protagonist and his friends have a good time partying and make sure to party the right way every time. The song has had numerous pop culture appearances and is sure to be a fun hit on karaoke night.

Related: You can find this song on our playlist of walk up songs.

Here’s a quirky, dance-fueled tune that pokes fun at the ideal “Barbie doll” lifestyle and is one of the most loved hilarious karaoke songs. This was one of Aqua’s biggest hits and a great example of late-1990s music, so expect to hear a few laughs and provoke plenty of nostalgia when you sing it on stage at your next karaoke night.

Related: Sing along with our 90s karaoke songs playlist.

‘White And Nerdy’ is a parody of ‘Ridin” by Chamillionaire. The song pokes fun at nerdy white guys who think of themselves as tough guys. Weird Al Yankovic has claimed that his own nerdiness inspired the track. If you’re ready to embrace your nerdiness on stage, this song’s for you.

My Humps – The Black Eyed Peas

In this Black Eyed Peas hit, Fergie sings as a self-confident woman who uses her physical appeal for her own gain, even if she gets irritated by their advances at times and threatens to “start some drama” if men harass her. Will.I.Am joins in to create a duet.

This song is all about a kid who has a crush on his friend’s mother. A real-life situation inspired it: Fountains of Wayne songwriter Adam Schlesinger’s friend had a crush on Schlesinger’s grandmother. It was a very popular track after its release and is sure to be a funny karaoke song.

Related: See similar songs on our playlist of songs with women’s names in the title.

Jimmy Buffett’s conversation with a real-life, modern-day pirate inspired this song. The pirate is about to turn 40 and is afraid his profession is dying. The song is relatable to anyone getting older and wondering what changes might—or should—occur in life.

It Wasn’t Me – Shaggy

The protagonist of this ultra-popular reggae song—portrayed by Rikrok—got caught cheating on his girlfriend and goes to his friend Shaggy for advice on handling the situation. All he tells him is to deny the wrongdoing no matter what, which Rikrok eventually realizes won’t work. Despite its dark side, this track always smiles at listeners’ faces with its absurdity.

Related: Head over to our songs about cheating playlist.