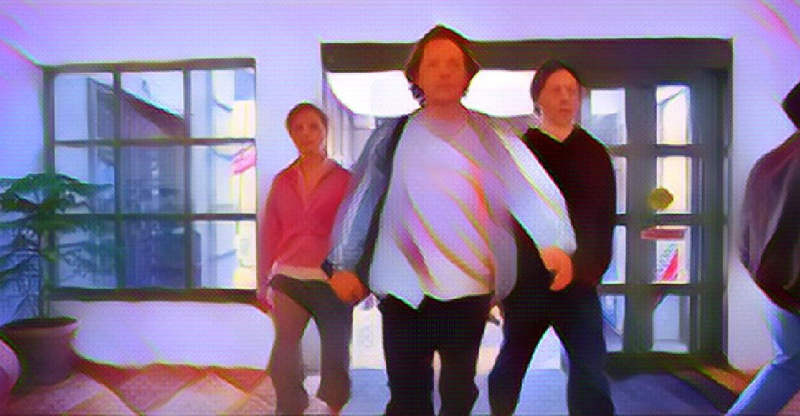 Zach Braff wrote, directed, and starred in his 2004 film Garden State. Autobiographical in nature, it follows the story of Andrew Largeman as he makes his way home to New Jersey for his mother’s funeral.

Zach had a heavy hand in picking the music for the movie’s soundtrack. His excellent musical taste even won him a Grammy for the film score.

The Garden State soundtrack is heavy on alternative rock and indie artists. Take a listen to the moody song selection below.

Coldplay frontman Chris Martin wrote ‘Don’t Panic’ as a ballad about the world’s end. Its doomsday feel went perfectly with a pivotal scene in Zach Braff’s Garden State film when he receives tragic news about his mother. As he processes his emotions, he stares into a bathroom mirror, and ‘Don’t Panic’ is heard in the background.

Caring is Creepy – The Shins

Despite ‘Caring is Creepy’ having designated “fan-favorite” status in the Shins crowd, the song was never actually released as a single. The song gained even more popularity, though, when Zach Braff hand-picked the song for the soundtrack to his autobiographical film Garden State. The song plays in the movie when the main character is riding around in a motorcycle but gets pulled over by a classmate-turned-cop.

Related: If you want more songs about motorcycles, you’ll like these songs from Easy Rider.

In the Waiting Line – Zero 7

Tackling the issue of depression with beautiful instrumentation and metaphorical lyrics, this hazy and moody track can be heard during a scene in the 2004 film Garden State when protagonist Andrew experiences a high like never before while experimenting at a party. The song also appears on Zero 7’s 2001 album Simple Things.

“You gotta listen to this song. It’ll change your life.” Alternative rock band, The Shins, scored a couple of different placements for their songs in the 2004 indie film Garden State. ‘New Slang’ can be heard through headphones when protagonist Andrew (played by Zach Braff) is convinced by his love interest Sam (played by Natalie Portman) to listen to this Shins tune while they are waiting in a doctor’s office.

Part of Zach Braff’s storyline in his self-directed film Garden State involves him getting to know the mysterious, quirky Sam played by Natalie Portman. Colin Hay’s ‘I Just Don’t Think I’ll Ever Get Over You’ plays in one scene as Zach’s character Andrew makes his way home from Sam’s house. Hays wrote the tune after a long bout with alcoholism that cost him his marriage.

Cause blues eyes, you are all that I need.’ This Cary Brothers tune from the mid-1970s was the first one to put the band on the map. The tune evokes mystery and romance and plays as source music during a restaurant scene in Zach Braff’s 2004 film Garden State. In the song, the subject of “blue eyes” takes on many different meanings, including sadness, a possible love interest, and failed relationships.

It’s hard not to love Natalie Portman’s character Sam in the film Garden State. During one scene, as Remy Zero’s ‘Fair’ plays, she is pretending to tap dance for protagonist Andrew in front of a fireplace. The song deals with a failed relationship and a person trying to come back to a love that has been lost due to time apart.

Related: If you’ve lost a love, listen to these lost love songs.

One of These Things First – Nick Drake

A song that goes hand-in-hand with main character Andrew Largeman’s lifelong struggle with identity in Zach Braff’s film Garden State, Nick Drake uses simple piano, guitar, and image-heavy lyrics to sing about what could have been. ‘One of These Things First’ initially appeared on Drake’s 1971 album, Bryter Layter.

This 1998 single re-released by the band in 2000 made it into the Garden State movie during a scene in which main character Andrew and his friends are out and about and end up in a store. The song’s title is a slang term to cover up the fact that it’s about smoking. The title makes a direct reference to the particular type the band enjoys.

The Only Living Boy in New York – Simon & Garfunkel

Songwriter Paul Simon originally wrote this tune when his writing partner Art Garfunkel was headed to Mexico for an acting gig in a movie called Catch-22. It appears on the duo’s last album, the 1970 release Bridge Over Troubled Water. The song can also be heard in an emotional scene in the indie film Garden State when protagonist Andrew and his friends are positioned on top of rocks and screaming into a ravine. Good times!

Related: This song is also on our list of best New York songs.

Originally a single release by the band The Postal Service, singer-songwriter Iron & Wine’s cover version also received a lot of attention. Not only was it used in Zach Braff’s film Garden State, but it also appeared in commercials for M&Ms and the website Ask. The song is a reflection on love and how the closer you look at it, the less perfect it appears.

Artists Guy Sigsworth and Imogen Heap collaborated in 2002 to form the group Frou Frou. After only one album, though, they split. ‘Let Go’ appears on that album (Details), and it appears in Garden State during a final scene when protagonist Andrew and his quirky love interest Sam share a kiss at an airport.

Related: Here are the best songs about planes.

“Well, the rain keeps on coming down. It feels like a flood in my head.” Bonnie Somerville’s poignant ballad plays during the end credits of Zach Braff’s film Garden State. It’s an introspective tune that goes perfectly with the movie’s reflective tone. The theme of “It’s a long way home” is also present throughout the song, which pairs well with Zach’s character Andrew, who travels back home to New Jersey for his mother’s funeral and subsequently does a lot of soul-searching.

Related: See more on our list of home songs.