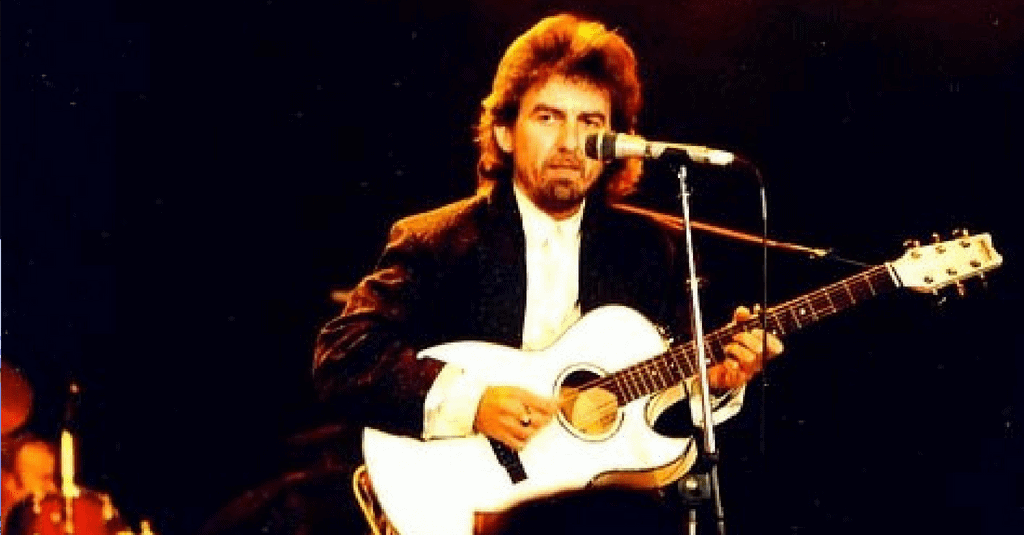 George Harrison didn’t quite get all the recognition he deserved during his lifetime. While McCartney and Lennon continue to gobble up most of the credit for the juggernaut legacy of The Beatles, hardcore Harrison fans are typically happy to sit back and enjoy his profound musical contributions without the hype.

Citing a diverse set of guitar influences like Django Reinhardt and Chuck Berry, the man often referred to as “the quiet Beatle” is responsible for crafting some of the most beloved Beatles songs and regarded as one of the best guitarists ever.

If you’re interested in learning how to play the guitar like George, you’ll want to read on. We’re going to share with you the guitars, pedals, and amps the iconic Beatle used, as well as a bit of background about the great man.

Born in Liverpool, England in 1943, he was the youngest of four children. When you learn that his mother worked as a shop assistant and his father was a bus driver, his success and profound impact on music becomes even more incredible.

His mother is said to have been hugely supportive of his musical interests from an early age. According to Pattie Boyd, George’s first wife, his mother was particularly supportive: “All she wanted for her children is that they should be happy, and she recognized that nothing made George quite as happy as making music.”

He attended the Liverpool Institute High School for Boys where a music class was offered, but with no guitars. This disappointed him, and he later said the school “molded boys into feeling frightened.” In 1956, he heard Elvis Presley’s “Heartbreak Hotel” and became obsessed with guitars.

Later that year, his father bought him a Dutch Egmond flat-top acoustic guitar and his life was changed forever. The guitar was not fancy by any means, and it was purchased for £3.10, which is about $150 in today’s currency.

He met Paul McCartney on a fateful bus trip to school. George was just 15 years old when he first auditioned for The Quarrymen, the band that would later become The Beatles.

John Lennon is said to have not wanted Harrison in the band because he was “too young,” but his persistence paid off and was later accepted into the group. In defiance of his father, George dropped out of high school at age 16 and the group started going by The Beatles and touring seriously by 1960.

Harrison’s guitar prowess was developed during long sets the band played in Hamburg, Germany when they were establishing themselves as a group. In 1961, he purchased what he later called his “first good guitar,” a 1957 Gretsch Duo Jet that he bought from a sailor returning from America.

“One night I saw an advert in the Liverpool Echo,” Harrison later said in an interview, “and I rushed right over to see it… I bought the Gretsch Duo from a sailor who had bought it in America and brought it back. It was my first real American guitar—and I’ll tell you, it was secondhand, but I polished that thing. I was so proud to own that.”

The Duo was indeed a massive step up from any of his previous guitars. DeArmond Model 200 single-coil pickups gave the instrument a stunning clarity that most other electric guitars were capable of producing.

George would hold on to this guitar until his death in 2001, and it would later be featured on famous Beatles songs like “Please Please Me,” “I Saw Her Standing There” and “Twist and Shout.

In 1962, both Lennon and Harrison ordered matching Gibson J‑160E acoustic-electric guitars from Rushworth’s Music House. Rushworth’s was one of the few stores in Liverpool where musicians could buy American-made instruments, and the guitars had to be shipped in from America.

The guitars weren’t cheap. Adjusted for inflation, the cost was nearly $4,600. Harrison played this guitar on some of The Beatles’ most iconic songs including “Love Me Do,” “P.S. I Love You,” “Please Please Me,” “And I Love Her,” “Michelle,” “Girl,” “I’m Only Sleeping” and “Yellow Submarine.”

When The Beatles performed on The Ed Sullivan Show in the winter of 1964, owner of the Rickenbacker guitar company Francis C. Hall arranged a meeting with the band to show off the new 12-string guitar, a Rickenbacker 360/12. George didn’t end up attending the meeting due to illness, but John thought the guitar was a great match for him and arranged for him to see it later.

“So it was the man from Rickenbacker who brought these guitars ’round for me,” George later said. “As for my Rickenbacker 12-string, I started playing it for the first recording sessions we did after we returned from those three Sullivan shows we did in ’64.”

This guitar is featured on songs like ‘A Hard Day’s Night’ ‘Can’t Buy Me Love,’ and ‘You Can’t Do That’.

In 1965, George and John bought matching Fender “Rocky” Stratocasters. Worth around $3,000 today, the strats were most prominently featured on “Nowhere Man” and other songs on Rubber Soul.

“If I’d had my way,” he said in an interview, “the Strat would have been my first guitar. I’d seen Buddy Holly’s Strat…on the ‘Chirping’ Crickets album cover, and tried to find one. But in Liverpool in those days, the only thing I could find resembling a Strat was a Futurama that had strings about a half an inch off the fingerboard.”

While recording Sgt. Pepper’s, George painted the guitar with day-glo colors and started referring to it as “Rocky.” His artwork went on to inspire a new generation of psychedelic rock musicians including Eric Clapton. In 1968, Fender gave him a model of its new Telecaster in an attempt to get the word out about the new instrument. Custom built specifically for him, after receiving the guitar he used it in recordings for Let It Be and Abbey Road.

George can be seen playing this guitar in the rooftop sessions of the film Let It Be. It’s featured in songs like “The Long and Winding Road,” “Let It Be” and “Dig a Pony.” In 1976, far into his post-Beatles solo career, he can be seen playing a Martin D-35S with Paul Simon on Saturday Night Live. The two iconic musicians performed “Homeward Bound,” a tune written by Simon.

Harrison enjoyed one of the longest and most storied careers in music, and due to the massive range of musical styles he explored, there’s no one guitar you can purchase to sound exactly like him.

You don’t need to purchase these exact models to sound like George. If you’re interested in replicating the sound of early Beatles, most inexpensive electric models will do the trick. Though it certainly comes with its limitations, something like the Epiphone Les Paul Special-II will do.

For mid-late Beatles, you’ll want to look for an electric guitar that’s able to produce clean, undistorted tones. Something like the Epiphone Les Paul Standard or a Vintage V100 (which is a Les Paul Copy) would work just fine.

If money isn’t much of a concern and you’re looking a way to honor Harrison’s “Rocky” era, the Fender American Professional Stratocaster will do the trick. Like “Rocky,” this guitar incorporates sleek classic styling elements but with a modern design that delivers superior sound features. There are plenty of Strats available at varying prices, so don’t think you have to drop a ton of money to get one.

As far as acoustic guitars go, something like the Taylor 110ce will give you the sound quality and performance you need. Taylor’s produce some of the most consistently great acoustics on the market, and this model features electric connectivity just like George’s Gibson-J160E.

And who can forget George’s relationship with the sitar? He played the instrument on songs like “Norwegian Wood,” “Tomorrow Never Knows,” “Love You To,” and “Within You, Without You.” This incredible instrument isn’t something you’re going to be able to find at your local music store, but there are plenty of decently priced options available on the internet.

The first amp George is said to have used consistently is the Vox AC30. Though it sports the Vox moniker, the company commissioned it to be built by Triumph Electronics. It’s featured on early Beatles gems like “Please Please Me,” “From Me To You” and “She Loves You.” Known for its punchy tone, the AC30 was a much sought after piece of music equipment back in the late ’50s.

Sticking with the Vox brand, he later used a Vox UL730 for his recording sessions on Revolver and Sgt. Pepper’s. The good news is that the exact model George used is now for sale. The bad news is that it’s currently selling for $112,000.

Possibly the most famous amp he played with is the Leslie 145. This rotating speaker cabinet can accommodate guitars and keyboards, and Harrison used one for the Let It Be and Abbey Road sessions.

Lucky for us, Vox is still hard at work making high-quality amps. You can pick up the AC30 at most major music retailers or online. The UL730 that Harrison played during the Sgt. Pepper’s sessions hasn’t been in production for some time. To produce the hard-hitting sound of the 730, most amps offered by Orange are up to the task. The Orange TH30 Guitar Amplifier Head is a great option.

Though it’s not being manufactured anymore, you can still find the Leslie 145 for sale if you look hard enough. You’ll need a lot of money, to buy one, though. The Motion Sound Pro-3X – 45W Rotary Horn Speaker is a great substitute for the Leslie. Its dual rotor option is designed to mimic the sound of the Leslie, and it boasts a slew of additional options that the Leslie doesn’t include.

The Beatles were musical and cultural innovators, and this pioneer spirit wasn’t purely confined to the songs they produced. The musical equipment they adopted early on helped popularize things like guitar effects pedals.

Distinctly harsher than distortion or overdrive, an early favorite effect pedal used by George was the fuzz.

Specifically, the Maestro Fuzztone pedal. He used this pedal to help kick up his solos a notch. Due to its harsh sound, he most likely used it at low volumes.

He’s also known to have used a Fuzz Face (popularised by Hendrix and still one of the best fuzz stompboxes out there).

The most basic effect pedal he used was the volume pedal.

Legend has it the while recording “Yes It Is,” George wasn’t able to play his guitar part and control the volume pedal at the same time, so John had to step in to help.

During the Let It Be sessions, George experimented with a basic wah-wah pedal, but the vast majority of Beatles guitar effects were produced by amplifiers and in post-production.

Though he was known as the “quiet Beatle,” George’s musical contributions are still being heard in today’s music loud and clear. Music from his work with The Beatles as well as his solo albums continues to sell and inform artists making music today in a variety of genres. In 2017, Sgt. Pepper’s Lonely Hearts Club Band and Abbey Road snatched the top two top spots for U.S. vinyl sales.

But as tempting as it is to think that equipment played a roll in Harrison’s incredible musical contributions, in truth, his amps, pedals, and guitars were secondary to his intuition and pure talent.

Let’s finish with this tribute video to George Harrison from 1997, a few years before his death. It’s a great interview (ignore the video and audio quality). He touches on some deep stuff (consciousness, knowledge, etc.) as well as some interesting tittle-tattle about dealing with fame (there were four of us, Elvis was by himself) and some insights into the Concert for Bangladesh that he organized.

The video finishes with a lovely impromptu jam (he wasn’t even planning on playing, but a friend of one of the crew had a guitar to hand, so he played for them). The final song, ‘All Things Must Pass’, says it all. Pure bliss.