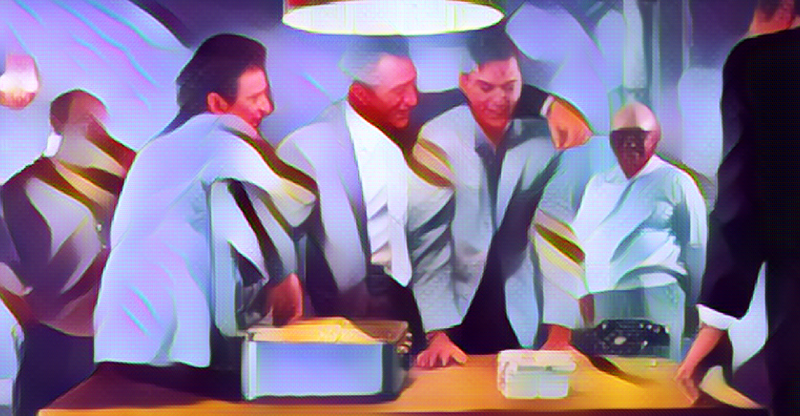 Goodfellas is one of the most iconic movies of all time directed by the masterly Martin Scorcese and featuring Robert De Niro, Joe Pesci, and of course the late, great Ray Liotta. The story follows a group of gangsters and is based on the book Wiseguy. As you’re about to find out, the soundtrack to the film is just as strong as the film itself.

From authentic Italian opera to classical rock and doo-wop music, take a listen to the epic Goodfellas soundtrack below. And just remember, “never rat on your friends”.

Songwriting duo Richard Adler and Jerry Ross penned this tune in the early 1950s. Tony Bennett recorded his version in 1953 on his album The Essential Tony Bennett, which ultimately reached the number one spot on the charts. The movie opens with this song as you are introduced to one of the main characters.

Can’t We Be Sweethearts – The Cleftones

This classic R&B song by 1960s group The Cleftones was used in the movie though it doesn’t appear on the official soundtrack. ‘Can’t We Be Sweethearts’ plays in the background during an exchange between Henry (Ray Liotta’s character) and his father. The pop-Motown sound of the song pairs well with the vintage Cadillacs featured in the scene.

Related: Love some soul? Then head on over to our best Motown tracks.

This popular 1950s pop song plays during one of the more lighthearted scenes of the movie as the gangsters all meet up for a barbeque at Paulie’s home. This doo-wop-inspired tune made its way to number one on the charts in 1953. Two years later, though, The McGuire Sisters released the best-selling version of the song.

‘Firenze Sogna’ plays in what ultimately became one of the iconic scenes in this gangster flick. The movie contains many highly quoted lines, and this Italian number plays while the gangsters are trying to get rid of a body. After one of the handlers tries to cover it up with aprons from the restaurant, one of the characters famously says in true mobster fashion, “You wasted eight aprons on this guy?”

Related: Head over to our playlist of songs about getting in trouble.

Hearts of Stone – Otis Williams and the Charms

Not even the mailman is safe in Goodfellas! ‘Hearts of Stone’ plays while one of the main characters’ mailmen is threatened. Before this song’s release, Otis Williams and the Charms had several flops. The Jewels were the first to record the song, but once The Charms got a hold of it, they sold over 1 million copies of the single.

Robert De Niro’s character is introduced as ‘Speedo’ plays. De Niro’s character, Jimmy Conway, has become one of the most recognizable gangster characters of all time. This famous tune was released in 1955 and featured the Jesse Powell Orchestra on the track. Audiences loved the song due to its groovy beat and impeccable harmonies.

The Italian artist Giuseppe di Stefano had two songs featured in the movie. ‘Parlami d’Amore Mario’ plays during a flashback scene for Ray Liotta’s character, Henry. A young Henry is depicted getting busted for selling cigarettes during the scene. Di Stefano was a legendary opera singer referred to by many as “The Golden Voice.”

One of the locations central to the classic gangster film was the fictional Bamboo Lounge. A “way station” posing as a nightclub was a drop-off location for tons of illicit goods gangsters would resell for a huge profit. As ‘Playboy’ can be heard in the Bamboo Lounge scene, Henry and Tommy burn down the restaurant!

Related: Jump into the fire with these songs about heat or fire.

Stardust – Billy Ward and his Dominoes

Nat King Cole originally recorded ‘Stardust’ with Billy Ward and his Dominoes, releasing their own version just a year later in 1951. The song plays as viewers are introduced to Ray Liotta’s character Henry for the first time, all grown up. The scene takes place at an airport where some shady business involving a truck hijacking is going down.

It’s Not for Me to Say – Johnny Mathis

‘It’s Not For Me To Say’ plays as we are introduced to the wife of the main character, Henry. Karen Hill plays a pivotal role in the movie, based on the true gangster story covered in the book, Wiseguy. This 1957 pop song reached number five on the Billboard Top 100 chart and originally appeared in the ’50s film Lizzie.

This World We Live In (Il Cielo in Una Stanza) – Mina

‘This World We Live In’ plays as viewers are taken back to one of the film’s central locations, the Bamboo Lounge. As we get a behind-the-scenes look at how gangsters secretly handle business, the men plan a huge heist for Air France. This song is performed by the famous Italian singer Mina, who began her career in the late ’50s and is still active as of the early 2020s.

The tumultuous relationship between gangster Henry Hill and his wife Karen is one of the overarching themes in this crime caper. ‘I Will Follow Him (Chariot)’ plays during a scene between the two lovers early on in the relationship before they are married. They had plans to go out on a date, but Henry stands Karen up. Instead of sulking, she publicly confronts him about it.

Related: Love isn’t easy for couples, so here are some songs about life being hard.

Then He Kissed Me – The Crystals

This classic pop song accompanies professional gangster Henry and his blossoming relationship with his love interest, Karen. As the couple arrives at the famous Copacabana, ‘Then He Kissed Me’ can be heard in the background. Famous producer Phil Spector oversaw the production of this tune. The Crystals’ lead singer La La Brooks was only 15 years old when she recorded the song with Spector.

Related: Find this song on our playlist of kissing love songs.

Life is But a Dream – The Harptones

The Harptones were a doo-wop group out of New York that had much success in the 1950s. Their song ‘Life Is But a Dream’ plays in the movie during an emotional scene at Henry and Karen’s wedding. Harpstones member Raoul Cita wrote the tune in 1955 while recording their self-titled album.

Look in My Eyes – The Chantels

The planning and execution of the Air France heist play out throughout much of the movie. ‘Look in My Eyes’ is included in one of those scenes in which gangster ally Paulie is looking to get his cut from his role in the robbery. The Chantels had a couple of major hits, including their song ‘Maybe.’

Leader of the Pack – The Shangri-Las

The Shangri-Las’ tune ‘Leader of The Pack’ pairs perfectly with a scene when Karen Hill meets other mobster wives at a “hostess party.” The song is about the ultimate bad boy no parent wants their daughter to date. The song echos this sentiment with Karen’s classy “old money” mentality, being horrified at the wives’ flashy, gaudy “new money” attitude.

Related: Don’t get too greedy when listening to these songs about wealth.

‘Roses are Red’ plays through a scene featuring Henry and Karen Hill. It takes place at the Copacabana, a famous actual nightclub used in many gangster movies. The song plays in the background as the couple receives the royal treatment at the club, complete with fancy champagne.

Related: Roses are red, violets are blue, you’ll love these songs with flowers, too!

Remember (Walkin’ in the Sand) – The Shangri-Las

‘Remember (Walkin’ in the Sand)’ plays as Henry meets his mistress Janice Rossi at a hotel before taking care of some pretty dirty gangster business. (It’s stated that Friday night is for the girlfriend, after all!) The Shangri-Las had two different song placements in the movie, including this tune and their hit ‘Leader of the Pack.’

Baby I Love You – Aretha Franklin

Legendary soul singer Aretha Franklin’s tune ‘Baby I Love You’ can be heard during a scene when we get to know gangster Henry Hill’s mistress a bit more. As viewers watch Janice Rossi hang out with friends at her apartment during a poker game, the song plays, and we are introduced to another character, Spider, who is also based on a real-life gangster.

Related: Jam with these hit songs with the word baby.

Beyond the Sea – Bobby Darin

‘Beyond The Sea’ was originally a French song called ‘La Mer’ by Charles Trenet. The song became popular in America in 1959 when singer and performer Bobby Darin released the English version. The song can be heard when Henry goes through some tough times and starts participating in small-time gangster activity to make ends meet.

Related: Swim over to our playlist of the best songs about the sea.

Sunshine of Your Love – Cream

Before blues-rock guitarist Eric Clapton went solo, he played in the British rock band, Cream. ‘Sunshine of Your Love’ was one of their most well-known tunes. The song can be heard in Goodfellas as gangster Jimmy (Robert De Niro) contemplates what to do about one of his associates who has stepped out of line.

Related: Feel the warmth of the best songs about sunshine.

Henry Hill was a charmer. Though he was married, he entertained several ladies, including “Sandy,” which is one of the times in the movie you hear Muddy Waters’ blues classic ‘Mannish Boy.’ Another scene featuring the Hill family eating dinner also has the song playing in the background. ‘Mannish Boy’ is one of the most popular blues songs of all time, with countless artists covering the classic song.

Related: If you love the blues, you simply must check out our playlist of the finest blues music of all time (which includes Muddy Waters, of course).

Towards the end of this epic tale, as all of the illicit activity (like hiding dead bodies) begins catching up with the gangster families, Eric Claptons’ ‘Layla’ plays. Though he has released live versions of this song as a solo artist, he first released this high-energy track when he was part of the band Derek and the Dominos.

Related: See this song on our playlist of songs with girl names in the title.