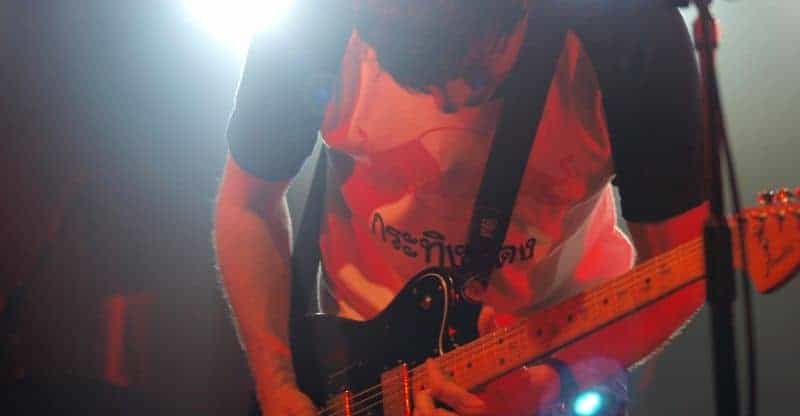 Graham Coxon has been hailed as one of the greatest British guitarists of the 90s. With his band Blur he became one of the driving forces of the Britpop genre. Although this fantastic little era of music more or less vanished, it did produce some of the best guitar riffs and creative uses of equipment ever heard.

Coxon stood right at the center of this maelstrom of music. Although he freely admits to the fact that once upon a time he had literally no idea how to choose his equipment, he quickly learned to select the bits and pieces that best worked for him.

In this article, we’re going to pull back the cover on how he creates his trademark sound, and show you the bits of gear he uses to do so.

Coxon was absolutely enamored with Telecasters and is key to his cheeky, chirpy upbeat riffs. The legendary Telecaster has an unassuming tone which elevates in a way that’s harder to do with more aggressive guitars.

Authentic vintage Tele’s have a knack for turning up in the hands of the greatest musicians, and there’s a reason for that.

These guitars, made in the 50s, have an immense range, thanks to the tone controls and pickups. They were also mass-produced in a manner that had never been done before by rivals such as Gibson or Rickenbacker.

Vintage Tele’s are affordable, easy to repair and have the right combination of pickups and tone controls to create the type of sound you need. They are very capable of going from light and melodic to having a powerful ‘cut’ through other musicians, ensuring that the guitar sound is never drowned out.

Coxon also favored a 1968 model he owned. Unlike the earlier model, this one featured a humbucker pickup in the bridge position. This allowed for a slightly thicker and warmer sound, whilst still enabling a lot of the brighter tones that would be produced by an all single-coil guitar.

If you want the same sounding guitar, check out his signature Telecaster model. The design is built on the foundations of the 1969 Tele that he owned, but the pickups have a unique configuration.

In the neck position, we have a Seymour Duncan SH-1 Humbucker, and in the bridge are retro-sounding single-coil pickups. This combination gives you a lot of versatility.

Coxon’s also been known to make use of a few Gibson guitars, although he’s never given them quite the same level of praise as his beloved Telecasters. Despite that, he has chosen some of the greatest Gibson guitars around – including the SG Special.

His was a 1962 model. These vintage versions are less budget-friendly than the newer versions and include some stylings which are now absent.

Overall, they have a much darker and heavier tone, influenced in part by the use of P-90 pickups, which lack the same level of brightness that can be seen in the single-coil designs used in the Telecasters. His soft spot for P90 pickups is probably why he never got stuck with the “jangly” descriptor like his contemporary Johnny Marr.

One of the most recent developments was his custom made ‘Grayling’ by Gray Guitars.

It takes inspiration from a few different sources, but in terms of structure, its biggest influence is the Gibson ES-335 due to the solid central area and hollow sides – although the Grayling lacks the f-holes.

This guitar has a punchy, almost raw sound with strong sustain, but holds the clarity of each individual note quite well.

He has been known to play a Gibson ES-335 as well, so if you’re looking for something that approaches the sound of the Grayling, and you have the cash, that’s worth a try.

Although their use is rather sparse in comparison, featuring fairly standard chord strumming in his work with Blur, Coxon did have a special affinity for acoustics and particularly enjoyed developing his technical ability as a fingerstyle guitarist.

His acoustic guitars have featured more heavily in his solo work, and you can see the time and effort he put into mastering a new skill set, showing that he wasn’t only creative, but also a hard worker who would dedicate the time to mastering his technical proficiency.

Ralph Brown’s guitars have built up a reputation for being excellent quality – although they aren’t the easiest things to get hold of, due to the fact that he doesn’t have much of an online presence. Getting your hands on one is likely to require a trip to New York to visit his workshop.

If you’re looking for something a little bit more mainstream, but one that is equally good, you could take a look at the Martin OM-28. This was one of Coxon’s first acoustic guitars and was the one that he developed his fingerpicking technique on, so you’re in good hands.

GC was also spotted playing a Gibson J-160E, and performed acoustic versions of one of Blur’s most well-known songs, ‘Parklife’ using it on an MTV performance back in the early 90s.

Coxon is a fan of using heavy top/skinny bottom Ernie Ball strings. These, as the name suggests, give you an interesting mix of the qualities of light and heavy gauge strings.

You’ll need a decent bit of finger strength for barre chords, but this allows for a much warmer and thicker aspect of your guitar playing to come through, whilst still allowing for the delicate and intricate work that comes with a good lead line.

When stringing his acoustics, he opts for a copper/zinc set (e.g. Elixir Light Nanoweb 80/20 strings) to provide a punchy sound. This is unusual but not unheard of, and you’ll find many fingerstyle guitarists who choose the same type of strings.

During Blur’s heyday, Coxon wasn’t particularly adventurous with amps. He mostly went with the same setup in every gig: a pair of Marshall 1959 Super Line reissues. These aren’t the best amps ever made, but you can sometimes get the Marshall 1959 HW model for a more reasonable price without sacrificing the raw vintage tone that’s powered British rock for decades.

In terms of speakers, he would normally have these connected to Marshall 1969 speakers – the 4×12 version. Marshall also produced a column version of these speakers, but they are far less practical.

If you’re looking to replicate the tone of these, there’s no need to go for this exact head/speaker combo – there are many good Marshall amps out there that still have the same capabilities and you don’t need to go for vintage models each time. In fact, if you’re on a budget a good combo amp with modeling capabilities will get you part way there.

Coxon has recently been known to use combo amps himself. Of particular note was the 1962 Bluesbreaker, also by Marshall.

This amp has quite a history, first shooting to fame in the capable hands of Eric Clapton, and it quickly carved out a spot for itself in the annals of rock and roll history. Since then, it’s been used by countless musicians.

Since the Blur reunion tour and in his solo work, we’ve seen that Coxon hasn’t lost his touch. In fact, he’s become more assertive and that comes through in his creative use of effects.

His footwork on the pedals is on par with his playing ability. Like any Britpop lad worth his salt, he’d have made a decent football player. His extensive use of different effects carries the torch that the 1980s shoegazer music once held – although not to quite the same degree, as GC doesn’t spend his entire time performing with his head down watching his pedals.

His custom pedalboard stands out, as it’s not the sort of thing that every guitarist would consider being worth that level of expense. But, when you think about it, the pedalboard itself can be the whole foundation for your effects line up.

When we take a look at his range of effects, there are a few that stand out. It would be impossible to ignore his DOD FX76 Punkifier, which featured heavily in ‘Song 2’.

The transition is probably one of the least subtle use of effects ever heard – but it’s all the more brilliant for that. With this pedal (in conjunction with a few others), he transforms his guitar into… some sort of weird buzz? I don’t know how to describe it exactly, but it’s so lo-fi sounding that it made Black Metal musicians jealous.

Let’s indulge ourselves and take a listen to Song 2:

Alongside the Punkifier, he makes frequent use of a ProCo RAT II Distortion pedal – which just further adds to that filthy guitar tone. Although it’s often associated with metal, his playing style puts his own stamp on it.

There’s one very good reason why Coxon uses so many Boss pedals: they get the job done and they do it reliably. They tend to be built like a tank.

The other thing that makes them great is that they use the stomp-box style footswitch, rather than the more delicate buttons that you’d find on other brands such as Electro-Harmonix.

Granted, he does use a few of their pedals as well, but it’s just so much easier to hit a Boss Pedal and not have to worry about anything.

He’s a user of the Boss RV-5 which has a much larger range of reverb styles to choose from as a digital pedal, and this fits well with an experimental guitarist like Coxon.

The Electro-Harmonix pedals he uses are the Holy Grail reverb and HOG2 Octave.

The Electro-Harmonix Holy Grail is analog, and although it has a far more limited selection of reverbs to choose from, the tone of those has been fine-tuned to a greater degree.

One of his more interesting pedals is the Shin-Ei FY-2 Companion Fuzz, which is nigh impossible to find for sale these days, as it was discontinued a long time ago.

Even more frustrating, there are two different versions of the pedal which sounded wildly different to each other – so if you ever do find one, you’ll definitely want to play it first to see which one you’ve got.

It’s most likely that you’ll come across the silicon transistor variety – but if you wish upon a shooting star, sell your soul to the devil and find a genie in a lamp, you might just get hold of one of FY-2 pedals that used the Germanium transistors instead.

Since there’s almost no chance of that actually happening, you might want to look into the various FY-2 clones out there instead. It’ll save you a lot of time and money.

Perhaps even more useful for the average guitarist is Coxon’s use of a couple of a Line 6 effects pedals, the DL4 Delay Modeller and the FM4 Filter Modeller.

Each of these pedals, as the names suggest, model the unique characteristics of dozens of other effects pedals in their category.

This will save you a ton and give you access to a wide variety of creative options.

Of course, it’s slightly less limited than actually having a huge collection of pedals you can chain together in any weird and wonderful combination. It’s also never going to be exactly the same as having an authentic analog pedal, but they are well worth the money compared to what each of the original pedals would cost individually.

We hope you’ve enjoyed this guide to some of Coxon’s sound and the gear he uses. We’ve by no means exhausted the list of gear he uses, but if you want to replicate this sound, you’ll be well on your way.