All You Ever Wanted to Know About Guitar Fretboard Woods 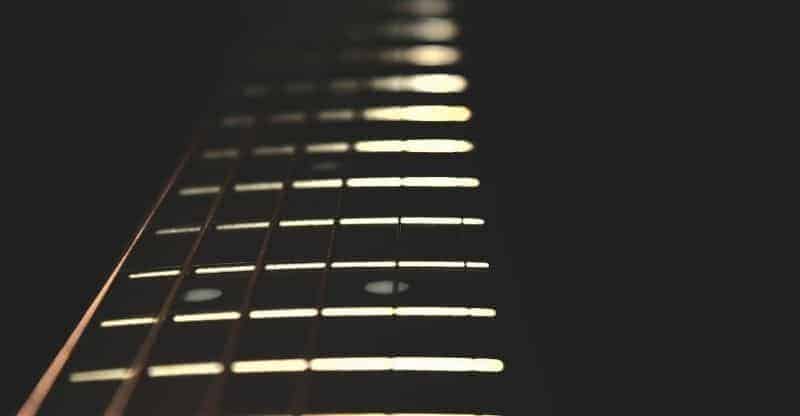 Does the choice of fretboard wood make any difference to the guitar’s tone?

There’s a range of factors that go into the sound of a guitar.

Things like the gauge of strings you’re using, and even the type of nut, will add or remove something from the sound.

The choice of fretboard wood plays its role, of course. The density and porosity of the wood can affect sustain, response, and articulation.

Especially for the acoustic guitar.

With acoustics, the sound is a more ‘natural’ result of the instrument. Not so much with the electric guitar, where the use of pedals and amps often masks (but not always) a lot of the natural sound of the instrument.

In this article, we delve into the main types of guitar fingerboard wood and tell you all you need to know.

Rosewood has been the wood of choice for fretboards for many years now.

It’s relatively easy to source and far cheaper than a lot of other types, hence why you find it used in a lot of budget and mid-range guitars.

As a hardwood, a rosewood fretboard is heavy and sturdy and as for tone, it produces a satisfyingly warm, rich, and balanced sound. It has a grainy texture with a distinctive reddish-brown color.

As for feel, it’s quite an oily wood. This oily texture means it won’t dry out too easily and doesn’t require a finish applied to it.

The majority of rosewood you see is Indian rosewood, but Brazilian rosewood plays and sounds a little better, but is preferred but rarer, ever since the CITES treaty.

CITES, (or the Convention of International Trade of Endangered Species of Flora and Fauna) is an international law that protects the trading of rare species and woods.  Brazilian Rosewood was added to the list in the early 1990s, so exporting this wood from Brazil is now forbidden. All types of rosewood were based more recently, but CITES lifted the ban in 2019 – Brazilian rosewood is still banned though. Read more about CITES here

If you insist on finding a fretboard in Brazilian wood, you’ll have to find an older guitar that was made before the law came into effect (before the 90s).

As such, many vintage guitars have Brazilian rosewood.

Ebony was the fretboard wood in use from the 15th century until the dominance of rosewood took over in the twentieth century.

Tone-wise, an ebony fretboard is bright and snappy with superb sustain. It’s incredibly responsive too.

As for looks, it’s dark – considerably darker than rosewood. It has a ‘slippy’, oily texture which is superb for moving effortlessly around the fretboard.

However, all this goodness comes at a cost. It’s the most expensive wood type of the lot, hence why you find it used on a lot of high-end guitars.

Fender introduced maple necks to their lineup of guitars in the 1960s – notably the Fender Stratocaster and the Telecaster, which have both featured maple fretboards at various times.

As for tone, a maple fretboard is twangy with brightness in tone and a prominent high-end attack (plenty of bite and snap). This is partly where the Tele gets its classic tone from.

Its appearance is quite striking too, it’s very light in color (creamy white).

One of the downsides to maple is it requires a finish to prevent it from warping, especially in high humidity settings. It’s also known for showing signs of aging but some say this just adds to the aesthetic appeal.

If you’ve bought an entry-level Fender guitar in the last few years, especially if it’s a MIM (made in Mexico) there’s a good chance it has a Pau Ferro fretboard.

This is partly because in 2017 CITES (see above) brought in additional restrictions to the trading of Indian Rosewood (which has since been lifted). This forced guitar manufacturers to rethink the woods they used, and the use of Pau Ferro.

The good news is that Pau Ferro is surprisingly similar to rosewood anyway. It’s a south American wood, also known in some circle as ‘Bolivian rosewood’

Tonally, it’s slightly brighter than rosewood (with a tighter grain that gives you a snappy, bright tone) but with the same depth and warmth.

It’s harder than Indian rosewood with similar oil content, but lighter in color (though it can vary in appearance from light brown wood grains to darker streaks. Some even say orange!)

On looks alone, it’s pretty tricky to spot the difference as you can see in this comparison video below: