The 3 Main Guitar Headstock Types and How They Compare 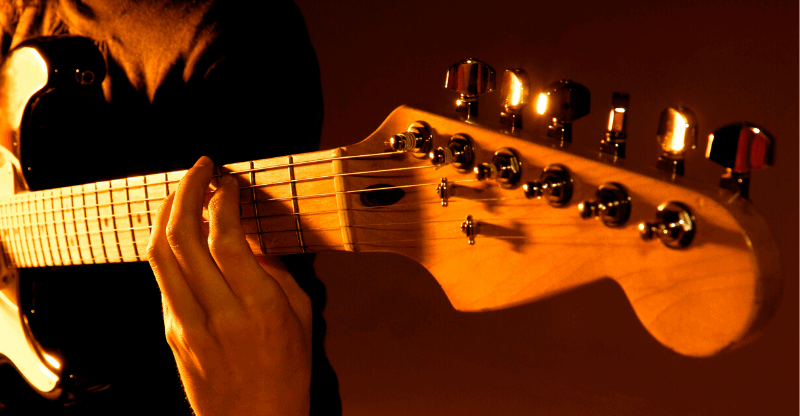 Nearly every guitar course for beginners starts out with a basic introduction to the instrument’s parts.

That makes a lot of sense.

An understanding of how each part of the guitar functions is not only good knowledge to have as a guitarist, some parts have a direct impact on the tone you produce as you play.

The headstock is, somewhat surprisingly, one such part, and plays a crucial role in the overall sound of the instrument.

In addition, the one you have – there are three broad guitar headstock types that we show you here – have an effect too.

In this article, we’ll describe the three basic types in detail. We’ll explore the benefits and downsides of each type by understanding how each one is produced.

What is a Guitar Headstock?

The headstock is where the strings start (or end, depending on how you look at it) and supports the tuning machines, located at the upper portion of the instrument’s neck.

It’s sometimes where spring-loaded capos are put when not in use, too.

Headstocks vary in size and shape, depending on the type of guitar and the manufacturer.

It’s also where the serial number of the guitar is often found (if you have a Fender guitar, use our Fender serial number check tool to verify the date and place of origin).

There are three main types:

The first two are usually jointed (meaning the headstock and neck is one long piece of wood) and is the most common for mass-produced guitars as they’re cheaper to produce. The scarf design is actually two pieces glued together and found on a lot of mid to high-end guitars.

As the name implies, a straight non-jointed headstock is not angled at all. It’s produced using a single flat piece of wood to create both the neck and the headstock of the guitar.

Because it’s basically one single piece of wood, they’re cheaper to produce and one of the reasons many manufacturers produce guitars with straight ones. Fender used this design with their hugely popular Stratocaster, and strove to make their headstocks from a 1-inch (25.4mm) thick piece of maple. The straight variety also works better with a tremolo bridge.

Furthermore, straight ones from a whole, unsawn section of wood are, in theory, more structurally sound than other types, as the integrity between the headstock and the neck is completely solid (the same grain running through the neck runs through the headstock, giving it strength).

If you managed to drop one (try to avoid it!), it would be much harder to break one of these as it’s basically one plank of wood.

This design has it’s downsides, however.

The lack of angle means the strings take an almost straight path to the machine heads from the nut, resulting in less pressure on the nut. In some circumstances, the strings can actually pop out of the nut, especially when playing large bends.

String trees that increase the downward angle go some way to remedy this, but they can cause problems of their own (they introduce unwanted friction, and knock the guitar out of tune). Aftermarket staggered tuners can also help with this.

An angled or ’tilted-back’ headstock has an angled non-jointed neck, and because of the angle (and increased pressure on the strings) it generally creates more sustain and offers a solution to the inherent flaws of the straight design (see above).

This is why the Les Paul (which has one of these) and the legions of Copies thereafter gives you more sustain than say a Telecaster.

Like straight headstocks, these angled ones are made using a single whole piece of wood. However, in contrast to the straight variety, the difference lies in the angle (from 4-17 degrees).

With a slight angle, the strings are slotted deeper into the grooves of the nut, keeping the string in place much better and making them less likely to slip out of tune.

However, even these angled types have their issues.

The angle creates a considerable amount of tension on the neck of the instrument. The short wood grain located between the neck and the headstock is also weak right where the guitar is at its thinnest.

With higher-end guitars, especially those made for metal such as Ibanez and Schecter, angled headstocks are strengthened with the addition of a ‘volute‘ – this is where the wood is left thicker around the nut.

Another downside is that the design is more expensive to produce. They require more material to create the angle, and the method results in more waste material than other methods, making production more expensive.

So is the scarf the solution to both the above?

A scarf joint is a more involved process and consists of cutting the wood (there are two places the wood can be cut, but we won’t go into that here) and creating an angled joint between the headstock and the neck which are glued together.

Sure, the scarf succeeds in stabilizing the strings and improving the overall tone (especially the sustain) of the instrument (similar to tilted-back headstocks) AND creates a more solid build than the straight non-jointed method. The result is a whole, fully fortified structure.

However, making these requires a LOT of mastery and cannot be mass-produced, hence why, while it offers the best of both worlds, you’ll only find this type on mid to high-end guitars.

It’s a fine balance of performance and cost that guitar makers and manufacturers have to balance.

We hope you’ve enjoyed this article, and it’s made you think a bit more about an area of the guitar you’ve probably, like most of us, taken for granted.