Guitar Neck Joint Types – Differences & Pros and Cons of Each 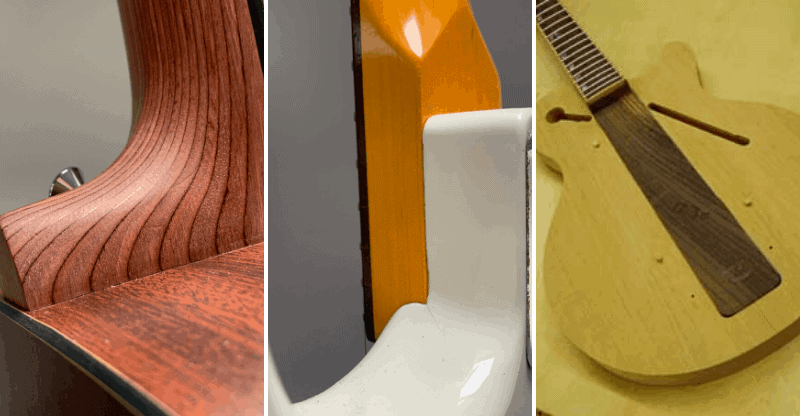 Every guitar out there has one of three types of guitar neck joint. The first is a glued on, or ‘set neck’. The second a bolted on (or ‘bolt-on’) neck. Thirdly, there’s what is known as the ‘neck-through’ or ‘set-through.’

In this article, we’re going to explore the differences between each type. In terms of construction and tone, and we’ll also discuss the advantages and disadvantages of each. We’ll also recommend which we think are the best for certain situations (gigging, recording studio, etc.)

What is the Neck Joint?

The neck joint is the intersection between the neck and body of a guitar. Its primary function is to hold the body and neck together, obviously, but there is more to it than that.

It’s more than just a physical connection holding the instrument together. The neck joint affects the transference from the vibrating strings to the pickups on the body, from high to low frequencies, including fundamentals and harmonics.

Every little technique you play on the fretboard, from hammer-ons to bends, are passed via the joint to the pickups. For example, sustain – i.e., how long a note rings out after being played – is greatly affected by the types of neck joint you have, as we’ll see below.

The first we’re going to look at is the set neck joint.

Before Leo Fender started making guitars (and way before the Fender Stratocaster timeline began), most guitars were built with set neck joints, which consists of a mortise and tenon (or dovetail joint). In other words, the tongue of the neck is glued into the groove of the body.

As you can see in the picture below, there’s a flush, tight connection between neck and body that involves joining the neck and body with a tightly fitted dovetail joint (known as a mortise and tenon), then secured with strong glue.

The seamless connection provides a steadfast hold and gives you superior resonant transfer, far better than anything the bolt-on can offer. As the vibrations can travel more freely, you get a thicker, punchier sound.

Interestingly, violin makers have been using this technique for years. Most acoustic guitar manufacturers use this style of joint, and many electric guitars adopt this style too. The most famous is the Gibson Les Paul, which has a mortise-and-tenon joint and is designed to allow more comfortable access to the upper frets on the neck.

Early Les Pauls (like the 1959 Les Paul, or a Gibson Custom Shop reproduction of the same) started with what they called the ‘long-tenon,’ which has a long extension (the tenon) at the end of the neck sitting tightly in the long neck pocket (the mortise), then glued.

Later models (mid-70s onwards) moved to a short-tenon, which they amusingly called a ‘rocker joint,’ as a large portion of the underside wasn’t glued into the pocket.

ESP, PRS are two others.

Then came the bolt-on joint, first introduced by Fender, which is a mortise and tenon cut into the area known as the neck block, which significantly helps with alignment and provides a bit of strength.

The bolts are attached through the neck block and go into sockets (then tightened) in the neck heel, but not glued, making it easier to undo bolts and switch it out should you need to.

If you own any Fender electric guitar, you’ll be familiar with a bolt-on neck. As the name suggests, it means to attach the neck to the body with screws (earlier Strat models have four screws holding it in place, while post-CBS editions favor three screws).

Leo Fender made guitars this way for one simple reason: cost. Bolt-on necks were considerably cheaper and easier to produce at scale using this construction process. Since then, many guitar makers have followed, and this style is the common one you’ll see.

Indeed, if you’re trying to manufacture the simplest and most economical electric-guitar design that will yield a functioning instrument, it’s easier to attach a neck to a slab body with screws or bolts. The untold remainder of that truth, however, is that it’s also a lot cheaper and easier to make a functional, but mediocre set-neck guitar than it is to make a truly outstanding bolt-neck model.

On the face of it, you’d think it’s easier to attach a neck to a slab body with screws. However, it’s not that simple. The fact is, as Guitarplayer.com says, it’s easier and cheaper to create a mediocre set-neck than it is to create an outstanding bolt-on neck.

The neck-through joint takes things a step further than the set-in. The neck goes all the way through the guitar rather than stopping at the usual spot, with many essential components of the guitar housed on the neck.

The continuous bit of wood lets the strings resonate more fully, with more sustain than either of the options above. It’s also better at holding tuning thanks to the increased wood stability.

Some brands embrace the design more than others, notably Yamaha (in their custom shop guitars and basses) as well as some Gibsons and Epiphones (the Firebird and Thunderbird), as well as BC Rich, Parker Guitars, Warwick and more.

This subject has caused more debate than who is the best guitarist.

A bolt-on neck design typically has more snap and twang. A set-neck, on the other hand, lets the resonance move more freely from neck to body, resulting in more warmth and fullness of sound.

The answer comes down to energy. The bolt-on type, as it’s not glued, gives more pop and attack from the string, but has a slower transference of acoustic energy. The set-neck guitar has a superior flow of energy, resulting in a weightier, warmer sound.

The tonewood of the neck has a role to play too. With a set neck, the body of the notes are fattened and rounded out, with a hint of fuzz, which is excellent for producing warmer chunkier tones.

The bolt-on is better at creating that sharp, cutting tone (aka ‘twang’) that’s symbolized by Fender guitars, especially the Tele. The slower transference of energy

We’ve made a pretty big deal here about the impact on the sound of a guitar, but of course, many other things besides neck design contribute to the overall tone of a guitar, such as choice of pickups, type of bridge, and scale length.

We hope you’ve enjoyed this read.