How to Measure Guitar Neck Width 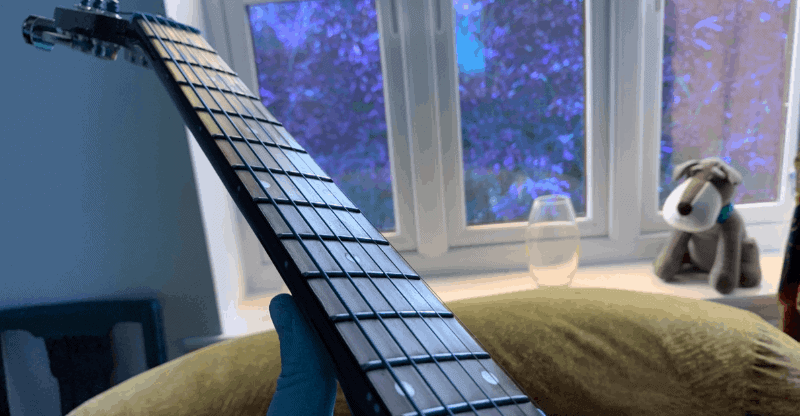 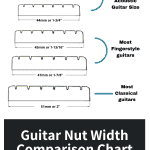 Like many things to do with the guitar, a simple question like ‘how do you measure the width of a guitar neck?’ should have a simple answer, but doesn’t.

In this article, we attempt to give you the definitive answer on how you do it.

How are Guitar Necks Measured?

However, by and large, guitar neck width is mostly measured at the nut (the nut of a guitar is the thin piece of material, often bone or plastic, that the strings slot through just before they get to the headstock).

As the neck tapers as you go down it, measuring it anywhere else can be inaccurate.

So, far so good. Is the entire guitar nut to be included in the measurement or only the bit between the two E strings?

The measurement is the entire width of the nut.

Some manufacturers do refer to the ‘E-to-E’ width as you can see below. This is useful to know for string spacing, but the key measurement is the entire length.

The Most Common Nut Widths on Acoustic Guitars

Then we come on to different widths and the role they play in the guitar’s playability.

The most common widths for steel-string acoustic guitars are typically somewhere in the middle. Standard neck width is usually either 43mm (1 11/16″) or 44mm (1.73”, more often referred to as 1 ¾”).

Nylon-string classical guitar necks are typically much wider at anywhere between 47mm and 51mm (2″), as are many gypsy jazz guitars (which incidentally are steel strung). 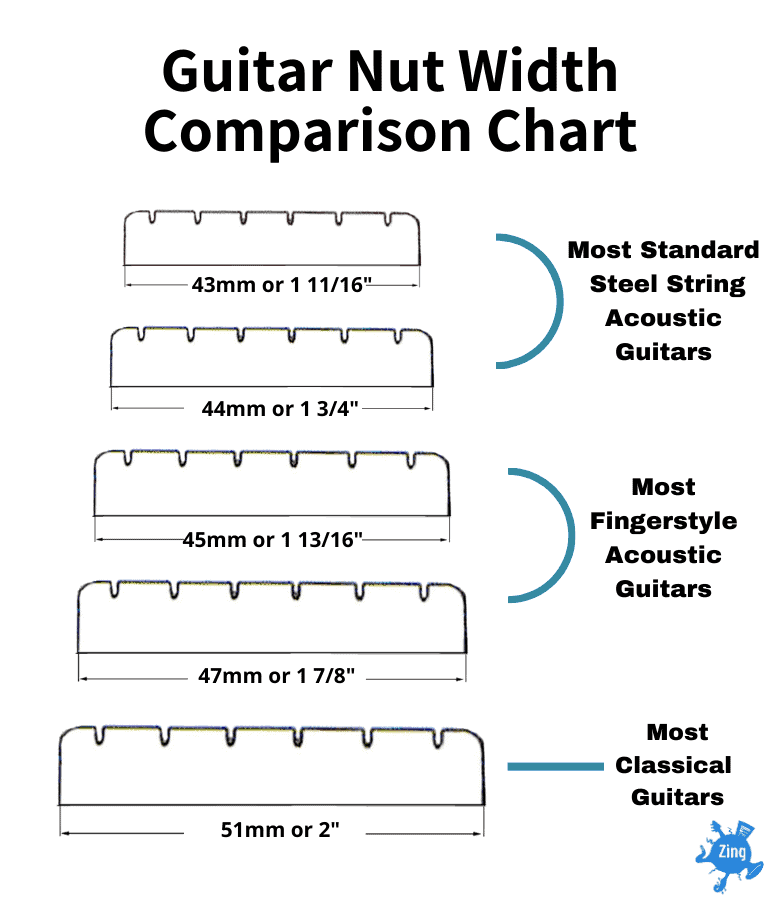 How Does Nut Width Affect How the Guitar Plays?

While any style of music can be played on any size neck width, certain neck widths are often favored for particular types of playing.

Wider neck widths are typically better for fingerstyle guitar, as the extra space makes it a lot easier to get your fingers between the strings. Wide necks are not typically used for soloing, as the pick needs to travel that bit more between strings (however, that doesn’t stop gypsy jazz guitarists but then they are using rest stroke picking).

Narrower necks are obviously far harder to fingerpick with but make lead work (using a pick) much easier as there’s less space to travel. Hence why electric guitars such as the Strat have a nut width of 43mm (1 11/16).

Ok, time to measure up. A standard ruler with 1mm / 1/16” resolution is good enough to start with, but a general-purpose caliper as you can see in the image below will get you a more accurate measurement.

Here it’s being used to measure the neck width of a Les Paul (which, like most electric guitars, is what you’d call a thin neck in acoustic guitar terms, at around 43mm)

So there you have it, who could have thought measuring the width of a guitar neck could be so complicated!

You’ll find the terms ‘neck width’, ‘nut width’, and ‘fretboard width’ used interchangeably, but now you know that most of the time that the term ‘neck width’ refers to the width of the entire nut.